Research has found that there appears to be some differential activation between memory retrieval of emotional vs. neutral information, although some obstacles have emerged that complicates the issue. One problem that researchers face in studying emotional memory retrieval is distinguishing retrieval from other memory processes like consolidation. Some studies have used very short intervals—sometimes only a matter of minutes—between stimuli presentation (when memory consolidation processes occur) and subsequent memory tests (when retrieval occurs) (Dolcos, 2004). It can be argued that this does not allow enough time to distinguish neural activation associated with consolidation and retrieval processes, thus necessitating larger retention intervals (time between presentation of stimuli to be remembered and time when memory for stimuli is tested). 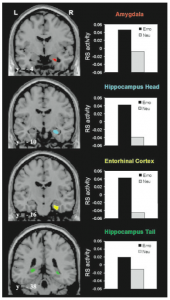 In light of this, Dolcos et al. (2004) measured the neural activity associated with retrieval of emotional and neutral pictures after a retention interval of 1 year. fMRI results showed that emotionally-salient pictures, as compared to neutral pictures, led to increased activation in the amygdala, as well as the hippocampus head, entorhinal cortex, and hippocampus tail (Figure 1). Furthermore, not only do these structures show greater absolute activation in emotional vs. neutral memory retrieval, but they show great coactivation as well (Ritchey et al., 2008) (Dolcos et al., 2004). This is in line with research conducted by St. Jacques et al. (2011) and others into coactivation of the amygdala and neural memory regions in individuals with post-traumatic stress disorder. In PTSD individuals, for example, emotional cues may trigger recollection of traumatic memories, activating hippocampal regions and increasing fear-related activation of the amygdala simultaneously.

One important question that researchers have tried to answer within the realm of emotional memory retrieval is whether observed differences in neural activation are due to the emotionally-toned context the stimuli are presented in rather the inherent emotional nature of the stimuli. In short, how important is context—the circumstances or setting in which the critical stimulus is presented—in retrieval of emotional memories? In one experiment, Maratos & Rugg (2001) analyzed participants’ memory and associated electrophysiological activation (by means of an EEG) of neutral words that had presented in either neutral or negative sentences. These sentences provided the “emotional context” for each word that was presented. The researchers found that retrieval of words in negative sentences, as compared to neutral sentences, was associated with great electrophysiological activation of left parietal and right frontal regions. However, in a subsequent experiment in the same study, the researchers found that when participants were asked to indicate and recall whether each word had been presented in either a negative or neutral sentence (i.e. context), the left parietal and right frontal activation were equal for negative and neutral contexts. This suggests that when contextual retrieval is intentional, people may rely on the same neural pathways for both emotionally-salient and neutral memories. 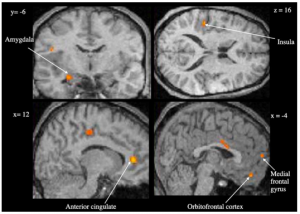 Together, these findings suggest that the amygdala is an important region in multiple, distinct emotional memory processes (both consolidation and retrieval). Other brain regions that show greater activation regardless of the valence of the context in which they are presented include the anterior cingulate, insula, and orbitofrontal cortex (Figure 2). Studies have shown that the insula is activated when viewing both negative and positive pictures, while the anterior cingulate has been shown to play a role in valence-independent aspects of autonomic control and problem solving (Smith et al., 2004), which may explain these findings.

As I have discussed, research shows emotional memory retrieval is associated with relatively greater activation of the amygdala and medial temporal lobe structures like the hippocampus and entorhinal cortex. Additionally, the context in which a stimuli is presented, rather than the solely stimuli—appears to be an important determinant of neural activation. More research into the neural basis of emotional memory retrieval is certainly warranted. In addition, from a clinical perspective, having a more holistic understanding the neural activation associated distinctly with emotional vs. neutral memory retrieval may lead to better treatment options for individuals with PTSD, who suffer psychologically and physically from the consequences of retrieval of certain highly affective memories.