My previous blog posts have depicted the clear picture of schizophrenia as being a complex disease that has many unknown aspects. From its causes, onset, and most effective treatments, there is still much to be researched about schizophrenia. Though it is believed to be genetic with an onset during the 20s, there are exceptions and many unanswered questions in the onset, diagnosis and processes underlying schizophrenia.

In researching the cause and diagnosis of schizophrenia, there is still much left to be understood and discovered. Researchers postulate that the causes and underlying processes involved in the disease have a genetic or environmental basis. Researchers know that brain abnormalities are present in schizophrenia individuals. Whether they are of a neurodegenerative or neurodevelopmental nature isn’t clear. The neurodegenerative view holds that there is progressive deterioration in the brain, which causes/contributes to the onset of schizophrenia — deterioration of gray matter, etc. The neurodevelopmental view holds that schizophrenia stems from early events “intra utero or early childhood/adolescence, that are genetic, environmental, or a combination of the both (Pantelis, 2005).” The neurodevelopmental view has been prominent in how people view the onset and cause of schizophrenia: as being genetic or environmental or both. However, “in some patients, there is evidence of progressive brain changes (neurodegenerative process) (Pantelis, 2005).” 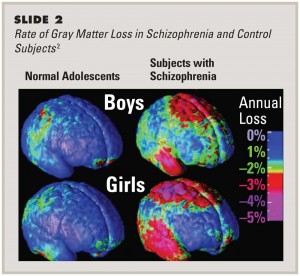 MRI Images of progressive Gray matter loss in the brains of boys and girls.
http://www.cnsspectrums.com/aspx/articledetail.aspx?articleid=1286

Brain imaging studies by Pantelis et al. suggests that there may be “a prenatal or perinatal neurodevelopmental lesion” that makes the brain more susceptible to “anomalous late (particularly post-pubertal) neurodevelopmental processes (Pantelis, 2005).” This is highlighted by an “accelerated loss of gray matter and aberrant connectivity particularly in prefrontal regions (Pantelis, 2005).” In addition to the effects of these neurodevelopmental processes, they also interact with other potential factors that may have a role in the onset of schizophrenia like stress, substance abuse or environmental factors. Each of these factors have progressive stages as shown in the disease’s stages and can be seen as “multiple pathological processes at various neurodevelopmental stages (Buckley, 2005).” The aspects of schizophrenia, behavioral and neuropsychological, can be seen as effects of these multiple pathological processes.

MRI Images of progressive Gray matter loss in the brains of boys and girls.
http://www.cnsspectrums.com/aspx/articledetail.aspx?articleid=1286 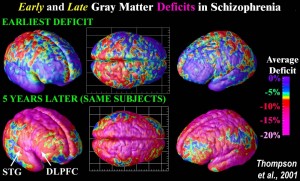 Image of gray matter loss after 5 years in the same subjects.
http://users.loni.usc.edu/~thompson/J/5A.jpg

Schizophrenia has many intricacies that are not easily explained by brain imaging studies, psychopharmacological drugs or psychotherapies. It is not definitively described as being neurodevelopmental or neurodegenerative and much is still left to be understood about most effective treatments and therapies. There is clearly much left to be discovered about this disease. Despite these discrepancies, there is agreement on the importance of studying this disease and providing treatment for individuals who have been diagnosed with schizophrenia.