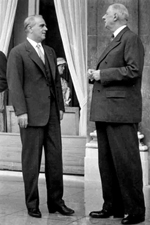 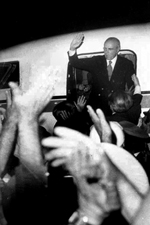 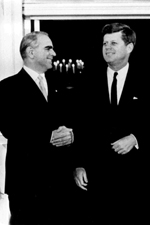 Constantine Karamanlis (1907-1998) was a remarkable leader and patriot whose vision changed the history of Greece, guiding his homeland through times of political unrest toward an era of greater stability and prosperity. After earning a law degree, Karamanlis—at the age of 28—embarked on a career in politics that would span six decades. He was elected as a Member of Parliament 12 times, and he governed the country as its prime minister for 14 years (1955-63, 1974-80) and as its president for 10 years (1980-85, 1990-95). He earned renown as one of the most prominent political figures of contemporary Europe by reintroducing democracy in Greece after the fall of the military regime in 1974 and restoring civil liberties. Having restored democracy in Greece, Karamanlis pursued a consistent strategy of making the country a full participant in the evolving project of European integration. Under his leadership, war-torn Greece left its poverty and isolation behind and became a thriving member of the European Union.

Karamanlis’ nephew, Konstantinos (Kostas) A. Karamanlis (F82, F84)–the leader of Greece’s New Democracy party since 1997- was elected Prime Minister of Greece in March 2004. Having earned both a Master’s degree and a Ph.D. at The Fletcher School, he has voiced strong support for the Constantine Karamanlis Chair: “Our purpose is to help the American academic community realize the complexities of our region and the deep historical and cultural influences in the Balkans. We want Southeastern Europe to become a paradigm of integration—and not a showcase of conflict and ethnic misunderstanding.”

The Constantine Karamanlis Chair at the Fletcher School is unique in that its funding comes from a large number of individuals and institutions in Greece and the United States. Its supporters include parents, alumni, and friends of Tufts University in both countries, as well as scholars and leaders who believe in continuing the work begun by Constantine Karamanlis.