Greece and the Euro: From Crisis to Recovery
George Alogoskoufis and Kevin Featherstone, eds. July 2021. 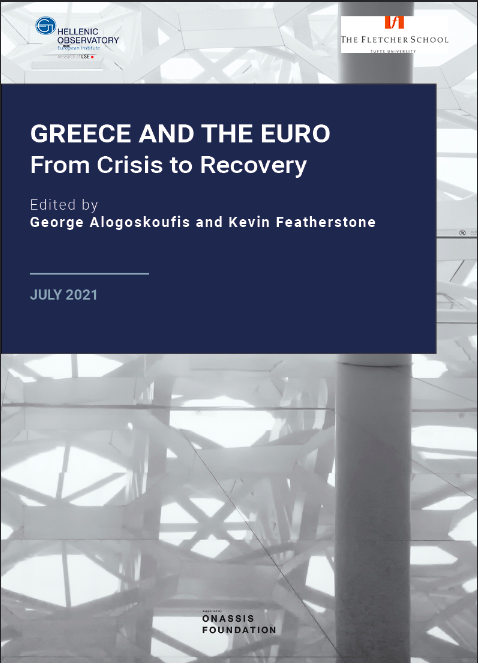 “The eight-year adjustment program followed by Greece in the aftermath of the 2010 crisis was concluded in the summer of 2018, albeit with ongoing policy constraints. The program was associated with the deepest and longest recession in Greece’s post war history. While the Greek economy appeared to be on a path to an admittedly weak recovery after 2017, in 2020 it was hit by another major negative shock, that of Covid-19 which has caused another deep recession.
Many of the issues that confronted Greece before the Covid-19 crisis remain relevant for the sustained recovery of the Greek economy after the end of this latest crisis.

The pre-conditions – economic, political and institutional – for a sustained recovery of the Greek economy were examined recently by a number of prominent academics, many of whom possess extensive political experience in Greece. A selection of their contributions, first presented in a workshop at the London School of Economics, in December 2018, and a conference at the Fletcher School of Tufts University in April, is collected in this book.

With ramifications for both Greece and the Euro-Area as a whole, the contributions consider the constraints that derive from the structural linkages between the domestic and the European levels. While concerned with the core economic agenda, they place it within its political, social, and institutional contexts in order to have a more complete assessment. They ask what scope there is for recovery, the priorities that need to be set, and the prospects for their attainment.”