Our team seeks to make the Glossary of Greek Birds more accessible to a broad audience while also making the data available for analysis. As part of this effort, we have been enhancing the Glossary with layers of analysis that will provide entry points into the data it presents.

One such entry point we envision employs Formal Concept Analysis (FCA) to explore the physical as well as mythical characteristics of the birds listed by Thompson and how those relate to the myths Thompson cites as evidence.

Broadly, FCA is a set of tools and techniques that can help with qualitative data analysis. An analysis begins with a formal context, which consists of a list of items or objects, a list of attributes or characteristics those items may have, and a tabulation of which attributes each item actually has. We chose FCA because, as we will see below, it operates nicely on the sort of qualitative, item vs. attribute data matrix derivable from a text like Thompson’s.

In order to assess whether FCA methods are likely to help make the material in Thompson’s Glossary more accessible in actuality, we ran a series of experiments on a test entry, the aithyia. We built a formal context based on the texts cited by Thompson and the characteristics of the aithyia mentioned in each text. Specifically, we constructed a formal context by systematically listing the storylines in which aithyia appear in source texts cited by Thompson (items) as well as their characteristics (attributes), both physical and mythical. You can see that formal context here. While we built this initial test context by hand, we plan to explore semi-automatically deriving formal contexts from our XML markup once that has matured sufficiently.

Once our context was built, we examined two outputs of formal concept analysis, (attribute) implications and (item) closures, which we go into in the following sections. We look at these with an eye towards whether they might be understandable to someone who does not have deep expertise in myths or birds.

Our formal context for the aithyia consists of 35 items and 22 attributes. Recall again that items for us are storylines in myths that mention the aithyia. Attributes are mythical features of the storyline such as that it involves the goddess Athena as well as physical attributes such as that a fight occurs in the storyline or that someone mourns the dead. The implication basis for this context consists of 57 statements. Many involve large sets of attributes and are difficult to interpret. However, many involve only a few attributes. Here are a few, written as logical implications; the parenthetical list following each implication is the set of myths supporting the implication.

One consequence of the last implication is that if a myth involves female and metamorphosis, then it also involves dive into the sea. Statements like these are derived automatically from the formal context, but nevertheless make contact with myths and can be assessed like any logical claim. And in fact, this finding is verified in Greek myths, where female figures such as Ino, Hyperippe, Alcyone, and Asteria dive into the sea and are metamorphosed into birds. The only male figure to undergo such a transformation after a dive into the sea is Aesacus, but this story seems to be a Roman reinterpretation of earlier Greek myths (see M.-C. Beaulieu, The Sea in the Greek Imagination, chapter 5).

Thus far FCA appears to be a promising technique to bring the complicated material in Thompson’s Glossary to a wider audience, first by surfacing some of the logical content in glossary entries (the implication basis), and second by exposing otherwise implicit similarities among myth storylines (item closures). We are currently exploring visualizations of this information–the so-called concept lattice— 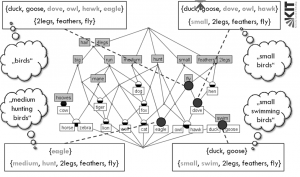 and how these might help drive a user interface that helps readers explore the glossary’s contents from these different perspectives.