What’s it like to launch a social venture in a low-income country and have real world impact?

Fourteen-year-old Senait lives in a one-room house in Gondar with her mother, father and seven siblings. Currently in the eighth grade, she dreams of one day becoming a doctor to help others throughout Ethiopia, and is ready to accept and challenge any difficulties that stand in her way. 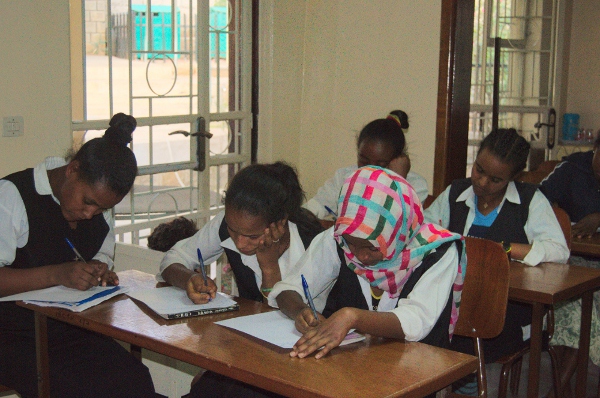 Throughout Ethiopia, young girls like Senait struggle in a system where failure far outpaces success. Poverty rates are sky high, while access to education is among the worst in the world. Just 18 percent of women over 15 are literate and less than five percent graduate secondary school. Out of 127 countries in UNESCO’s “Education for All” Index, Ethiopia ranks 126th.

As stark a picture as the numbers paint, solutions to pull girls out of poverty do exist; the problem is finding a way to bring them to those who need it most. Fletcher alumna Viola Csordas (F09) saw the problems and the solutions, but needed a push to help bring them together.

That’s where the Fletcher D-Prize came in. An email to Fletcher alumni announcing the poverty solutions venture competition—which is about to embark on its third year—was just the nudge Csordas and her friend Maria Zandt needed to start SponsorHer!, a social fundraising platform. The duo embarked on the journey with the goal of changing the future of girls in Ethiopia by matching sponsors to girls in need of funding for high school education.

“You talk to all these people who don’t know how to help, and you don’t really know where to start,” Csordas said. “We were pushed by the Fletcher D-Prize process to think about what we really wanted to do and accomplish.”

Despite never having written a business plan before, Csordas and Zandt had a strong idea and passion for improving the lives of girls in Ethiopia that captured the attention of The Fletcher D-Prize. By enabling a growing network of expatriates, tourists and volunteers to make a positive impact in the country, the SponsorHer! platform looks to support the girls in receiving a high school education through a scholarship program and interactive social fundraising website.

Just $20 US a month can keep an Ethiopian girl in public high school, paving a path to future gains in income of up to 25% for every extra year of secondary education completed. The real challenge was finding a mechanism for matching sponsors with students in a scalable way. Combining local knowledge and support from their networks, as well as both of their backgrounds in development, Csordas and Zandt finally had what they needed to formulate a plan.

After hearing and heeding the call to action one year ago and with months of hard work stepping into the unknown – “I’m starting to really wish I had taken management for non-profits while I was at Fletcher!” Csoards said – SponsorHer! is now on the ground officially, funded by a $5,000 award from the Fletcher D-Prize.

At its launch event in Addis Ababa on May 17, SponsorHer! landed the first of what the duo believes will be many sponsors for promising girls in Ethiopia, taking the first step on the way to their goal of securing sponsorship for 5,000 girls in the first two years and helping to pave a pathway out of poverty.