Youth Climate Protests Around the World 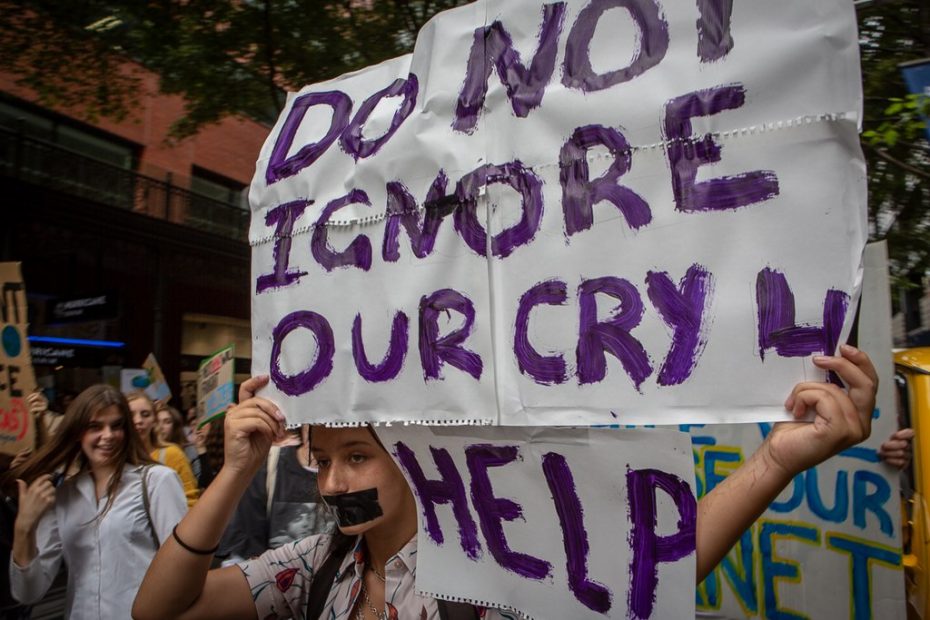 Sometimes, the need is to act in a single-minded, straightforward way, a way designed to meet a crisis head-on and without delay, a way that says “Stop talking about ‘ought’ and start acting on ‘must’ “. But to do so means setting aside characteristic adult ways of being cautious and going slow. And so, when a crisis arrives and the time to act is now, youth may have to lead the way.  That seems to be the case lately with regard to climate change.  In just this past year, between one and two million teens on every continent except Antarctica have been protesting for action on climate change – and the protests are destined to continue and grow.

It all started on August 20, 2018 when a 15-year-old Swedish girl, Greta Thunberg, skipped school and camped out in front of the Swedish Parliament to protest inaction on climate change – at first every day for a month and then on Fridays for several months.  Thunberg has been diagnosed with Asperger’s – a condition she claims has helped her to see the folly of delaying action on climate change.  But it is her old soul way of talking truth to power that has inspired millions and led to her being nominated for a Nobel Prize.  In typical Thunberg style, she tells the world calmly, “Adults keep saying, ‘We owe it to the young people to give them hope.’ But I don’t want your hope…. I want you to act as you would in a crisis. I want you to act as if the house is on fire. Because it is.”

Following Greta Thunberg’s lead, teens from London, Minneapolis, Santiago, Nairobi, Hong Kong, and over 2000 other cities spread across the world have been organizing themselves in ways that would have been unimaginable in previous generations.  Harnessing the power of social media and technology, they have created websites, established organizations, and led movements of climate protests.   Many have followed Thunberg’s example by calling themselves #FridaysForFuture – and already there have been three Friday school walk-outs (the most recent being September 20th, 2019) by over a million and a half students, mostly teens in high schools, from over 125 countries.

For the protesters, the message is clear.  In the words of Alexandria Villasenor, a 13-year-old who left school on Fridays to camp out in mid-winter and protest in front of the United Nations headquarters in New York City, “My generation knows that climate change will be the biggest problem we’ll have to face.”  And students who started the U.K. Climate Network add, “Greta Thunberg may have been the spark, but we’re the wildfire, and we are fueled by the necessity for action.” Maya Sprenger-Otto, a junior in Washburn High School in Minnesota put it more bluntly, “We need to cause an uproar!”  The striking students collectively tell us the following – that going to school is pointless if, in the future, there will be no future that the students want to live in.

This movement is being led mostly by girls – a fact rarely discussed in newspaper reports.  “Where are the boys?”, one might ask.  Is there something about being a girl that makes concern for the quality of life for future generations more likely to be a top priority? Or is it more a matter of girls finding greater satisfaction in working with peers in groups deemphasizing competition and the need for individual recognition? Definitive answers await future research.

These youth groups protesting for climate action are diverse with respect to nationality and ethnicity – and their diversity figures into their showing how climate change is a social justice issue — because climate change has the greatest effects on those who are least guilty of contributing to climate change – and because the greatest effects are on the poor.  And so, these teen movements are doing more than pushing for changes to fight climate change; they are also pushing back against far-right politics that favor national and special interests over global interests.  In short, the youth protest movements are pushing to unite us all and foster in us a new identity as citizens of the world.

Increasingly, the youth movements calling for action on climate change are becoming political, and already the effects of their efforts are showing.  For example, in the U.S., the “Green New Deal” policy proposal now being discussed in Congress has its roots in the teen-led Sunrise Movement’s efforts to get politicians elected — those who support action on climate change. Not surprising, this politicizing of the movement has drawn out the haters, and so now there are personal attacks being directed toward the youth, everything from calling them truants, not protesters, to puppets of adults, and, in the case of Greta Thunberg, to “deeply disturbed”. In typical Thunberg fashion, in response to the comment about her being deeply disturbed, she replied,”I am indeed “deeply disturbed” about the fact that these hate and conspiracy campaigns are allowed to go on …. Where are the adults?”

#FridaysForFuture, UK Climate Network, Sunrise, and other teen-led movements may yet provide the tipping point needed to change the conversation about climate change — from talk about what we ought to do to talk about what we must do  — and if that change in talk doesn’t lead to action, you can bet we’ll be hearing from the youth.

Now here’s more of Greta Thunberg showing us the way: