It’s 6:05 PM on Wednesday, August 1, 2007. The evening rush hour is well underway in Minneapolis, Minnesota, and a stream of drivers is moving across the I-35 W Highway Bridge on their way home to their families. Suddenly, with no warning, over 1000 feet of this nearly 2000-foot bridge gives way. A catastrophic failure in the main span of the deck truss sends the bridge crashing into the 15-foot deep river 100 feet below the roadway. In mere moments, over a dozen people have died, and over a hundred are injured (Collapse, 2007, p. 1). The government had designated this bridge as “structurally deficient” since 1990, and yet no major overhaul had been done (Cohen, 2007, p. 1). Perhaps most shocking of all is that at the time of this bridge collapse, there were an additional 77,000 bridges in the United States with the exact same designation.

Every four years, the American Society for Civil Engineers provides a fully comprehensive assessment of the infrastructure in the United States, awarding a grade using the typical A-F grading scheme. It may come as a shock to find out that the United States has consistently scored in the D’s since 1998. The most recent report card, from 2013, gave the United States a slight improvement to a D+ (2013 Report Card., 2013). Still, we are on a road to F’s if we do not make a change.

Our Failing Bridges and Roads

As of 2013, the grades for Bridges and Roadways in the U.S. were a C+ and a D, respectively. Currently, 11% of all bridges in the U.S. are rated as structurally deficient, and the average age is 42 years (American Society of Civil Engineers, 2013). If the United States wants to eliminate our current bridge deficiencies within 15 years, the Federal Highway Administration has estimated that we need to spend an additional $8 billion annually on top of the current $12.8 billion being spent. Roads in the U.S. scored much lower than bridges, due to lackluster structural conditions, and massive urban highway congestion. The ASCE estimates that this results in $101 billion of wasted time and fuel each year. These issues only begin to scratch the surface of the problems with infrastructure in the U.S. Luckily, advancements in the field where Electrical and Civil Engineering intersect may allow for some much needed improvements.

Problems and Fixes for Bridges

Bridges are an incredibly widespread part of this nation’s infrastructure. However, of the 607,380 bridges in the United States, 11% are structurally deficient. Each year, our bridges get older and more become deficient. Obviously, there simply aren’t enough people to manually perform thorough inspections on each bridge. In the past, concerns with bridges were mitigated by visual inspections, conservative design, and statistical analysis. The fact that so many bridges have slipped through the cracks of this system should come as no surprise. With modern instrumentation, many common problems that occur in bridges can be found via automated processes that are always monitoring, giving us the ability to stop potential tragedies before they occur. We now have the smart Bridge.

What is a Smart Bridge?

A “smart” bridge is, in contrast to a regular “dumb” bridge, a bridge that has various sensors on it, allowing an electrical or civil engineer to gather large quantities of data about the bridge for analysis. With different types of sensors, engineers can learn about anything from various stresses and strains the bridge is enduring, to how many cars a day are crossing the bridge.

How Does a Smart Bridge Work?

There are many different metrics to determine the health of a bridge. One of the most important metrics is the strain that the bridge is experiencing. A new method by which smart bridges can monitor strain is by use of fiber optics in what are called extrinsic Fabry-Perot interferometers (EFPI) (Watkins, 2003, p. 27). A fiber optic cable carries light, the same way that a power cord carries electricity. The basic idea works thusly. A fiber optic cable may be bonded to a material under strain. Then, light is transmitted between the two ends of the fiber optic cable. As the material strains, the fiber optic cable bends with the material, and the light bouncing in the cable starts to experience different interference patterns. These changing interference patterns can be demodulated and used to calculate the strain being experienced by the material the cable was bonded to. This strain can be continually monitored, making it obviously a much more robust solution.

So how does this really work? To create an EFPI, optical fiber is put inside of a capillary tube, with a small gap between two sections of fiber. This creates a small reflecting chamber, as can be seen in Figure 1.

Then, one side of this fiber is sealed off, and the other side is connected to a light source, and in addition a wavelength demodulator hooked up to a photodetector sensor. The light source, which can be a laser, or an LED, sends light down the fiber optic cable, where it reflects in the gap. This reflection then comes back down to the demodulator and photodetector, as can be seen in Figure 2. 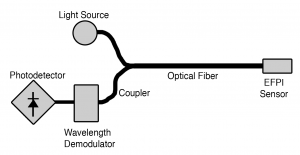 The interference values are then calculated to determine how large the reflecting gap must be compared to a “resting” value. Because the gap changes due to strain, a correlation is used to determine what strain the sensor is currently experiencing (Watkins, 2003, p. 27).

The most important factor for a sensor is that it must not adversely affect the structure it is monitoring (Watkins, 2003, p. 28). Obviously, no one would use a sensor that decreased the safety of a bridge. Further, the cost to implement the sensor system must be less than the cost was to perform inspections the old way. Finally, the sensors must be able to integrate with the structure that they are monitoring without the structure adversely affecting the sensor (for instance, you would never put a non water-proof sensor underwater).

Luckily, fiber optic sensors have a lot of fantastic qualities to mitigate these potential issues. For instance, fiber optic cables are immune to electrical noise (Watkins, 2003, p. 27). Further, they have fantastic environmental ruggedness, and are not easily corroded, or affected by temperature fluctuations or strong vibrations, making them ideal candidates for utilization in civil engineering.

Anyone who has ever driving in a major American city knows that we have a major traffic problem. Alleviating this issue is not going to be easy, but it starts with actually knowing just how much traffic we have. To determine how many cars are traveling over any given road, sensors embedded in the pavement monitor the passage of cars. Traditionally, these have been piezoelectric sensors, but they fail too often due to corrosion, power surges, or just signals from adjacent traffic lanes (Cosentino, 2003, p. 549). Thus, a new solution for better smart roads is necessary.

Again, fiber optics comes to the rescue. A new Fiber Optic Traffic Sensor (FOTS) is based off of a similar principle to the solution for bridges. The FOTS is flexible sensor with input and output leads for transmitting light of a known intensity. As the leads flex under strain, the intensity of light transmitted decreases. An associated computer system can take the change in intensity of light to directly correlate what strain was being experienced (Cosentino, 2003, p. 550). When placed beneath a road surface, cars driving over the sensor deform the fiber optic cable of the FOTS, and allow less light to get through. Thus, cars are easily counted automatically, and with better longevity than previous sensors. Furthermore, the relation between transmitted light intensity and weight on the cable is known. This allows engineers to weigh the cars that are driving on the roads as well, which is another important attribute for maintaining the roads.

These technologies are only a few out of countless technologies needed for this country to fix our infrastructure, and maintain it into the future. While fiber optic sensors are a promising tool for roads and bridges, different solutions are needed for all of the various problems running rampant throughout this country. Thankfully, advancements in electrical and computer engineering may be able to bring the