In large concert settings, pianos cannot be heard over other instruments and the crowd just as they are. Miking the piano is notoriously difficult and often doesn’t get the sound quality desired by the musician. While one option is to use an electronic keyboard which outputs digital sound, many musicians prefer the feel of a real grand piano. Our project was to design a prototype device that would attach to an acoustic piano and transcribe the music played on it to a digital MIDI stream. This MIDI stream can serve many purposes, one of which would be to play samples over loudspeakers, thereby making a piano performance audible in a large setting.

There have been other devices of this nature before such as the PNOScan, but these devices had flaws with latency and were not as accurate as musicians wanted. We decided to continue the work of previous senior design teams which was to continue making improvements to the PNOScan system. Our team wanted to focus on the musicality of the device and replace the laser sensors under the keys with magnetic pick-ups on the strings, similar to those on an electric guitar. Our device attaches to the metal support beams underneath the piano and measures movement of the piano strings. It uses this information to generate a MIDI stream, an industry standard. 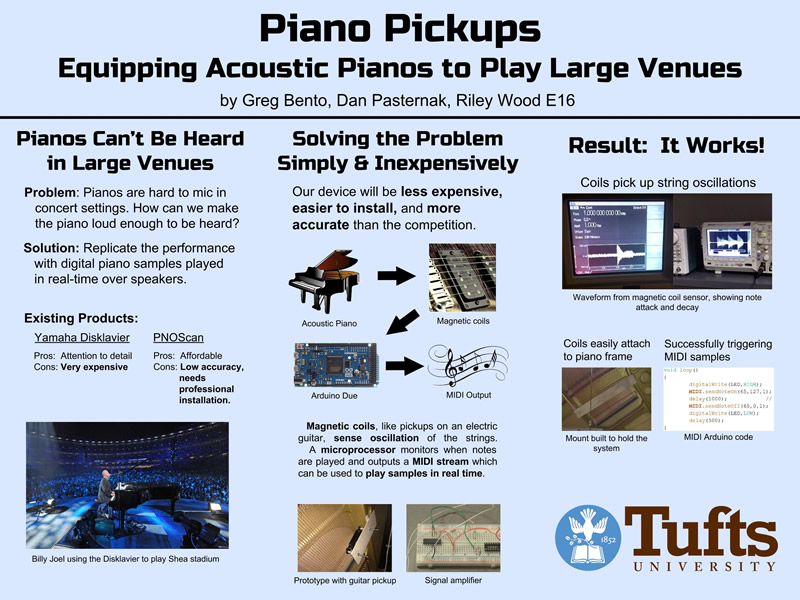