With the increasing popularity of Unmanned Aerial Vehicles (UAVs) in the civilian sector, there has been a rising concern regarding their use for illegal activities. Many instances of drone misuse have been reported. These range from close calls with passenger airliners to drug deliveries into prison yards. Governments’ attempts to develop countermeasures have yielded net-launching bazookas, trained eagles, and RF jammers. None of these provide adequate control over the target drone; they could cause drones laden with explosives, drugs, or other dangerous materials to land in populated areas.

The goal of this project was to develop a more sophisticated countermeasure that would give more control over the target drone than the current countermeasures are able to provide. Many commercially available drones rely heavily on GPS for navigation. By sending them false GPS signals (a process called GPS spoofing), it is possible to trick the drones into flying to a location of the defender’s choosing. This could be used to redirect explosive-laden drones to safe areas rather than causing them to land on top of whatever they might be flying over at the time.

Due to the illegality of broadcasting GPS signals, the project was focused on the design of a GPS spoofing system rather than the implementation of one. By researching the navigation modes of drones, assessing the response of a GPS receiver to spoofing at various power levels, and simulating potential antenna types, the functionality of the system was parameterized. 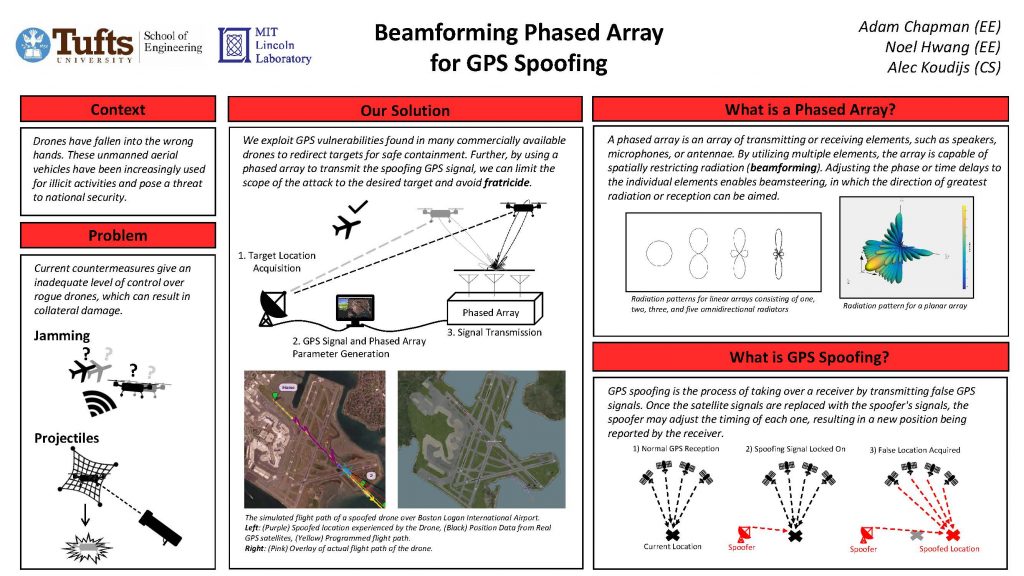