Landing on an asteroid is hazardous for a rover due to the possibility of collision with a large boulder or sharp rock. A hazard detection system is needed to detect inadequate landing locations on the asteroid and protect the rover. The purpose of this project is to create a robust hazard detection system with the goal of eliminating unsafe landing sites through modeling. There is immense value in a system that finds suitable landing sites –the knowledge gained from this project can be applied to space landing programs. This technology will help expand humanity’s ability to explore and study foreign bodies in outer space. A successful landing on an asteroid would provide the opportunity to collect samples of rocks. The study of these samples would reveal information about how the asteroids formed, expanding human understanding of how the universe itself also formed. To determine success for this project, a simulation of an asteroid surface, a rocky and jagged landing surface, is built and tests are performed in a poorly lit room. Clearly, we cannot test our detection and safety landing algorithm in the real world (read: space) so the goal is to set up a test that challenges the rover in the ways that a rover landing on an asteroid in real life would. Our customer, Draper’s navigation and sensor fusion department, with stakeholders including those working on rover landing systems or space exploration programs. This project has the potential to be applied to landing systems on earth –for drones, helicopters, etc. 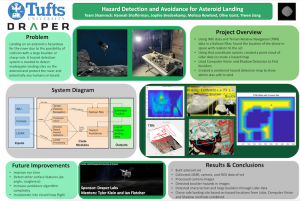