Welcome back! The past blog posts have focused on the general role of our senses and our emotions, and the specific role of our visual system in emotion. This post’s focus will be on the auditory system. Let’s start with an exercise. 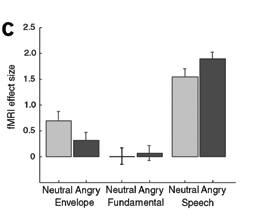 The differences in STS activation when listening to emotional words versus neutral words or sounds of similar frequency or amplitude. (Grandjean et al., 2005)

One of the main ways which we interact with other people is through speech. When we speak, we often times display emotions in our words or voices. Someone’s words may become clipped and loud in anger, or  may seem to wobble when they’re sad. A study by Grandjean et al. (2005) examined how these vocal differences affect the brain. Participants listened to angry and neutral words or just neutral words. They also listened to sounds of similar frequencies or amplitudes as controls. Participants who listened to the angry words had an increased activation in their right superior temporal sulcus (STS) of the auditory cortex. A study by Ethofer et al. (2006) supplemented these findings. Participants listened to words spoken in either angry, neutral, or happy tones. They rated the intensity of each word while in an fMRI.  They too found increased activation for angry words in both sides of the STS, but stronger activation on the right. Interestingly, this activation was found even though participants were just rating intensity. These findings tell us that the auditory cortex is very involved in identifying voices as bearing some emotion. This identifying of emotion may take place in conjunction with just hearing and deciphering the words. It also may be done regardless of what else is being focused on (Ethofer et al., 2006). This makes sense, it is a good thing to understand the emotions of a person you are communicating with. Sometimes, the person may not directly tell you. Other times, it may be useful to help empathize with them. Brain activation in terms of emotions can change based upon the emotion in question.

Which face would you most want to help? You’d probably want to help the sad face more. Our auditory cortex aids this by being more in tune to sad tones of voice (Buchanan et al., 2000)

Buchanan et. al (2000) found that increased STS activity varies based upon emotions. Participants listened to words that were said angrily, happily, neutrally, or sadly while in an fMRI scanner. They pressed a button when they heard a target word was heard or a word was spoken in a target emotion. Participants were more successful in emotional identification. In addition, greater right anterior auditory cortex activation was seen in the emotional tasks. This may indicate that our auditory systems process emotions before content (the actual word). Further, the right anterior middle frontal gyrus had more activation for sad words. This shows that sad intonations may alert us more than happy ones. This may be due to the fact that when someone is sad, we may be more in tune to them. Think about it. You are more likely to help and want to alter a sad person’s state (back to at least neutral) than change a happy person’s mood. How does this change for those who have impaired hearing? Research shows that emotional processing changes dramatically for the deaf.

Ludlow et al. (2010) aimed to see how emotional processing is impacted for deaf children. Deaf children and normal hearing children participated in their study. Participants viewed faces and categorized the emotions displayed. Faces were either human, a human like cartoon, or a cartoon. These faces were oriented upright or upside down. Both groups were equal on the two cartoon faces, and both groups performed worse on the upside down faces. Deaf participants, however, made more errors overall and had significantly worse performance. A study by Dyck et al. (2004) compared the emotional recognition abilities of hearing impaired and normal hearing children. He used four tests including: “Fluid Emotions Test” which looks at one’s accuracy in classifying changing emotions and “Emotion Vocabulary Test” which looks at ability to define and describe emotional words. In all five tests, hearing impaired children performed worse. This implies that substantial emotional learning comes from what we hear. It allows us not only to process the emotions in someone’s voice, but also how we utilize and apply knowledge to emotions.

It just makes sense that our sense of hearing (pun intended) underlies so much of our learning in emotion. Hearing is one of the first senses we really grasp. Babies are said to be in tune to the voices from early on.  Hearing allows us to take in information about the world before anything else. You sometimes hear aspects of a situation before you arrive at the scene. As seen in this post, our auditory cortex increases in response to emotional tones. Those who are deaf have severely impacted emotional understanding. Being able to understand emotions from hearing, is especially important now where conversations may take place without any direct contact such as via phone. Next post, we will look at how our gustatory and olfactory systems can play into our emotion. Stay tuned!

Ludlow, A., Heaton, P., Rosset, D., Hills, P., & Deruelle, C. (2010). Emotion recognition in children with profound and severe deafness: Do they have a deficit in perceptual processing?. Journal of clinical and experimental neuropsychology, 32(9), 923-928.