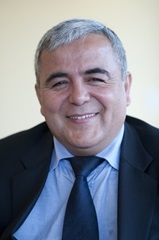 Mr. Davlatov has over 15 years of experience in the banking system of the Republic of Tajikistan. He holds a PhD in Economics (1992) from the Russian State Financial Academy and a degree in Accounting from the Tajik State University (1985). He is the author of more than 20 scientific publications. From 1985 to 1995 he was assistant professor in the Economic Analysis Department of the Tajik State University (Dushanbe); from 1995 to 2001 Head of the Banking Analysis Department, Deputy Head of Department, Head of the Banking Supervision Department, and Deputy Head of the National Bank of Tajikistan. In 2001 he became Chairman of the Board of the State Savings Bank of the Republic of Tajikistan “Amonatbank.” Four years later, Mr. Davlatov became Head of the Department on the Cotton Debt Resolution Strategy of the National Bank of Tajikistan.

The program is funded by the Bill & Melinda Gates Foundation.