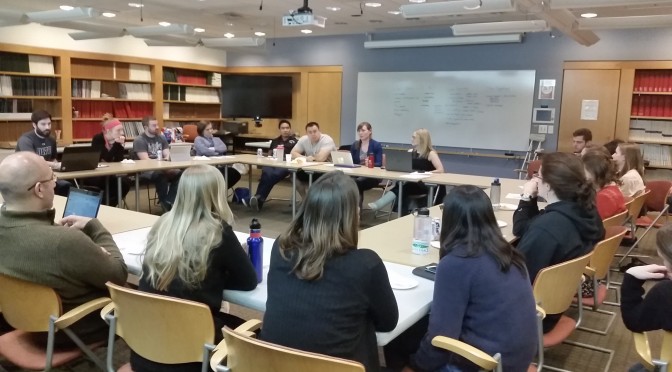 On March 3, 2016, the Sackler Graduate Student Council (GSC) held an advertised open meeting and invited the Sackler student body to attend. While all GSC meetings are open, according to the bylaws, and club/organization leaders attend the first meeting of academic year, this was the first time in 3 years that the GSC meeting was publicly advertised. When asked about the motive behind this action, Michaela Tolman, current GSC President, stated “we serve the students, so we wanted to offer a way in which they could express their opinions while also giving them a flavor of what GSC does and how it is run.” While the turnout was modest, she did mention that it was more than what she had expected.

Traditionally, GSC meetings  mostly comprise of financial updates from the treasurer, different committees (career paths, social, newsletter, etc.) reporting on their previous events and discussing their future plans and setting up action items to be completed before the following meeting. This meeting  followed the same pattern and after the committee updates, the floor was opened up to the non-GSC attendees.

Most of the non-GSC attendees shared that they were curious about the inner workings of the GSC and had either been invited to the meeting by a GSC member to the meeting or attended on their own initiative; some of them were also interested in joining the council the next academic year. Almost all class years and programs were represented in the attendee group.

Given that a major focus of the GSC is to organize and hold events focusing on career building and networking, it was no surprise that most of the suggestions from attendees were focused on that topic. Suggestions were made for events to improve social media networking, seminars on data management and presentation skills and early stage career development, and most emphasis was placed on the interactive nature of the events and their diverse nature. Other suggestions included a consolidation of seminar schedule, especially student talks, across programs and departments, including the hospital seminars.

GSC’s commitment on serving students manifests itself in it’s quick response to the students’ feedback at the meeting. CMP rep Dan Wong, has already put together a google calendar program that allows consolidation of all seminars that are listed on the Sackler calendar and can be easily integrated with an individual’s calendar (here is how to do it).  When asked about the outcome of the meeting, Tolman mentioned “I had no idea what people would bring up – which shows that we always need to seek student input. Some things were helpful for directing our current efforts – career paths heard positive things about diversifying the type of events that they hold while also focusing more on skills. The coordination between programs was discussed, and I am really excited to put into action the student suggestions.” She also hoped that some of the attendees would join the GSC in the future, and that most, if not all, attendees would see GSC as “a fun and an exciting opportunity to take part in”.

Overall, the open meeting seemed to have served its purpose in getting student feedback. The necessity of such a meeting, at least once a year, was echoed by both the GSC President and the attendees; Tolman believes that a town hall style meeting will be more effective in increasing student engagement and getting more input from students as “it would help better direct what we do and better serve the students’ needs”. Attendees who were contacted as a followup of the GSC meeting agreed that this year the GSC has become more interactive and applauded the various efforts GSC has undertaken to integrate students better and become more interactive, such as through The Goods email format, the Instagram account and voting on the location for Relays.

The bylaws of the Sackler GSC clearly show that this organization is for the students and by the students, and therefore, there should be no doubt that increasing student engagement in not only its events, but also its governance should be made a priority. In the past, there have been GSC events where student attendance and engagement have fallen short of expectation, whether it be due to lack of advertising or a distancing of the GSC from the student body it represents. This publicly advertised open meeting is, in my opinion, a definite right step towards the actual fulfillment of this organization’s mission.