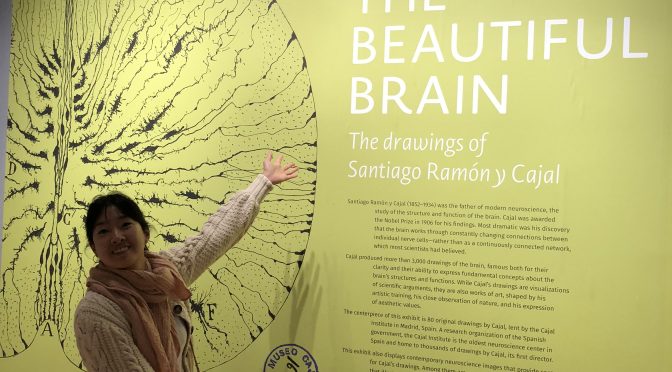 JH: Thank you so much for taking the time to answer some questions! How did you get your start in science?

NC: My start in science harkens back to my high school on the island of Guam, when I volunteered to work at its endangered species lab under the direction of our AP Bio teacher Dr. Hauhouot Diambra-Odi. For decades, invasive species have completely destroyed Guam’s ecosystems. Of particular interest to our group was the introduced Philippine collard dove, which is threatened by the invasive Brown tree snakes. In the lab we designed experiments to learn more about existing bird migration patterns and behaviors. We delved into “field work,” which involved several camping trips on an uninhabited islet called Alupat island (approximately 200 meters off the western coast of Guam). We eventually presented the data at the International Student Science Fair in Kyoto, Japan. Unfortunately, some of Guam’s endemic bird populations, such as the Guam rail are deemed extinct in the wild and extirpated from the island. I was surprised to find that the New England Aquarium had these birds, a little piece of home right in Boston!

JH: What drew you to neuroscience?

NC: I worked as a tech in several different labs and research areas, including cancer biology, immunology, and translational neuroscience. I worked in Clive Svendsen’s lab at Cedars-Sinai in Los Angeles, where I became involved in stem-cell transplantation studies in animal models of neurodegeneration, specifically the SOD1G93A rat model of ALS. I was fascinated that a neurodegenerative disease phenotype was able to be recapitulated in rodents harboring a mutated human ALS gene. Through these studies, I joined Gretchen Thomsen’s lab, whose particular focus was studying the link between repetitive TBI and ALS. My previous experience in immunology research motivated my investigation of selective inflammatory responses related to TBI-induced neurodegeneration. I fully credit working in the Thomsen lab as where I discovered my passion for neuroscience research.

JH: What is your favorite technique that you use in lab?

NC: I’ve become an apprentice of electrophysiology since I joined the Moss laboratory here at Tufts. Tarek Deeb has been profound in imparting his knowledge of ephys and its many applications for neuroscience research. It’s intriguing to use the patch-clamp technique to measure the electrical properties and functional activity of neurons. My research experience has been primarily focused on looking at biochemical changes in neurological disease, so it has been refreshing to learn a new technique and observe electrophysiological changes in the brain. I remember that first moment, not too long ago actually, when I patched onto hippocampal neurons in mouse slices and observing action potential firing patterns. Seeing those spikes is so satisfying!

JH: Have you been following any fascinating new scientific developments or controversies?

NC: More recently, I’m trying to stay updated on new ephys systems in vivo and ex vivo. There are so many cool videos and photos that pop up on my feed of some of the most insane multipatch ephys rigs. Ed Boyden’s group has made tremendous advances in automated in vivo multipatch recordings. Automated multipatch rigs not only allow for ease of recording multiple neurons simultaneously, but also provide large-scale mapping of brain circuits. Multipatch clamp recordings also reveal more about connectivity between specific cell types in the brain, and automation provides a huge advantage in terms of time and feasibility. It’s always exciting to see the latest innovations that come out from the Boyden lab, but also it seems that robots are an inevitable part of scientific developments.

JH: What do you do outside of lab?

NC: Because I’m a Boston transplant from Los Angeles, it was important to me to foster an environment at school that would feel like home. Thankfully, student organizations such as GWiSE and SPINES provided just that. Currently, I am the GWiSE secretary and operate media and communications for our group. As a first-year, I enjoyed the GWiSE coffee & conversations events that feature a woman in STEM and learning of their school and career experiences. I am so thankful for my former PI, mentor and friend, Gretchen Thomsen, who believed in me and is one of the reasons why I am in grad school today. I definitely benefit from the efforts of GWiSE and SPINES that provide programming surrounding diversity and inclusion, because ultimately representation can have a broader impact. You can follow GWiSE and SPINES on Twitter (@TuftsGwise and @TuftsSPINES)!