Accuracy vs. Authenticity in Slave Quarters — Reflections and A Call To Action

On Friday, October 10, I had the unusual privilege of spending the night in the slave quarters of the Royall House and Slave Quarters in Medford, MA as a part of The Slave Dwelling Project, organized by Joseph McGill. This project is intended in part to raise awareness about slave quarters that still exist, and it got me thinking about what it means to have a former slave quarters as part of a historic house museum, what works, and what doesn’t. It’s a difficult subject to write about, because the past is full of powerful emotions and the future is full of hard work, but I do have some thoughts I want to share.

There is very little information about the slave quarters on the Royall estate. There is no surviving inventory and few or no description, so much of what is known has been determined through an extensive archaeology project and the evidence in the physical structure of the building. However, the building had been modernized by previous owners, which is probably the reason it is still standing, but also meant a loss of information and historical accuracy. The first floor was probably once three rooms and a kitchen, used by enslaved workers for their daily duties but not for sleeping. Now, it’s all one room except for the kitchen, and it’s used by the Royall House Association for talks, events, and other large gatherings of people. Often these events help visitors go deeper with the history of the site.The second floor of the slave quarters is a private residence. The first time I visited the museum, my friend who I had gone with told me afterwards that she was very disappointed, because she expected the slave quarters to be the big finish of the tour. On this visit, I learned that the space is used as the residence for a caretaker of the site. 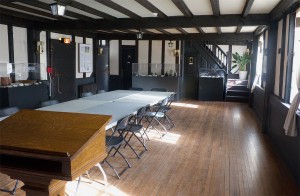 The Royall House Museum and Slave Quarters has come a very long way in telling the story of all of the inhabitants from the period they are interpreting, but there’s still a lot that visitors are missing. The overnight I spent there helped me understanding just how huge the gaps in the story are. On a typical tour, visitors are guided through the colonial mansion on the property and told the story of the intertwined lives of the Royall family and the people they held as their slaves, and that’s an important story to tell, but it’s one that a historic site can tell whether or not the site includes still-standing slave quarters.

The colonial mansion is a different story; every room is filled with period furnishings, some owned by the Royalls. The contrast between the slave quarters and the mansion illustrates a familiar problem in museum work, which is that the belongings of wealthy and privileged people have been preserved over time, and the belongings of the poor and enslaved were used until they fell apart or were discarded. There simply isn’t the same stuff available. Yet, a few years ago, the Royall House Association transformed two rooms in the mansion from a colonial revival treatment they had used for decades into historically accurate spaces. Using an inventory of the house written as part of the executing of the first owner’s will, the Association started b 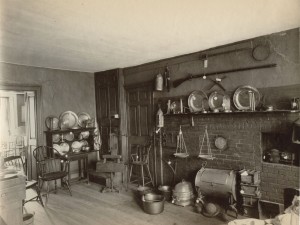 y taking erroneous items out of the chamber above the kitchen, and talking to visitors in an empty room. Once they secured the funding, they added the objects that would have actually been there (mostly replicas). Through an incredible amount of work and dedication, the house is now quite accurate to the inventory. 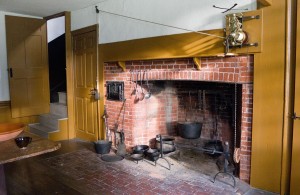 Accuracy takes on a different meaning when you are sleeping in the place that was once the site of someone’s captivity. The whole Slave Dwelling Project takes a lot of imagination. Each participant works to imagine ourselves in the past, even though we cannot recreate the enslaved Africans’ experience. So in the spirit of the project, imagine with me: what if recreating the slave quarters to look and feel as it did in the mid-eighteenth century were a priority? A lot would be conjecture, of course. The project leaders might find it difficult to spend time and money installing an exhibit when they knew how much research there was still to be done, but there will always be more research to do. Historic house museums have always relied at least a little bit on conjecture. A few generations ago, many historic house museums were downright fanciful, with highly romanticized visions of the past influencing every element. It would be a shame to let trends toward accuracy hold the museum field back from achieving more authenticity. After all, the purpose of making historic houses accurate is to make them represent the past authentically, isn’t it? Every museum finds a balance between presenting only what they can confirm and presenting their best guesses about the past in order to fill in the gaps in the documented story.
Museums need to take the initiative to tell the stories of enslaved workers more concretely. I don’t fault the Royall House for the fact that the “slave quarters” I slept in for one night was a well-insulated room with a hardwood floor. They have already done amazing work transforming their interpretation into something more honest than it had been. Now, other museums should emulate them but take it a step further. Of course, this work is time-consuming and expensive, so maybe I should be calling on funders and foundations to get on board.  Who is up to the challenge?

The Massachusetts Historical Society’s Current Exhibition, “Letters and Photographs from the Battle Country,” Explores the Experience of Massachusetts Women in World War I