Visitor Studies in the Wild?

Raise your hand if you expect to be asked, “So, what do you do?” or “What are you studying?” more than once in the next couple of weeks. This is the season for parties with people you don’t know very well, friends of friends and friends of family. Personally, I’m still figuring out how to answer these questions in a way that satisfies both me and the asker. I’ve run into a fair number of people who think that the only jobs in museums are curator and tour guide, and don’t understand that I’m not currently either of those. However, a lot of my friends and some recent acquaintances also like to ask me my professional opinion on this or that museum they have visited – and while it’s fun to be asked, it’s hard for me to find an answer between launching into a full exhibit review and just saying “oh, it was cool.” 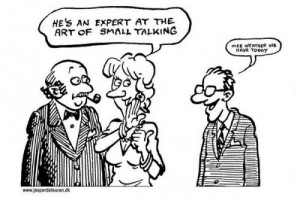 I want to share with you a new approach I’ve been trying out. As soon as I can, I turn the conversation to be about the other person’s experiences. I know, recommending that makes me sound like a networking coach, but there is a reason beyond the truism that people like to talk about themselves. I like to ask, “What do you think of that museum?” If they hesitate, I explain that I am really interested to know, because museum exhibits aren’t made for museum professionals,* they are made for everyone else, so it’s their opinion that matters. Sometimes this question is far too broad, so I ask, “What was your favorite part?” or “Was there anything in particular that stuck with you?” Recently I had friends tell me that they love the way the Museum of the American Indian is divided into small sections, each telling a story that’s fully independent of the others. I was surprised because the element my friends liked was the center of many critiques of that museum. I wouldn’t use one conversation as a formal exhibit evaluation strategy, but it gave me new information to think about.

Another question I’m learning to use is “What’s your favorite museum?” or “What’s the most memorable museum you’ve been to?” This can also be a fun icebreaker when you are suddenly making small talk with a small group of people. But beware, the last time I did this, I learned a lot more about an – um, anatomically-focused – museum in Iceland than I ever thought I would know. I haven’t yet had the opportunity to ask someone who says they don’t like museums what they don’t like about them. I want to ask, “Are there any exceptions? What’s different about them?” I also want to ask, “What do you think of when you think of museums?” The problem, of course, is that I have usually already blown my cover, and the other person knows they are talking to a museum-lover.

Have you tried this type of question in a social setting? What have you learned?

*Don’t tell that one very old-fashioned and inward-focused staff or board member at your organization that I said that. There’s one in every family (or museum).

Weekly jobs round-ups will be back in 2015