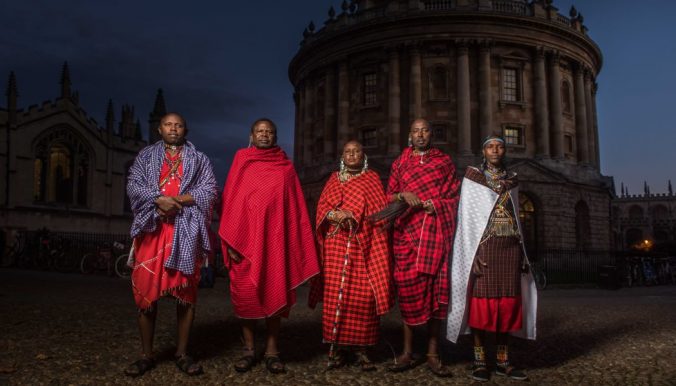 The Maasai have been part of a process of cultural decolonization at Oxford’s famous Pitt Rivers Museum. The Living Cultures initiative is a collaboration between the museum, a Maasai community based campaign group called Oltoilo Le Maa, and community development organization InsightShare.  This initiative began when Maasai activist and Director of Oltoilo Le Maa, Samwel Nangiria, visited the museum for a conference last November. Upon walking through the museum he was shocked to see his own culture, objects from the Maasai community, “[They were] poorly described, with a lack of what the object is meant for [and its] cultural significance.” He described his heart beating fast “Because I know our culture is not dead. It’s a living culture.”

After expressing his discomfort with the museums director, Laura Van Broekhoven, he was invited back with four other Maasai leaders from Tanzania and Kenya. The purpose of the visit is to realign stories and descriptions of artifacts, showcase their powerful films and discuss how they use participatory video to bring sharply into focus their current land rights campaign. The Maasai leaders will work with the museum to change the way their living culture is represented beyond the framework of the imperial past.

This is especially important as the delegation has identified five of the sixty objects they have examined as sacred, which “they would not expect to find elsewhere apart from within their community.” One of which is an orkator, a bracelet that symbolizes the death of a father and is a form of inheritance that would be passed down through generations. As the bracelet cannot be sold or even given, it represents the darker side of many imperial ethnological museums. The Maasai believe that bad fortune may have come upon the family from which it was taken.

While this model of “originating-communities” visiting a museum for a week at a time is not sufficient to break down the colonial structures upheld by museums, the Pitt Rivers Museum is taking a step in the right directions by acknowledging the narratives of the people from these living cultures.

Where in the World is Salvator Mundi?