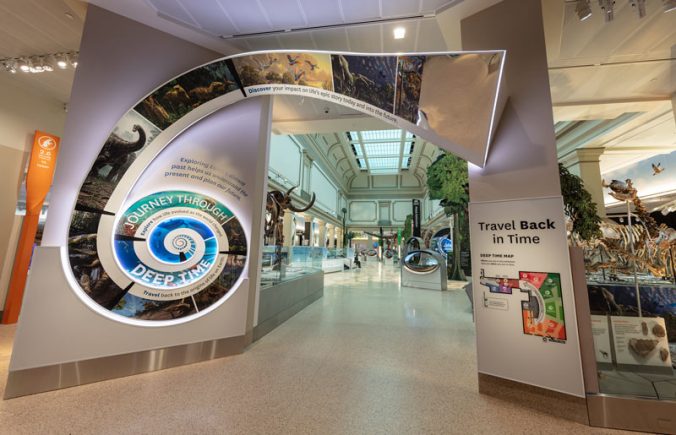 The opportunity to travel into the past has arisen at the National Museum of Natural History in D.C. The famous Fossil Hall has been closed for renovations the past five years, and I am in the lucky position of being around when it reopened with its new exhibit: Deep Time, funded by a whopping $35 million from David Koch. Despite Koch’s controversial ties to this exhibit, I’m hoping this little peek will inspire you to travel back in time with the Smithsonian.

First, let me briefly describe the old gallery. It was basically two paths one could take between static displays of bones and replicas of said bones. There were wooden barriers keeping the visitor at bay. There was frankly little color besides white and brown—some pops of green to give the impression that we are amongst some Jurassic Park ferns. Walking through this ancient exhibit, you couldn’t feel the danger that these giant beasts once held. Those real-life monsters were once the rulers of the land, and the old Fossil Hall had its shining moment a few decades ago, but it was due for a reboot.

The new director explained how the original Fossil Hall opened in 1911 and was partially renovated a few times over the next century but had never undergone a remastering that integrated the science and technology from all that time. So, the exhibit closed in 2014 and now here we are in 2019 with an unforgettable summer for dinosaur and museum lovers. As one team member put it, this new exhibit shows how all life is connected.

The old exhibit had the dinos mainly standing alone, but in this exhibit, they were interacting with us and each other. They are fighting to the death and hanging over to look at us as we look at them. There are versatile interactives from high-tech computer games to closer looks at 3-D scans of skeleton heads, to automatons, to bronze statues you can get up close and personal with. Though really, everything can be considered personal in this exhibit, because the message is clear as one travels from deep in time to our future that though humans weren’t there to save the dinosaurs, we are here now to save the Earth from ourselves.

Recently, I got to sit in on an early stage exhibit planning meeting. There were basic concept designs on the screen to show where the large artifacts would go. The team consisted of curators, an educator, an editor/writer, a project manager, a designer, and a consultant for discussing the experiential side of the narrative at hand. They spent an hour trying to nail down the Big Idea and major outcomes as personalities clashed. I was reminded how much goes into making an exhibit. Also, getting to listen to a museum “outsider” in the consultant was interesting because I finally understood that I am now an insider—I’m understanding more everyday what goes into running a museum, and that is great, but it does take away the option of a simple jaunt through an exhibit when I am focused on the application of museum studies.

I will have to walk back through Deep Time with an outsider, so to speak, because their mindset is “inside” all the fun. I want to give huge congratulations to the Deep Time exhibit planning team for bringing some magic back to the museum, the National Mall, and millions of kids of all ages.