The Desecration of Memory: Bigotry and Violence Against Museums and Markers 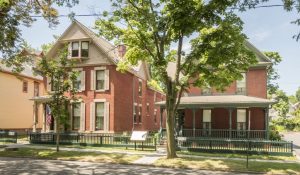 The Susan B. Anthony Museum & House, in Rochester, New York.

On September 26th, 2021, a fire engulfed the back porch of the Susan B. Anthony Museum & House in Rochester, New York. The fire department was able to contain the flames, sparing any historical artifacts from destruction, though carpets and a doorway were damaged. It was clear, as soon as surveillance footage was played back, that the fire was no accident: a person, whose face was covered, was holding something by the porch just before it broke out.

Just weeks before the incident at the suffragist and reformer’s home, the marker memorializing the murder of Emmett Till went missing. Such signs have been repeatedly shot, doused with acid, thrown into the river, and vandalized with racist messages throughout the years; and this one disappeared not a week after the 66th anniversary of the fourteen-year-old boy’s death at the hands of white men. 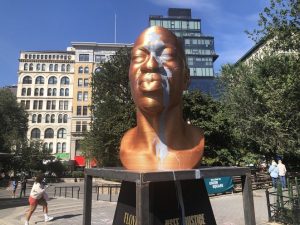 At the beginning of October, a statue of George Floyd in New York City was vandalized, as a man hurled paint at the large bust of the man whose murder at the hands of police officers helped spark 2020’s worldwide Black Lives Matter movement. The bust of Floyd — part of a display which also includes statues of Breonna Taylor and John Lewis — was unveiled just two days before it was damaged. Earlier this year, when it was displayed in a different location for Juneteenth, it was vandalized with white supremacist markings five days into its run.

And since May, the Alaska Jewish Museum in Anchorage has experienced more than one case of antisemitic vandalism, which has caused museums across Anchorage to rally in support of the institution as they seek answers, justice, and healing.

Hatred and violence of this magnitude, against museums and markers meant to remember world-changers, marginalized communities, or those who have lost their lives as a result of racism and bigotry, is a frightening, jarring thing. It has seemed to me that every time I look at museum news lately, there is a new incident.

As a training museum professional, it hurts, discourages, and angers me. But for the communities against whom the violence is leveled, I cannot even begin to imagine the agony. “In some ways I feel they are enjoying our pain,” Ollie Gordon, Emmett Till’s cousin, told the Atlanta Black Star in September. “Or they are in pain themselves and they know no other way to deal with it.” Gordon, who was living with Emmett at the time of his murder, shared that every time the markers commemorating his cousin’s death have been vandalized, it has been like salt poured in the wound for their family. 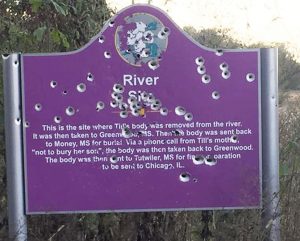 One of the markers memorializing the murder of Emmett Till, ridden with bullet holes.

In the same article, Patrick Weems, the executive director of the Till Center, clapped back against those who posited that the sign’s most recent disappearance was the result of a traffic accident and not an intentional act of bigotry. “We’ve never had a sign that’s been accidentally vandalized or taken down,” Weems argued. “These have always been intentional by folks who want to erase this history.”

A desire to erase the history of racism against Black individuals, antisemitism against Jewish communities across the globe, and the efforts of women to gain the same rights as men — that certainly explains some of the motivation behind the acts of desecration I’ve included here. Museums, markers, memorials — these all serve as keepers of historical memory, and as reminders of the darkness and hatred that has come before us, so that we should never forget.

Yet the Susan B. Anthony home, the Emmett Till marker, the George Floyd bust, and the Alaska Jewish Museum exist not only to remind modern Americans of the movements and atrocities of the past, but to honor these people, as well. Museums and monuments have the opportunity (and, indeed, the responsibility) to give visitors safe spaces to learn about the lives of and pay respect to those members of marginalized communities who have lost their lives or fought to make changes. It is a truly devastating thing when these spaces are hatefully attacked and compromised, taking away people’s opportunity for safe reflection.

I believe it is necessary to mention here that keepers of historical memory must be careful about who they honor. Calls for the removal of statues of Confederate generals cannot be placed in the same category as the vandalism of the Emmett Till marker. The latter was an innocent victim to the very same racism and violence that the former stands for. And though the secession of the Southern states in a desperate attempt to retain slavery, and the resulting Civil War, must always be remembered, the legacies of its leaders should under no circumstances be honored the way that of Emmett Till’s is.

The desecration of historic homes, sites, and markers not only discourages museum professionals and keepers of historical memory, but hurts and endangers members of marginalized communities. Every museum must do its part by calling out such acts of hatred, standing in solidarity with its fellow institutions, and paying careful attention to whose legacies it honors within its walls.

Though these types of bigotry and violence will likely continue as long as such things are tolerated in our country, museums have a responsibility to provide their visitors with a safe space to process this pain, and continue honoring the memory of those who experienced such hatred in life — and cannot even escape it in death.

Museums for the Future