Today’s post comes to you from Sally Meyer, current Tufts Museum Studies and History M. A. candidate. To read some of her other work for the blog, click here.

Amanda Figueroa and Ravon Ruffin are consultants in the museum field. Together, they started the Brown Girls Museum Blog (BGMB). Their blog, particularly the critical thought section, is interesting, thought provoking, and addresses a lot of the long term issues museums face. Most notably the need to increase diversity in all facets of museum work: staff, visitorship, membership, interpretation, and approach to collections. They talk to artists, talk about their work, about being young professionals, review exhibitions, and provide fresh perspectives on a variety of issues in the museum world.

The Washington Post: “For decades they hid Jefferson’s relationship with her. Now Monticello is making room for Sally Hemings.”

Monticello, the historic home designed by President Thomas Jefferson and built by the enslaved men and women he held in bondage, is gaining a space to tell a more complete story. Jefferson is believed to have had a relationship with Sally Hemings, an enslaved woman who was part of his wife’s estate. This article in the Washington Post tells of how the historians at Monticello are working to restore the room they believe she may have inhabited. The article is a reminder of the importance in museums of working to include marginalized people and of emphasizing the “crueler truth” of the American story.

Meeting the Standard: The High Stakes of Shifting Practice

Today’s post comes to you from Sally Meyer, current Tufts Museum Studies and History M. A. candidate. To read her other work for the blog, click here.

Education in the United States has become more than the imparting of knowledge onto the country’s young people. In a more globally connected world, school quality and performance has become a national and international issue. Testing to evaluate students’ progress has been a large part of this process, and as a result, a large part of how schools receive funding and support in the most recent decades. The high stakes students and teachers face have created tensions across the educational system. It also presents a difficult question for museum educators to grapple with: where do we fit in?

The first step for museums is to recognize that this barrier exists. Teachers often have a quick response to a new field trip proposal: there is not enough time or money. Some teachers however, believe that “standardized tests and Common Core Standards…are actually the largest constraints.” Often field trips or school programs can only happen after the stress of these exams have passed. Many museums understand this landscape and recognize that to many teachers, field trips are a luxury or a fun outing. Yet while teachers call for reform of testing, museums largely do little to debate the format of the required exams. Instead, many museums have tried to stay relevant by fitting themselves to the mold that the national and state standards present. However, the museums that do not follow this path have found phenomenal success. Museums and cultural institutions that push from the outside and work to prove the validity of what they can best provide that schools cannot are largely more successful and farther ahead of the curve.

To achieve the goal of staying relevant and helpful in the age of increased accountability and standardized testing, museums must be leaders in the field of informal education research. One example is the Isabella Stewart Gardner Museum in Boston, which has worked hard to foster a program that moves with students through their entire high school career. The Gardner has used a basis of theory as well as extensive research to determine what skills their students acquire by coming to the museum and working with the museum educators. The Institute of Contemporary Art’s (ICA) Teen Program is another example of a highly successful program that has become an integral part of the museum’s framework. The teens involved in the program lead tours, make video art, do photography, learn slam poetry, and participate in a wide variety of other subjects. This program is giving teens a place to go after school that provides emotional support as well as supplements the lack in arts education in public schools. The program serves about 8,000 urban youths annually, at little to no cost for the students, and has won numerous awards for its success in fostering future artists, museum visitors, and engaged citizens.

We say over and over that the system must change, the tests must change, and expectations must change before we can have the biggest impact. The status quo however, is a difficult thing to break. Museums cannot just sit idly by waiting for the standards to shift in our favor or the testing format to reflect what children learn in our spaces. Instead, museum educators must become societal and political advocates for change in the American education system, sticking up for students, parents, teachers, and themselves if they hope to make any meaningful or lasting change. Also essential in encouraging change in the system is for museum educators to get involved in the community. Learning about school board meetings and attending them to be knowledgeable enough to speak up could create a shift in thinking. While the future for students, teachers, and museums looks bright, museums that choose to engage in K-12 programming moving forward must continue to keep their eye on their strengths and work to support and advocate for schools, teachers, and students within these frameworks.

In a blog post titled “The Weird Complicated Sexist History of Pockets,” Rachel Lubitz says that a lack of enough space to hold objects is something women have suffered through for hundreds of years. She finishes with the question “how much longer must we suffer?” While her position seems slightly exaggerated, she makes an important point. Clothing is essential to self-expression and societal understandings. Frequently, clothing can cause people to make judgments about what you value, your gender identity, and what your societal class is. However, the author’s blog fails to acknowledge how pockets and bags contain what we believe we cannot live without. Attachment to these objects, and the importance of pockets that hold them has not changed much in over two hundred years. A pocket that rests behind glass at the Massachusetts Historical Society, confirms this phenomenon.

This particular pocket, though it represents a broad and common need, is believed to have rested on the hips of Abigail Adams, abolitionist, women’s right advocate, and wife of John Adams. Pockets in general, and this one in particular, were not expensive or glamorous objects. Most however, that have survived the last two hundred years are often hand embroidered and decorated. This pocket is a much better representation of what ladies usually wore. It speaks volumes about Abigail Adams but it is also worth study because of what it says about the human and female condition. An analysis of how it was worn and used reveals the natural human attachment to objects.
Women in the 18th century had few rights to property no matter their social class. As such, pockets represented an opportunity to keep personal property close by. Much as people do today, Abigail Adams kept her keys in her tie-on pocket. For 18th century women, keys were indeed important to their status. Having keys close by would be a definitive source of emotional security. Pockets also held personal money. Pockets were valuable on their own, but mostly their value lay in what they contained. In addition to money and keys, women kept jewelry, mirrors, combs, personal letters, and even food in their tie-on pockets. 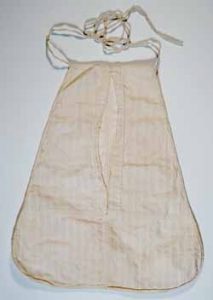 Pocket believed to have belonged to Abigail Adams at the Massachusetts Historical Society.

Much of what we carry with us today has only changed slightly since the 18th century. Money and keys dominate listings of what women carried in the pockets tied around their waist. These items ring true to our own pockets and handbags. Car keys, train passes, money, and cellular phones reflect a need to be mobile and communicate at will. House keys, membership cards, calendars, snacks, and bottled water help us make it through our day safely and securely. The concept of objects close at hand has permeated the lives of women and men for hundreds of years and continues to do so.

Pockets and what they contain are important evidence for what we value. Practicality has often surrendered to fashion when women’s clothing designs were not built for practical space. Historians reference pockets and how a lack of them in women’s clothing reflects a subtle sexism. Women are not supposed to need money and “things” in the same way men do. This 18th century pocket does show however, that women did need objects and personal items close at hand. Even the purposes of these items have not changed much at all even as society has shifted. Letters to cellular phones, oranges to granola bars, and pantry keys to car keys are not so different when placed side by side. Abigail Adams’s pocket was saved because it was associated with an important person. The object itself however reflects heavily the human, and female, condition.