We study the biomechanics and neural control of swimming in fishes. In any animal, locomotion requires a complex set of nested feedback loops. For example, the brain activates a neural circuit called a central pattern generator (CPG) that produces the basic pattern of muscle activity for swimming in fish, for flying in insects, and for walking in humans. The CPG activates muscles that produce force to bend the body, which interacts with the fluid around it.  But the fluid also produces forces back on the body, and the body movement affects how much force the muscle can produce.  The CPG then responds to sensory inputs, changing the pattern of muscle activity to respond to perturbations, such as turbulence in the water for fishes, or uneven ground for walking animals. The brain receives further sensory inputs from senses such as vision, the vestibular system, and the lateral line, an extra sense that fish have to detect water moving around, which then allow it to modulate the CPG in more complex ways. 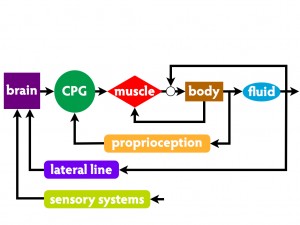 Work in the laboratory focuses on the interaction of all these different components, using engineering techniques to study water moving around fish, as well as biomechanical and neurophysiological techniques to examine sensory systems and neural control systems.

We use a technique called particle imaging velocimetry (PIV) to visualize how water moves around fish as they swim. A high power laser is used to illuminate a single plane in the tank where the fish is swimming. 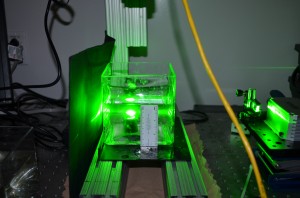 Small reflective particles are placed in the water, and a camera is used to track how those particles move in the water around the fish. This lets us understand better the forces that a fish must deal with as it swims through turbulent water, and also the forces that a fish produces using its fins in order to switch effectively, turn rapidly, and maintain stability. We are particularly interested in understanding the fish’s body and its fins, which are flexible, bend in response to both internal muscular forces and external fluid forces. This fluid-structure interaction may actually allow the fish to respond more effectively and more rapidly to external perturbations, such as turbulent eddies. 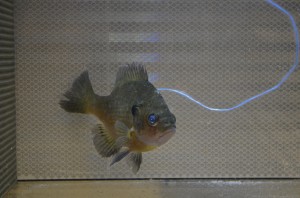 To address these questions, we also use computational simulations in collaboration with other laboratories. These simulations allow us to make “what if” experiments that would not be possible in reality. For example, what if a fish’s body was twice as stiff? Or, what if its muscles were twice as strong?

We are studying how the intrinsic properties of muscles can help animals respond to perturbations in their environment.  Muscle is a very complex, active material. When an animal is hit by an unexpected perturbation, like a vortex in the water, the muscle begins to change how much force it produces – even before any sensory system can detect the perturbation.  We use isolated muscle preparations and whole-body preparations to measure how muscle can respond to perturbations, even as it produces energy for locomotion.

The main sensory system that we study in the laboratory is the lateral line system, an extra sense that fishes and amphibians use to detect how water moves around their bodies. Fish use their lateral lines for schooling, for prey capture and predator avoidance, and to swim upstream, among other things. All of these behaviors require them to detect water flow from external sources. However, the fish swims, it causes the water to move around itself, stimulating its own lateral line. Our work aims to understand how fish can filter out this self-generated signal in order to detect external signals.

We also study the proprioceptive system in lampreys.  These are sensory receptors that let the fish know how much its body is bending while it swims. We are studying how these cells respond to different types of stimuli, and what effects they have on the rest of the locomotor circuit.

Our work on neural circuits focuses on the central pattern generator (CPG), a relatively small circuit located in the spinal cord that both produces the basic pattern of muscle activity for locomotion and responds to sensory inputs. Here, the work is primarily on the lamprey, the most primitive living vertebrate, and the only one for which we know the cell classes that make up the CPG and their main connections. The work aims to understand how the CPG responds to proprioceptive sensory inputs, which let the lamprey know how its own body is moving. In the lamprey, the proprioceptive system is made up of mechanosensory cells located on the edges of the spinal cord. We can stimulate the cells and observe how the CPG responds, but we are most interested in understanding how the system behaves as a feedback loop: during normal swimming, the CPG activates muscles that bend the body, stimulating the edge cells, which synapse onto the CPG circuit and cause it to change the muscle activation pattern.Along with experimental measurements, we are addressing the importance of feedback using computational models of the CPG, the edge cells, the lamprey’s flexible body, and the fluid motion around it. This computational work is a collaboration with Lisa Fauci’s group at Tulane University.