Ah, deadlines. Whether you’re finishing an assignment or paying your utilities bills, deadlines don’t exactly engender feelings of warmth and giddiness, at least in my experience. Even so, deadlines exist for a reason; I can’t just ignore my electric bill, no matter how happy it makes me in the moment, without expecting negative downstream implications. My electricity would eventually be shut off, thereby preventing me from turning my online assignment in on time, or, worse yet, from accessing my Netflix account. Clearly, then, there are times when it’s probably detrimental for me to feel positively in the immediate moment, as well as times when it’s probably beneficial for me to feel badly, at least for a little while. 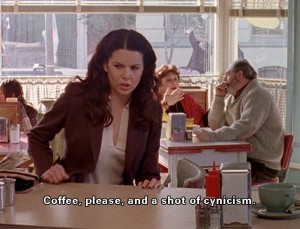 Speaking of Netflix, though, if you’re anything like me you probably find their algorithms endlessly fascinating (can you even imagine where we would be without Netflix?! But I digress). For example, I recently accidentally clicked on a link for media suggestions tailored to me based off of my viewing history instead of the link for my overstuffed self-selected queue. I was overjoyed to discover, purely by happenstance, that one of my favorite television shows of all time, Gilmore Girls, was finally available for online streaming. Perhaps my perception is tainted, but I don’t think that I watch other shows on Netflix that would predispose me to watching Gilmore Girls; but obviously Netflix knows me way better than I think it does.

Netflix’s assessment of my liking behavior, however, is neither here nor there. Why I bring this incident up is because one of Gilmore Girls’ main protagonists, Rory, has something of a quarter-life crisis that derails her future in ways that probably only a serialized television show could resolve. As a lifelong aspiring journalist, Rory writes for (and eventually serves as editor of) the Yale Daily News, and is even awarded a prestigious internship at an up-and-coming regional paper. When her boss informs her that she doesn’t have what it takes to be a journalist, though, Rory goes off the deep end, acting so rashly and selfishly that she ends up in legal trouble, takes a leave of absence from school, and cuts off all contact with her best friend (and mother), Lorelai.

While the insights one can take from a television drama geared towards a predominately teenage female demographic should probably be taken with a grain of salt, there are nevertheless many aspects of Rory’s meltdown that map onto recent scientific evidence concerning why context matters when we’re deciding how we want to feel. We’ll get to those ideas more in our next section.

When Can Wanting to Feel Good be Bad?

Since positive emotions tend to make us feel really great, it’s probably counterintuitive to consider that they might sometimes not be so good for us. Yet emotion science has paradoxically demonstrated that if I really want to feel happy I’m going to actually feel less happy than if I don’t really want to be happy. Why is that? An easier way to consider this problem is to think about emotions as goals. Let’s say my goal in a given moment is to feel happy. If I highly value feeling happy but try to become happy by, say, not paying my water bill, I’m inevitably going to fail. My failure to become happy will lead me to feel disappointed, which will undermine the very happiness I was trying to achieve in the first place (Schooler, Ariely, & Lowenstein, 2003; Mauss et al., 2011).

Of course, wanting to feel happy isn’t always bad. Indeed, it may simply be the case that valuing certain types of happiness is bad. In my last post, I talked about all of the different ways that I tend to define happiness. While there are innumerous things I could list that make me happy, the happiness that all people seek tends to fall under one of two categories: hedonic happiness, which is happiness derived through “feeling good” and experiencing pleasure, and eudaimonic happiness, which is happiness derived through meaning-making. It’s been found that these two types of happiness have very different effects. In one study, people whose ventral striatum was activated during eudaimonic (or prosocial) decision-making were more likely to experience a long-term reduction in depressive symptoms, whereas people whose ventral striatum was activated during hedonic (or selfish or risky) decision-making were more likely to experience a long-term increase in depressive symptoms (Telzer et al., 2014). These findings suggest that perhaps the seemingly perplexing finding that people who highly value happiness are less happy than people who don’t highly value happiness may be at least partially explained by differences in how people try to achieve happiness. They also explain why Rory, who made a lot of impulsive decisions while simultaneously shutting out the most meaningful person in her life, might not have achieved the positive emotional experience she thought she would.

Regardless of how people define happiness, though, positive emotions can still be problematic. Independent of how happy people are, too much positive emotion variability across one day (or even two weeks) is associated with things like poor well-being, less satisfaction with life, increased anxiety, and even greater depressive symptomology (Gruber et al., 2013). This means that experiencing too much or too little positive emotion in a relatively short timeframe can be maladaptive. Thus, as with most things in life, positive emotions should be sought out (and experienced) in moderation.

When Can Wanting to Feel Bad be Good?

Even if you bought my previous claim that positive emotions can sometimes be detrimental to us, you might still lose me now, because I’m going to suggest that negative emotions can sometimes help us. I know, I know, how can something so bad be good? Well, as was the case with positive emotions, it’s probably useful to think about this question while considering that emotions can be goals. We tend to seek out negative emotions when they’re useful for us (Tamir & Ford, 2009). We also know that anger, a highly arousing negative emotion, is associated with aggression, and that this link can be increased when the left frontal cortex is manipulated by a technique called transcranial direct current stimulation (TDCS; Hortensius, Schutter, & Harmon-Jones, 2012). Anger is a very negatively connoted word, but it isn’t always destructive; on the contrary, anger can sometimes be beneficial, even when one is angry about something as divisive as the Israeli-Palestinian conflict, so long as one doesn’t have a strong hatred for the person or group they’re dealing with (Halperin et al., 2011).

Keeping all of these aforementioned findings about how negative emotions like anger can sometimes be good in mind, let’s revisit Rory’s breakdown. Had she been angry instead of, well, heartbroken by her boss’ critique of her, she might’ve become aggressive enough to be highly motivated to prove him wrong. Up-regulating this anger probably would’ve kept her from leaving school and otherwise derailing her life. If she came to hate her boss and became too angry or aggressive, though, she might still have run into trouble with the law; so, again, it’s probably best to seek out and experience negative emotions in moderation.

We still have a lot to learn about how wanting to feel good can be bad and how wanting to feel bad can be good, especially in terms of understanding the neural mechanisms that underlie how and when we decide to up-regulate or down-regulate positive and negative emotions. Even so, there seems to be a growing consensus that emotions, be they positive or negative, all have adaptive value in different contexts. Rory Gilmore learned the hard way that she has to take the bad with the good, and eventually she rallies to get her life back on track. This positive-negative emotion balance she achieves is critically implicated in the treatment of various psychopathologies, like depression and bipolar disorder, which we’ll discuss more next time. Until then, I’m going to seek out hedonic happiness by re-watching a lot more episodes of Gilmore Girls. Don’t worry about my eudaimonic happiness, though; I’ll be sure to laugh through them all in the company of good friends.