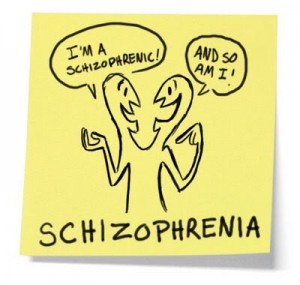 Schizophrenia is a complex neurological disorder, which causes mental and physical tendencies as well as abnormal behavioral. Treating schizophrenia is challenging because of its complexity, severity and long-term effects. Because schizophrenia encompasses so many aspects of the individual’s demeanor and disposition, it is even more difficult to effectively address all of the symptoms of the disorder. Additionally, it is hard to have a standard of medications that will be effective for all individuals. As a result, there are many different types of treatments and medications for treating schizophrenia (Beckmann, et. al, 1979). These different classes of medications include “conventional, atypical and partial dopamine antipsychotics (Miyamoto, et al., 2004).” Most of these classes of medications act on dopamine systems in the brain and though antipsychotics are the most common and advantageous, they are still limited in their ability to treat schizophrenia. 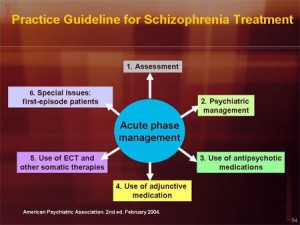 Antipsychotic (neuroleptic) drugs are the primary treatments administered in acute episodes of schizophrenia, however, the impact and efficacy of the treatment is minimal in most patients. In some cases, patients quickly revert to the schizophrenic tendencies shortly after not taking these medications. Other classes of drugs for treating schizophrenia, sedating drugs like chlorpromazine, are thought to be “more effective in controlling highly excited or agitated patients (Kane, 1987)” and “non-sedating drugs like haloperiodol, are thought to be more effective for patients who are withdrawn or psychomotorically retarded (Kane, 1987). 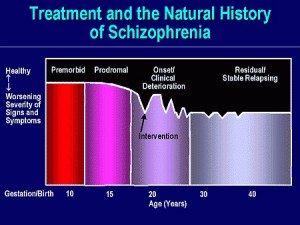 Other forms of treatment include, CBT, cognitive behavior therapy, which is seen as an effective treatment in schizophrenia. Key features of delusions that occur in “schizophrenia like conviction, significance, intensity, and inflexibility are the focus of CBT interventions and are therefore, easily treatable with CBT (Addington, et al., 2010).” SST, social skills training, offers “schizophrenic patients the opportunity to work on their deficits in social skills, which is a significant characteristic of schizophrenia (Addington, et al., 2010).” 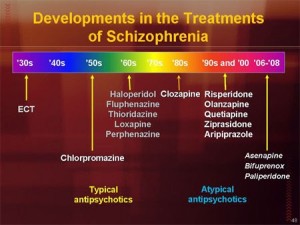 In addition to there being various classes of treatment for schizophrenia, there are also an assortment of treatments that are administered during different phases of treatment. The acute phase in the treatment of schizophrenia “involves an attempt to eliminate the symptoms related to acute exacerbation (Kane, 1987).” During this period, antipsychotics are used to lessen the effects of schizophrenia like hallucinations and delusions. The improvement achieved from this period will serve as an indicator of the expectations and goals of treating the patient. The subsequent phases include continuation and maintenance. Depending on the progress achieved during the acute phase, the decision of continuing a type of treatment will be determined. If the treatment is seen as effective, then the next stage of maintenance will be a period of keeping the patient on the track to recovery. This is reached when a suitable treatment regimen is found for the patient and to ensure that the original episode does not reoccur (Kane, 1987).” 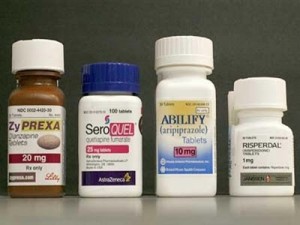 Treatments like CBT and SST offer schizophrenic patients with an alternative to pharmacological drugs or to be used in conjunction with antipsychotics. Therefore, this allows the treatment of schizophrenia to be more effective because it is not only being treated with pharmacological drugs, but also with cognitive therapy and skills training. This method of treating schizophrenia eliminates the single dependence on antipsychotics for treatment because many of these drugs aren’t effective in maintaining positive symptoms, improving relapse rates and reducing cumulative morbidity.