Well, by now enough time has past since my last post that I’ve binge-watched my way through most of Gilmore Girls. I always lose interest after season five; the show (sadly) jumps the shark shortly thereafter. Fortunately, there are plenty of other shows that also jump the shark to choose from. Since I was already watching characters who wanted to feel good feel badly anyway, I figured I might as well up the ante and revisit Homeland, a thriller that centers on a brilliant CIA agent, Carrie Mathison, suffering from Bipolar I Disorder. After all, wanting to feel good can sometimes be worse than upsetting for some people; it can even sometimes be clinically incapacitating.

How Are Positive Emotions Bad When You’re Really Up?

Although experiencing positive emotions 24/7 may seem cool, most people affected by bipolar disorder would probably beg to differ. It certainly debilitates Carrie; her job and her life are constantly on the line, in no small part because she takes risks no one else at the CIA will. Now, as much as I enjoy Homeland, I will say that Carrie’s presentation of bipolar disorder isn’t exactly consistent with the explicit criteria set forth by the Diagnostic and Statistic Manual of Mental Disorders (DSM-5; American Psychiatric Association, 2013). Roughly, though, Homeland is correct in portraying the manic states that typify the first part of bipolar disorder as being characterized by racing thoughts, grandiosity, decreased sleepiness, excessive talkativeness, risk taking, distractibility, and, in Carrie’s case, increased work productivity (American Psychiatric Association, 2013). 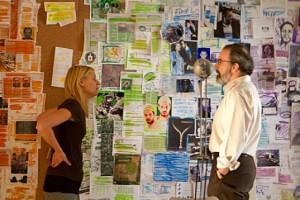 It’s hard not to get tripped up on the idea that people undergoing a manic episode can experience increased work productivity. Corporate America usually rewards this kind of output, doesn’t it? But mania clouds decision-making. Research suggests that while people at risk for experiencing mania, like Carrie, indeed experience greater positive emotion, they also experience increased irritability and have higher cardiac vagal tone, an index of positive emotionality, when watching positive, negative, and neutral film clips (Gruber et al., 2008). Being so hypersensitive to positive emotion that you can’t differentiate between, say, happy and sad film clips can’t bode well for decision-making. Relatedly, people with bipolar disorder and a history of psychosis seem less able to objectively revisit positive emotional experiences than other people. In other words, despite having memories that are objectively as positive as participants with bipolar disorder without a history of psychosis and healthy controls, they have greater emotional responses to these recalled memories. They likewise exhibit stronger left frontal activation, an index of positive emotional reactivity, during positive emotional event recollection (Park et al., 2014). Thus, although experiencing near-constant positive emotionality isn’t preventing people like Carrie from more or less living their daily lives, they are influencing how they perceive the world in consequential ways.

How Are Positive Emotions Bad When You’re Really Down?

Unquestionably, the excessive positive emotionality that typifies mania is bad in and of itself. Yet it’s the second main part of bipolar disorder, the major depressive episode (American Psychiatric Association, 2013), that arguably most upends people’s lives. We already learned that people who really want to be happy paradoxically feel less happy than people who don’t really want to be happy. As it turns out, though, unhappiness isn’t the only unfortunate outcome of really wanting to feel happy; on the contrary, valuing happiness is also associated with depressive symptoms. Moreover, the more one values happiness, the more likely one is to have been diagnosed with depression (Ford et al., in press). Though Carrie’s mania makes her want to feel more positive emotions, she can’t sustain such a state; consequently, she eventually spirals into a depressive state so severe she’s hospitalized.

So, you might be wondering to yourself, if positive emotions can cause psychopathology, can we use positive emotions to make people suffering from psychopathology feel less negatively? Well, yes. Techniques like mindfulness meditation may increase levels of vasopressin and beta-endorphin, as well as increase activation in the left anterior prefrontal cortex, the lateral hypothalamus, and the median forebrain bundle, all of which may lead to increased positive feelings and serotonin release useful in treating depression (Garland et al., 2010). It’s too soon to say, but targeting positive emotions may even eventually be useful when treating people like Carrie, so long as they don’t end up swinging too far back to the positive side.

Today you hopefully learned that excessive positive emotion plays a role in psychopathology, particularly in Bipolar I disorder and Major Depressive Disorder. They implicate frontal processes that may make people suffering from Bipolar I disorder more sensitive to positive emotions, but they may also be helpful in activating frontal processes that aid in reframing emotional events in more positive lights during treatment for depressive episodes. Carrie’s dramatized experience of bipolar disorder, for all its flaws, is to my mind relatable to Americans who suffer from the psychopathology. What remains to be seen, however, is whether people from other parts of the world feel the same way. Do they even want to experience positive emotions the way Westerners do? We’ll discuss important cultural differences in positive emotion valuation and experience next time.

Ford, B. Q., Shallcross, A. J., Mauss, I. B., Floerke, V. A., & Gruber, J. (in press). Valuing happiness is associated with symptoms and diagnosis of depression. Journal of Social and Clinical Psychology.