In just a couple weeks, the Peabody Museum of Archaeology and Ethnology will be hosting Kevin Gover, the Director of the National Museum of the American Indian. You’re invited to a free talk and reception on Wednesday, October 9, beginning at 6p.m. 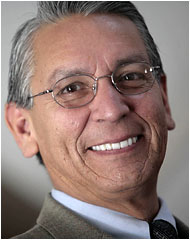 Here’s the invitation for more details:

You are invited to attend a 6:00 PM public talk and reception on Wednesday, October 9 at the Peabody Museum, “”Changing the Narrative: American Indians and American Cultural Myth,” with Kevin Gover, Director, National Museum of the American Indian, Smithsonian Institution.

Kevin Gover is a member of the Pawnee Nation of Oklahoma and has been the director of the National Museum of the American Indian since 2007. He is a former professor of law at Arizona State University and was the co-executive director of the ASU American Indian Policy Institute. He also served as Assistant Secretary for Indian Affairs for the U.S. Department of the Interior from 1997–2000.

Come for the talk at Harvard’s Geological Lecture Hall (26 Oxford Street, Cambridge), and stay for the special reception in the Wiyohpiyata: Lakota Images of the Contested West exhibition in the Peabody Museum of Archaeology and Ethnology.

A little levity for your Monday morning…

5 Places to Check Out Science in Museums this Fall