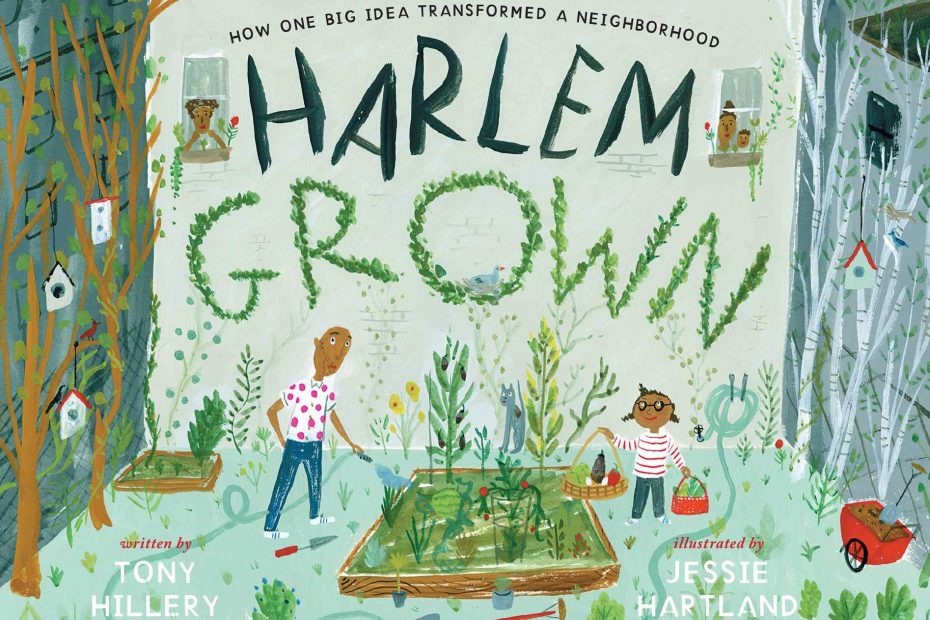 There’s a little patch of Earth in the middle of a Harlem block, right on 134th Street, where big things are happening. Once an abandoned city lot, a thriving urban farm blooms with color. This is the hub of Harlem Grown, the true story of how one school volunteer and his students re-imagined a city neighborhood.

It all began with an idea. Tony Hillery, the book’s author and founder of the independent non-profit that shares its name, describes how the beautiful urban farm started as “the haunted garden”. An empty lot cluttered with old furniture and broken bottles, it sat abandoned across from the PS 175 school where he volunteered. When “Mr. Tony” visits the school and learns about the haunted garden, he has the idea to clear the lot, one piece of trash at a time, until it transforms into a blank canvas.

The story follows the character Neveah and her classmates, who help alongside Mr. Tony and learn how to plant and harvest a community garden. Soon 400 seedlings are planted, “one for each kid,” and the children practice watering, weeding, and tending to their sprouting plants. As more children wander from the neighborhood and into the garden, Mr. Tony watches and smiles. He builds raised beds for the plants and finds helpers to carry the wood, hammer, and nails. The children see new possibilities growing amongst the green beans, carrots, and cucumbers, and they start to bring food home to their families for dinner.

Harlem Grown depicts the practice of gardening as an ever-learning process. When Neveah visits the lot one day to find her plants looking wilted, Mr. Tony kneels down next to her and surveys her tomatoes and squash.

The story continues with uplifting tones as Hillery describes the hard (but rewarding) work that goes into planting a seed and helping it grow. The urban gardening project soon becomes a movement that transforms the community and creates fresh ties to the environment. Throughout the book there is a growing sense of togetherness, as the children and neighbors tend excitedly to their plants and show care for their special community lot.

With vibrant illustrations by Jessie Hartland, readers are invited to taste the textures of the urban farm and spot colorful details among the vegetation, farm tools, and bustling city life. Neveah shows step-by-step how to start a radish seedling by digging holes in the ground, placing her seedlings inside, and carefully covering them with dirt. The reader can almost smell the bright watercolor illustrations popping from the page – Basil, mint, cilantro, rosemary. Mr. Tony speaks to readers in the language of food, accompanied by whimsical illustrations that invite readers into the harvest.

Among the learning moments in the book include rich depictions of Harlem culture. With Hartland’s detailed gouache illustrations of city life, young readers can spend ample time spotting landmarks like the Schomburg Center for Research in Black Culture, the Apollo Theater music hall, and soul food restaurants on 125th Street. Readers of various ages and ethnicities are depicted in the flurry of city life, mirroring children of color and readers in urban neighborhoods. The vibrancy of the city neighborhood complements the celebration of the community garden, as Mr. Tony and his students bring new life to the vacant city lot.

The book includes instructions to Start A Garden Anywhere in 6 steps. In addition to practical tips like collecting containers or making compost from kitchen scraps, it also encourages an early love for gardening:

Take every chance you can to learn more about your garden. Seek the knowledge of others. The best gardens are the ones that have been influenced by many people.

In a closing letter from the author, Mr. Tony describes how the blocks around the PS 175 school are “a host to fifty-five fast food restaurants and twenty-nine pharmacies, but not a single store from which to purchase healthy food.” When he started Harlem Grown, the underfunded school had no art or gym classes, and his idea spurred from wanting to create a new outlet for the students. With the community garden, they now had the opportunity to learn something new and take pride in their fresh fruits and vegetables.

Since 2011, the first Harlem Grown plot on 134th Street has expanded to 12 sites across the city where children and their parents grow thousands of pounds of fruits and vegetables a year (and share with neighbors!) free of charge. The facilities include soil-based farms, hydroponic greenhouses, and school gardens across the city. Today, Harlem Grown’s mission continues to inspire children to lead healthy lives through student mentorship and hands-on education in urban farming, nutrition, and sustainability.

1 thought on “Book Review: Harlem Grown: How One Big Idea Transformed a Neighborhood”

previousVideo: This Warthog took a trip to the Mongoose Spa
nextSchool Gardens in the City