Renewable energy is a topic in world news that has been growing at an alarming rate.  Mankind has followed a general trend over time that consists of growing rates of energy consumption with a mismatch in growth for new or renewable energy sources (Energy Information Administration [EIA], 2011).  Today, the most popular energy sources are fossil fuels (i.e. Coal, Wood, and Petroleum), but there have been efforts made to move towards renewable energy (i.e. Hydro, Wind, Solar, and Nuclear).  Within the realm of renewable energy, nuclear power has been one of the most controversial topics.  This article will discuss the process behind electrical generation at most conventional power plants, how nuclear energy is harnessed to produce electrical energy, how electrical and computer engineers have been affecting this field, and where nuclear power is headed for in the future.

A conventional power plant converts the potential energy of one substance into another form of energy, which is generally mechanical energy or thermal energy.  Then this new form of energy is used to produce electrical energy.  Through the mechanical energy method, turbines spin using mechanical force produced by the fuel.  For thermal energy, water is boiled to produce steam, which is then forced to rotate turbines.  The rotation of the turbines produces electricity by changing the magnetic field around the coils it is rotating within. The power grid uses transmission lines to distribute the electrical current produced.

Nuclear fission fits into a conventional power plant by using the thermal energy process.  The thermal energy produced by the nuclear fission process turns water into steam, which then spins turbines (EIA, 2014).  The most common material used in nuclear reactors is Uranium-235 because of how easy it is to split apart the atom’s nucleus. Uranium-235 is also used because of how easy it is to set off a chain reaction within this element (EIA, 2015).  This isotope must be processed before it is used in the nuclear reactor, and a small pellet of the processed Uranium-235 “produces roughly the same amount of energy as 150 gallons of oil” (EIA, 2014).  Knowing this detail, it appears nuclear reactors have a much higher energy to fuel ratio than conventional fossil fuel power plants.  Unfortunately, the process of implementing nuclear fission is not at all that simple.  Nuclear processes cause the atom to release energy in the form of heat, as well as radiation, which leads the controversy over nuclear energy.

Nuclear fission in reactors becomes a problem when a ‘meltdown’ occurs.  During the process of nuclear fission, an abundant amount of energy in the form of heat is released that requires the power plant to continuously pump coolant into the reactor’s core.  If for some reason the power plant has an internal error there are measures that workers must take in the plant.  The highest priority is to stop the nuclear fission process completely, and this is done by introducing materials into the reactor’s core that are neutron absorbent.  Once the process has been stopped, the workers must then ensure that cool water is still being continuously pumped into the reactor’s core until the material’s temperature has been reduced sufficiently.  When a failure occurs in cooling the reactor’s core, the water levels within the core begin to diminish; once the water levels reach a critical level, the fuel rods within the core begin to melt.  The radioactive liquids within the core are normally hot enough to begin melting their protective casing. If the liquid melts through all of the cases of the core, then the reactor has suffered a ‘meltdown’ (Matson, 2011).

The radiation that escapes the reactor can be, and usually is, very dangerous to its surrounding environment, which is where the paranoia of using nuclear power plants as energy sources comes from.  Even though nuclear reactors pose such an enormous risk, the probability that the plant’s safety system malfunction is very low.  Another concern with constructing nuclear reactors is protecting them from terror attacks.  Due to the amount of damage that could be done if a nuclear reactor were to be a terror target there has not been much motivation to construct more of them.  A few examples of catastrophic nuclear power plant failures are Chernobyl, Three-Mile Island, and Fukushima.

A few notable nuclear disasters that have occurred are Chernobyl, Three-Mile Island, and Fukushima, and their aftermath has led to various changes in nuclear reactors. Because of the amount of damage the reactor caused when it failed Chernobyl is considered the worst of these failures.  The damage was so great that even today, the region is still considered uninhabitable due to the amount of radiation that still exists.  Its failure is attributed to a large power surge that destroyed one of its nuclear units (Nuclear Regulatory Commission [NRC], 2013a).  Another notable disaster is Three Mile Island.  The damage done by Three Mile Island has not had any notable affects on its plant workers or the general public, but it did bring about change in the nuclear industry.  Its failure is attributed to a malfunction of either a mechanical or electrical system within the cooling system of the reactor (NRC, 2013b).  The final notable disaster is Fukushima.  The damage done by the nuclear reactor at Fukushima has been deemed to not have caused any notable damage in the Pacific Ocean. However, it brought about vast amounts of changes in nuclear reactor back-up systems standards (NRC, 2015a).  Its failure is attributed to back-up systems failing after a 9.0 magnitude earthquake and a 45-foot-high tsunami struck the site (NRC, 2015b).

There are standards that have been evolving to the need of power, to the changing planet, and to new threats.  These standards have been set in order to ensure that nuclear malfunctions never occur and that if they do occur, the damage that can be done is easily contained within the nuclear reactor’s core.  The United States Nuclear Regulatory Commission provides up-to-date articles regarding nuclear reactors that explain safety guidelines followed by all United States nuclear reactors; explain technical standards each reactor must follow; and explain what fuel is allowed to be utilized within the reactor’s core.  This organization also provides licenses, oversight, and regulations each nuclear reactor follows, as well as, information as to how reactors function and the varying different kinds of reactors that exist.  Another organization that aids in the setting of standards includes the Nuclear Energy Institute.  This organization focuses more on the advances nuclear power can take and encourages the publications of work done with nuclear power.  These organizations are also always combating criticism that arises with nuclear power plant failures.

The Role of ECE’s in Nuclear Power, and its Future

In order for nuclear power plants to function properly and safely at full capacity interdisciplinary teams must be willing to cooperate and all standards set by nuclear organizations must be understood and followed.  Many fields contribute to the interdisciplinary team that work at nuclear reactors and these fields include: mechanical engineers, physicists, nuclear engineers, and even civil engineers.

I will be focusing on the roles of electrical and computer engineers in nuclear reactors.  Every power plant requires electrical engineers for two major reasons.  The first is to optimize the electrical power outputted by the power plant.  Power engineers are constantly working on increasing the efficiency of the electrical transmission lines, but unfortunately this field in electrical engineering appears to be dwindling (Nuclear Energy Insight, 2011).  The efficiency increases as the materials used in the technology become lossless, or ‘ideal’.  The second major reason, which has shaped electrical and computer engineers in this industry, is electrical engineers implement fail-safe switches and multiple sensors.  These switches shut off the electrical grid, and any circuit connected, to prevent damage from the actual transmission lines if there ever is an overload of current or voltage.  These circuit breakers also prevent power surges from damaging the nuclear reactor’s core, which could also be catastrophic much like the accident in Chernobyl.  The other aspect electrical and computer engineers work on are the sensors and internal wiring of the nuclear reactor.  Previously, standards within this second major reason did not exist because concerns regarding nuclear processes did not exist until the first major accident in Chernobyl.  Since then, nuclear companies and organizations have been trying to regain the public’s trust by instilling strict requirements that must be met by every nuclear reactor.  Every sensor and fail-safe switch designed and implemented by any engineer in a nuclear reactor must work 10 out of 10 times.

The ongoing functionality of these sensors and internal wiring schemes are essential in ensuring that the nuclear reactor operators safely for various reasons.  These include: pressure sensors, temperature sensors, and current sensors. The pressure sensors are essential for making sure that there is no build up of highly explosive gases within the reactor.  The temperature sensors are essential for making sure that the reactor’s core does not reach critical temperature levels that would cause water to evaporate faster than it was being replenished; this in turn would prevent meltdowns.  The current sensors are essential for making sure that the power being transmitted over the transmission lines does not exceed a specified current or voltage, which could cause transmission lines to melt, burn, or cause mini electrical fires in homes.  These surges could even cause nuclear reactors to explode such as the reactor in Chernobyl.

Since nuclear reactors were first introduced, they have evolved into safer sources of energy.  Despite catastrophes that have occurred in the world, i.e. Chernobyl, Three Mile Island, and Fukushima nuclear reactors still exist and are actually moving forward.  There has been a push for the establishment of small modular nuclear reactors [SMRs], which are nuclear reactors that have been vastly downscaled (Department of Energy, 2013).  There are multiple advantages to SMRs due to their size and compatibility.  SMRs will be significantly safer as they can actually be installed into the ground rather than above ground [Earthquake, tsunami, hurricane, tornado, aviation impact resistant]; SMRs will be more easily coupled with other energy sources; and SMRs will be significantly cheaper to install compared to full sized nuclear reactors.  SMRs will also be implemented on small electrical grids that cannot handle the power produced by large conventional power plants.  Some SMRs will actually utilize fuel that will be safely and securely encased into fuel cells, then removed and decommissioned at the end of the fuel’s life cycle, much like a battery (NRC, 2015c). 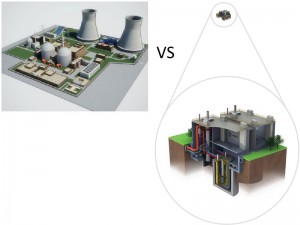 Conventional fossil fuel power plants have led and continue to lead the energy industry throughout much of the world, but there have been movements towards new cleaner energy sources.  An energy source that has been a popular topic for debate is nuclear power because of the danger behind the nuclear processes used.  Although there have been catastrophic failures within this field of energy, due to sensor failures, power surges, and human error, nuclear power plants have not been entirely decommissioned. The public continues to accept the risks this energy source comes with due to the swift changes in standards and designs.  These changes have been the reason why the public accepts the risks in this energy source as an alternative to fossil fuels, and the future of nuclear power looks brighter and brighter as technology continues to move forward.  Nuclear reactors are becoming safer, more efficient, and smaller as technology advances.