There was a dark period in my life when I was vehemently opposed to trying coffee. An avid tea drinker, I was convinced I was getting all the caffeine I would ever need to pull through SATs and four years of college. And then, one day, as I was churning out yet another philosophy term paper, a scene similar to this occurred: click for a video!

What Will Ferrell’s character doesn’t know yet is that he just took his first step towards major caffeine dependence – just like I once did, chased into a corner by a deadline. In fact, this post is brought to you by some dark roast, too. 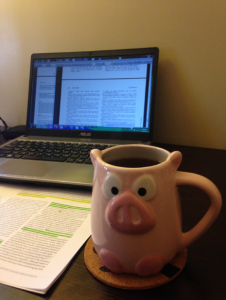 So let’s get some things straight first: caffeine is, indeed, a drug: the most popular psychostimulant drug in the world! More specifically, it is an adenosine receptor antagonist, which means that it slows down the effects of adenosine (which has a rather inhibitory effect on the central nervous system), effectively making caffeine act as a stimulant (you can read more about the exact process here).

Second, caffeine dependence is a real thing. In 1992, Evans and Griffiths showed significant difference between groups of caffeine choosers and non-choosers; for 18 days, the participants were ingesting either regular doses of caffeine at 300mg/day (an equivalent of two tall cups of Americano from Starbucks), or placebo. Regular caffeine consumers reported positive subjective effects when they were placed in the caffeine condition and negative effects when placed in the placebo condition, contrary to the self-reports of non-choosers. And this is just a bit of anecdotal evidence showing that withdrawal from caffeine does occur.

But why should neuroscientists care about this?

Since caffeine is a psychostimulant, its effects are linked to generally increased level of arousal, which in turn produces noticeable effects on mood. Depending on the dose administered, studied effects include an increase in self-rated happiness, well-being, and alertness (Zwyghuizen-Doorenbos et al., 1990), or an increase in anxiety and nervousness (Rush, Sullivan & Griffiths, 1995). About a cup of coffee a day (20 to 200 mg of caffeine) has a positive effect on our mental well-being, while anything above 200mg results in nervousness and jitteriness that only increases in severity with further caffeine consumption (Evans & Griffiths, 1991).

In 1999, Rachel Herz aimed to investigate whether arousal (induced by administration of 5mg/kg of caffeine) had an impact on memory in a simple word recall task (you memorize words under certain conditions, then recall them later; variability in success rates of later recall is associated with the particular conditions under which the memorization occurred). Herz’s results showed no significant relationship between memory and caffeine intake in the end, but the more important conclusion from the study was this: caffeine itself can increase arousal (therefore affecting the mood), but it doesn’t impact the valence of mood. The valence of mood would be affected in a positive way when a habitual drinker had her/his coffee, and in a negative way when such a pleasure was denied.

But here’s the issue: moods and emotions are not synonyms. While both are subjective states, and both have a positive and negative dimension, emotions are instantaneous responses to a particular stimulus that have both psychological and biological components. Moods, on the other hand, can be defined as prolonged states. So the studies above show that caffeine – or lack of thereof for habitual users – plays a role in our mood.

But what about emotions?

A 2012 study conducted by Smith and colleagues investigated whether caffeine had an impact on brain regions implicated in social threat processing and anxiety. While the neural correlates of caffeine-induced anxiety remain unknown, Smith looked at the following brain regions: the amygdala, medial prefrontal cortex, and midbrain structures. The cool thing is that these areas are associated with social threat processing and contain a moderate to high level of adenosine receptors. So Smith hypothesized that caffeine intake should inhibit the reactivity of those regions, therefore inhibiting the social threat processing and anxiety. Participants were looking at angry, fearful, and happy faces during an fMRI session and judging whether they were identical to a probe; caffeine induced midbrain activations (that’s the part responsible for recognizing the threat), but decreased the activity of the amygdala and the medial prefrontal cortex (the parts responsible for emotion regulation and maintaining context-appropriate behavior).

Similar findings were presented by Rogers and colleagues in 2006:  they tested whether caffeine affected the perception of threat. In a simple task, the participants were presented with two words (one threatening and one neutral); one of the words would be then quickly substituted for an arrow, and the participants had to indicate in which direction the arrow was pointed. The results showed that people, in addition to increased self-ratings of anxiety, were more vigilant and attentive towards social threat words (such as “hated” or “lonely”).

So let’s summarize: caffeine itself does not affect our emotions. If you are not a habitual caffeine consumer and have a cup, you are likely going to be aroused, which in turn can make some of your positive emotional responses stronger than usual; but if you have two cups, your arousal and alertness will keep on increasing until you become jittery and anxious, which in turn can increase the negative emotional responses. If you are a habitual coffee consumer, your threshold will be higher: two cups will make you more attentive, and four cups will make you jittery. However, not having any coffee will make you irritable and therefore will affect your emotional responses in a negative way. But it seems like the relationship between caffeine and emotions is moderated by mood, so it’s not a direct relationship!