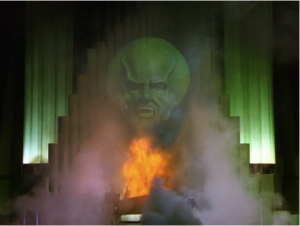 Perhaps a menacing fire is an effective way of conveying anger, but its not very practical tactic for us non-Wizards. Retreived from: http://thefilmspectrum.com/?p=3634

So far we’ve reviewed ways that a face conveys emotion and how this process influences a perceiver. However, outside the psychology laboratory we rarely encounter a face on its own. Unlike the Wizard of Oz, people often use their bodies to convey emotion. For instance, if you are angry, in addition to furrowing your brow and scrunching your lips, you might also take a threatening stance and scrunch up your fists. This way you can avoid the safety hazard that comes with a menacing, Wizardly fire, while still conveying to others that you’re angry. In this post, we’ll explore the ways in which this type of emotional body language (EBL) influences person perception.

A model for perceiving EBL 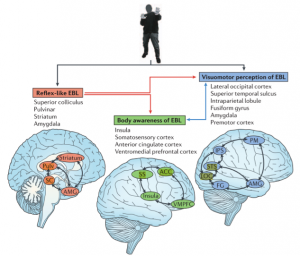 De Gelder (2006) proposes a specialized pathway for perception of EBL, similar to the pathways already established for face perception. Some evidence suggests that parts of the brain, such as the extrastriate body area (EBA) located in the middle occipital gyrus, are used for processing only bodies. However, there is also overlapping brain activation when participants view emotional faces and bodies. For instance, there is some evidence that parts of the superior temporal sulcus (STS) preferentially respond to faces and bodies. De Gelder proposes a two-systems theory for the processing of EBL. The first­­, “reflex-like” system involves the automatic, rapid perception of EBL and resides largely in the subcortical regions. Conversely, the second system governs the more controlled processes involved in the perception of EBL and resides mainly in the cortical regions. These two systems become activated in parallel, and interact in a reciprocal manner via numerous connections. In this way, the EBL influences the way our brain interprets the emotions conveyed in the face, and vice versa. 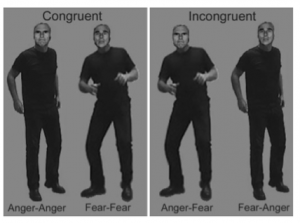 Empirical work has examined the extent to which a perceiver integrates emotional information conveyed through the face and body. Meeren, Heijnsbergen, ad de Gelder (2005) used face-body compound stimuli conveying either a fearful or angry expression, creating two categories of face-body images: congruent or incongruent. Participants were asked to focus their attention on the target’s head and indicate which emotion the face conveyed. Researchers collected electroencephalography (EEG)—or electrical brain activity—data. The results indicated that participants were faster to identify the facial emotion when viewing stimuli in the congruent (versus incongruent) condition. Researchers also looked at the P1 component, a signal of brain activity implicated in the quick, reflex-like processing of faces and emotions. The EEG data suggest that the P1 component is sensitive to incongruent (versus congruent) stimuli. Together, these results suggest that even when a perceiver is not directly attending to all aspects of a target, the bodily emotion the target conveys influences the way in which the perceiver process the face. Incongruent emotional information from the two sources (face and body) appears to hinder a perceiver’s ability to interpret the target’s emotion. Furthermore, the results provide evidence for an early integration of EBL information during the processes of person perception – supporting the first system of de Gelder’s two-systems model.

Similarly, Van den Stock, Vandenbulcke, Sinke, and de Gelder (2014) examined how the brain processes emotionally congruent versus incongruent signals conveyed by the body and background scenes of a picture. Similar to Meeren et. al. (2005), they found that the brain demonstrated differential processing when participants viewed an image in which the body and background displayed congruent (versus incongruent) emotions. Specifically, they found greater activation in the right EBA when participants viewed a neutral body against a threatening (versus neutral) background. These results suggest that the brain may preferentially seek out clarifying information from a person’s body when encountering an ambiguously valenced image. Furthermore, this work highlights the importance of considering the broad context of person perception in order to more accurately reflect real-life encounters.

Hinzman and Kelly (2013) examined the effect of EBL on participants’ perceptions of racial outgroups. They created stimuli pairing White and Black faces with happy or angry EBL and asked White participants to rapidly indicate the race of the person in the picture (Black or White). Results demonstrate that participants were faster to categorize a target as “Black” when it was depicted with angry (compared to happy) body language and were faster to categorize the target as “White” when it was depicted with happy (compared to angry) body language. A similar pattern of results was observed when participants were asked to make these judgments about White and Asian targets, suggesting an implicit association between racial outgroup members and threatening emotions. These results extend the literature by demonstrating the EBL is also rapidly integrated with non-emotional, individuating information about a target (i.e., race).

We have explored literature examining another factor that can influence person perceptions: their bodies. From the literature, we know that EBL can be integrated early in the process and that it interacts with all different types of contextual information. For instance, the emotion conveyed by a person’s face, the nature of the background scene, or the race of a person’s face, have all been shown to interact with the type of body language a target conveys to influence person perception. I hope I have conveyed the importance of examining the broader context within which a person is encountered when considering the processes that guide person perception in order to fully understand the complex processes that contribute to social interactions.