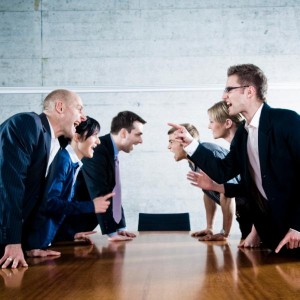 In previous posts I have explored concepts involved in the way that emotions influence a discrete instance of person perception. In this final post I’ll explore the causes and effects that emotions have in real-time interactions. The literature I’ll review specifically investigates the ways in which emotion influences the way a perceiver reacts to people who belong to a different socially constructed group.

Outgroup members engender a threat response in the perceier

Researchers examined the hypothesis that perceivers interacting with socially devalued members would exhibit a greater threat response and poorer performance on a cooperative task (W. B. Mendes, Blascovich, Lickel, & Hunter, 2002). They brought White and Hispanic participants into the lab and assigned them to work with a partner who was actually a confederate of the study. To manipulate social value, researchers manipulated the confederates’ background in two ways: race (Black or White) and socioeconomic status (SES; low or high). There were three phases of the experiment intended to mimic an encounter with a stranger. In the first phase, the participant and the confederate shared background information about themselves. In the second stage the participant was assigned to give a speech for the confederate about working as a member of a team. In the final stage the participant and confederate collaborated to complete a word-finding task, much like the game Boggle. 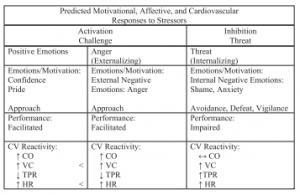 responses (see table on left). A challenge response is an approach-oriented motivational state, characterized by increased cardiac output (CO), increased ventricular contractibility (VC), decreased total peripheral resistance (TRP) and increased heart rate (HR). A challenge state would likely increase a participant’s performance on a task. While similar to a challenge response in some ways, a threat response is uniquely characterized by no change in CO, and an increase in TRP. Furthermore, participants experiencing a threat response would be expected to perform worse on a task.

Using a similar paradigm, researchers also examined whether the racial outgroup status of an interaction partner would influence participants’ motivational responses to social rejection (Wendy Berry Mendes, Major, McCoy, & Blascovich, 2008). White and Black participants where assigned to work with a confederate who was a member of their racial outgroup or ingroup. The participant was instructed to give a short speech about why he or she makes a good friend. Following that speech, the participant received either positive or negative (fake) feedback from the confederate. Throughout the task, researchers collected CV data to determine participants’ motivational states (challenge or threat) throughout the interactions. The results demonstrated that when participants received negative feedback from an ingroup member they exhibited CV responses consistent with threat (lower CO and higher TRP). Conversely, when a participant received negative output from a racial outgroup member they exhibited a CV response consistent with an anger response.

In related work, DeSteno, Dasgupta, Bartlett, and Cajdric (2004), examined whether a person’s emotional state could influence their attitudes towards a member of a minimal group. Social psychologists often use minimal group paradigms to examine the minimal conditions required for participants to exhibit intergroup bias. DeSteno and colleagues (2004) created minimal groups based on a fake “personality test” in which participants were arbitrarily assigned to one of two groups. Therefore, unlike in the previous studies that examined outgroups based on race, these minimal groups have the benefit of being free of any prejudices established through our cultural history. After being assigned to one of two groups, participants were trained with pictures to learn which other people were members of their ingroup and outgroup. Following the training phase, researchers induced the participant to feel either sadness or anger using a free-writing task (i.e., they wrote either about a previous event that had made them sad or angry). Finally, participants completed a task to measure their implicit attitudes toward members of their ingroup and outgroup.

The results of the studies reviewed here are consistent with previous work demonstrating automatic activation in the amygdala – a part of the brain commonly associated with fear – in response to members of a racial outgroup (Phelps et al., 2000). Taken together, these results suggest that this early and automatic activation of the amygdala translates into measureable CV differences and influences participants’ ability to perform simple tasks with a partner, depending on their outgroup status. Furthermore, we might reasonably expect to observe increased amygdala activation not only in response to members of a racial outgroup (associations which are often emotionally charged due to historical and cultural influences) but also with members of a minimal outgroup.

Together, these studies illuminate the role that emotion plays guiding intergroup interactions. It is clear that intergroup interactions are vexed by negative emotions, even below the perceiver’s level of awareness. These findings suggest how difficult it is for perceivers to interact with people who are different from them and underscore the importance of developing better strategies for facilitating positive and productive intergroup contact.