Throughout this series, I have discussed the different situations (both typical and atypical) in which we fail to demonstrate towards others what is often considered a fundamental human experience: empathy. For this last post, I plan to end with a bang and examine what I consider to be the ultimate failure of empathy: the experience of feeling actual pleasure at others’ misfortunes.

I feel as though the act of feeling positive emotions in response to other person’s malaise is perceived as relatively abnormal. There isn’t even a word for the concept in English (or many other languages). The Germans call it ‘Schadenfreude’—literally “harm-joy.” I would argue that this experience isn’t so atypical, though, if you think about it. From rival sports fans to hated politicians, you must admit that you sometimes experience even a bit of pleasure from the misfortunes of whomever these individuals are in your own life.

The origins of Schadenfreude are both affective and social in nature (Smith et al., 2009). One major contributor is an environment of competition (hence, I’m guessing, the joy displayed by the Survivor contestant below). Think about it: if you are in a zero sum situation with another individual or entity, a misfortune for them may represent a beneficial situation for you, and thus, it logically follows that you may experience a bit of pleasure. The affective aspect to Schadenfreude (though quite related to the social aspect of competition) is envy, which stems from perceptions of inferiority. I’ll just say this: I always love when a scandal befalls Georgetown University, whom I despise (as my alma mater is GW), but I will begrudgingly admit that these hostile feelings probably (maybe, possibly) stem from the fact that Georgetown is perceived to be a better school than GW.

Finally, people may feel some pleasure towards another person’s pain simply because they think they deserve it! Often this occurs when there is hypocrisy involved. Let me give you an example: Jimmy Swaggart is a television evangelist known very well for public derision and exposing other people’s sins, especially those sexual in nature.  In 1988, it was revealed, however, that Mr. Swaggart had been regularly visiting prostitutes. Mr. Pot, meet Mr. Kettle. Mr. Swaggart made a very public and very humiliating confession, during which the pain was clearly visible on his face (see below). The media and the public had a field day! And rightly so, in their eyes. 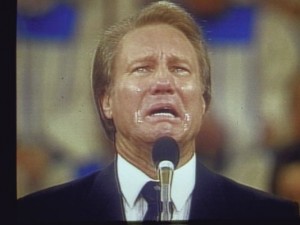 Examining Schadenfreude from a neural perspective has been relatively untouched thus far, yet the investigations that do currently exist paint an interesting picture. As I’ve mentioned several times during this blog series, failures of empathy are often demonstrated neurally by decreased activation of certain brain regions, notably the insula and the anterior cingulate cortex (ACC). These areas are typically engaged not only when people experience pain and sorrow themselves, but also when they observe others in pain and sorrow. Thus, decreased activation of the insula and ACC represents a lack of empathic concern.

While decreased activation of areas such as the insula and the ACC may adequately explain the other failures of empathy I’ve discussed, it is insufficient in defining the neural bases of Schadenfreude. Remember: this failure of empathy is not simply not feeling empathy for another person, an act of omission, but also involves an act of commission, or feeling actual pleasure at another’s pain. Thus, there must be another neural process involved. It is plausible that the reward system of the brain, regions responding to appetitive or pleasurable stimuli, may be at work.

The first neural investigation of Schadenfreude examined just this: Is the pleasure component of Schadenfreude represented neurally by reward system activity? Takahashi et al. (2009) focused on ventral striatum activity, one neural region heavily involved in reward processing. In the study, male participants read scenarios describing three target individuals: 1.) a male target with superior qualities than the participant 2.) a female target with superior qualities, but in domains unimportant to the participant and 3.) a female target with inferior qualities. Participants rated their level of envy of each target. Next, participants read a second set of scenarios in which each of the three targets experienced a misfortune, and indicated their level of pleasure in response to these scenarios. Results showed that ventral striatum activity, representing reward processing, increased only in response to the misfortune of the superior male, an envied target. Additionally, pleasure ratings, a behavioral measure of Schadenfreude, correlated with said ventral activity. Thus, this investigation served as initial evidence that the reward system may indeed be involved in the neural bases of Schadenfreude.

A second study utilized the fertile realm of rival sports fans to further examine the neural correlates of Schadenfreude. Cikara & Fiske (2013) had Red Sox and Yankees fans watch video clips of their favored team, their rival team, and a neutral…unimportant team (ahem, the Orioles) in situations of success (e.g. hitting a homerun) and failure (e.g. making an error on the field). While participants partook in this, the experimenters measured fMRI activity and subjective ratings of pain, pleasure, and anger.

Their fMRI analyses focused on again, the ventral striatum, as well as our old friends, the insula and ACC. Results indicated that high ventral activity occurred while participants watched successes of their favored team, and that pleasures ratings correlated with this activity– a logical result. Importantly, though, high ventral activity was also found when participants watched the failures of their rival team, which was also correlated with pleasure ratings. For ACC and insula activity, higher activity was found when participants watched their favored team fail, which was correlated with pain ratings (again a logical result—remember that these regions are activated both when one feels pain and when one observes others in pain). Importantly, again, high insula and ACC activity was also found when participants watched the successes of their rival team. This represents a related concept to Schadenfreude for which the Germans also have a word impossible to pronouce: Glückschmerz, or pain at another’s success.

Although a great deal more research must be conducted to make more definitive conclusions about the neural bases of Schadenfreude, a clear pattern has emerged via the extant literature. The neural foundation of this concept may very well be the intersection of inactivation of areas typically involved in empathic concern (e.g. insula and ACC), and activation of areas indicating reward processing (e.g. the ventral striatum). I like to conceptualize this pattern via the little angel and devil on the shoulder. Not only is the devil (representing pleasure at others’ pain) present, but the angel (representing empathy) is also not there to counterbalance the impact of the devil.

The proposed neural foundation of Schadenfreude

Thank you for tuning in over these past few weeks! I’ve had fun, and I hope you have as well.