This being my final blog post, I’d like to start off by providing you with an eloquent summary of what I covered in posts 1, 2, and 3. Here it is:

…but seriously. Though it is unclear how acute stressors (like having to give a speech in front of an audience) impact brain structures, the literature has converged on the finding that increased stress hormones after acute stress result in a poorer ability to retrieve memories. And then there’s the whole chronic stress literature, which points to the fact that chronic stress depletes brain regions associated with memory like the hippocampus and PFC. But we all experience stress, right? And some of us (*cough*grad students*cough*) may even feel chronically stressed. So what can we do to reduce our reactions to stress, and hopefully save our brains from its unwanted consequences?

Thankfully this is a question people have been asking for a long time, and researchers and clinicians have come up with some answers. In my final post on the topic of stress and the brain, I’d like to introduce you to the popular mindfulness-based stress reduction (MBSR) technique, discuss its effectiveness at reducing stress, and explain how associated brain changes may contribute to its success.

MBSR is a meditative technique in which people are trained to be open-minded and non-judgmentally aware of their moment-by-moment physiological and psychological experiences (Nyklíček & Kuijpers, 2008). For example, in a stressful situation, a person engaging in MBSR may consciously acknowledge, “my heart is beating fast” instead of thinking, “my heart is racing and that is a really bad sign.” Mindfulness meditation is rooted in the Buddhist belief that psychological distress stems from the tendency for our judgmental minds to label our life experiences as good or bad (Nyklíček & Kuijpers, 2008). According to this philosophy, by eliminating this good/bad labeling via mediation that encourages us to consciously recognize this behavior, MBSR should improve our psychological well being.

During MBSR training, participants typically meet with instructors on a regular basis for eight weeks, and are also expected to engage in mindfulness meditation on their own time at home (e.g., Nyklíček & Kuijpers, 2008). These training techniques have been shown to successfully reduce self-reported stress, depressive symptoms, anxiety, and rumination (for a meta-analysis see Chiesa & Serretti, 2010). MBSR techniques have even been shown to improve people’s overall quality of life, as measured by satisfaction with factors such as physical health, psychological health, and social relationships (Nyklíček & Kuijpers, 2008).

Here’s a summary of what we’ve learned thus far: 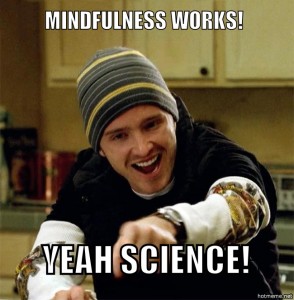 With regard to the neural mechanisms underlying MBSR, both immediate brain changes during MBSR and long-lasting brain changes as a result of chronic MBSR may shed light on why this technique is so effective.

Ives-Deliperi, Solms, and Meintjes (2011) compared fMRI brain activation during resting versus during mindfulness meditation for people who were well-trained in MSBR. They found that, when participants engaged in meditation, they demonstrated decreased activity in the anterior insula, left ventral anterior cingulate cortex, right medial prefrontal cortex, and bilateral precuneus. In case you, like me, are not a neuroscientist, it may be helpful to know that those structures have been roughly implicated in self-referential thought. The authors further supposed that the reduced activity may have been indicative of disidentification, which happens when people temporarily suspend their sense of self, including all habitual thoughts and behaviors. Theoretically, during disidentification, thoughts that enter the mind are registered in the absence of judgment. Though mostly speculative at this point, these findings do provide support for a neural basis for the effectiveness of ongoing MBSR, in the form of reduced activity in brain regions associated with subjective assessments of the self.

Holzel et al. (2010), recruited participants who reported high levels of stress for at least a month to complete an eight-week mindfulness training program. Participants underwent MRI scanning before and after training. At the post-training scan, participants’ subjective reports of reduced stress were correlated with reduced grey matter density in the right basolateral amygdala. Again, in case you’re no neuroscientist, one process that the amygdala is associated with is our automatic emotional response to stimuli. Thus, the authors hypothesized that reduced density in the amygdala indicated that MBSR influenced an individual’s initial reaction to stimuli, perhaps by discouraging individuals from emotionally overreacting.

Okay, so we (and a wealth of literature) can agree that stress is the worst and can really mess with our ability to remember information. But thanks to the MBSR technique, there is hope! Not only have several researchers demonstrated that MBSR is incredibly successful at reducing subjective stress (see Chiesa & Serretti, 2010), but even our brains show evidence of its ability to calm regions associated with self-judgment and emotional reactivity. Moral of the story? Mindfulness works. Yeah science!