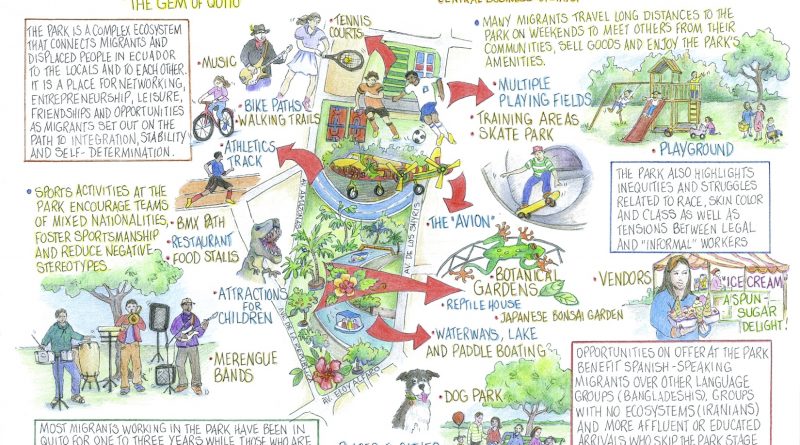 By Madison Chapman, under the supervision of Kim Wilson

Two young Colombian women sit next to a small iron pushcart topped with four heavy, five- gallon tubs of coconut and tamarind juice. A year ago, their farm was raided by the FARC. One narrowly escaped sexual assault and both fled their home to escape retaliation. Here in Parque La Carolina (Quito, Ecuador) they have been selling juice all day. Both wear ragged caps to protect themselves from the fierce mid-afternoon sun. They take a break under the light shade of a scrubby bush and dig into juicy hamburgers from a nearby food stand. All around them other, largely Afro-Colombian women, shout “Coco! Tamarindo!”

A half-mile away, a group of young Ecuadorian and Venezuelan men face off in the final moments of an intense fútbol match. Sweat streams from their foreheads as they call out to compatriots on the sidelines, pumping up the growing crowd. Yet they never take their eyes off the ball for long. They play like something important depends on it. Whether it is only for pride or for something else is unclear.