Symposium on the Rosa Parks House Project this Friday, May 18

Please join RISD and Waterfire Providence for a symposium on the controversial artist intervention on the Rosa Parks House. The day begins with a tour of the project followed by panel discussions about art, preservation, and memory. This project brings up questions of race, artistic appropriation and preservation and should be an important discussion for all. Free. For more information about the symposium, please visit their website. 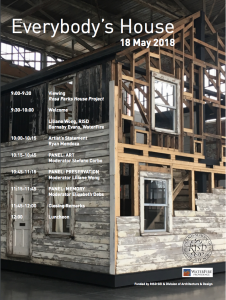 Cell phones are among people’s most prized possessions. They play an important role in daily life, facilitating everything from communications with others to the recording of social experiences and emotions. Despite the importance and ubiquity of cell phones, few people know how these devices are made or what happens to them after they are discarded. Using an anthropological lens, Joshua Bell will discuss the international network of relations that underpins the production, repair, and disposal of cell phones and the emerging social implications of this network at both global and local levels.

This event will be livestreamed on the Harvard Museums of Science & Culture Facebook page. A recording of this program will be available on our YouTube channel approximately three weeks after the lecture.

Since 2015 a committee has been working to plan the commissioning ceremony for the newest destroyer for the US Navy, USS THOMAS HUDNER (DDG 116), an ARLEIGH BURKE-class destroyer that has been under construction at Bath Iron Works since November 2012.

The Ship is named for Captain Thomas J. Hudner, Jr., US Navy (Retired), a former naval aviator and Medal of Honor recipient. Hudner grew up in Fall River, Massachusetts and graduated from the US Naval Academy in 1946. As a Lieutenant (Junior Grade) in December 1950, he attempted to rescue his element leader, Ensign Jesse Brown, the first African American naval combat aviator, who crash landed as a result of enemy fire behind enemy lines near Chosin Reservoir in sub-zero weather. For his selfless action he was awarded the Medal of Honor by President Harry S. Truman in April 1951. Captain Hudner remained in the Navy for another 22 years before retiring in 1973 with the rank of Captain. He went on to work as a management consultant, served as president of the regional USO, and served as the Commissioner of Veteran Services for the Commonwealth of Massachusetts from 1991-1999. As you may have seen in the news last November, Captain Hudner passed away.

The Commissioning Committee is sponsoring the receptions and events around the Commissioning, planning activities for the crew and their families during the week that the Ship is in Boston, and establishing a scholarship fund in Captain Hudner’s memory for the Ship’s crew members and their families. They are also responsible for raising awareness about the commissioning and coordinating the public guest list in collaboration with the Navy.

Requesting an invitation online now is not a commitment to attend the ceremony in December. If you fill out the online form, an invitations will be mailed directly to you by the Department of the Navy in late-summer or early-fall, at which time you can decide whether you would like to attend and respond to request tickets. Please feel free to browse the Commissioning Committee’s website and learn more about Captain Hudner as well as the crew of the Ship and the Committee’s plans and efforts in support of the Ship.

Historic New England presents Preserving Affordability, Affording Preservation: Prospects for Historic Multi-Family Housing on Friday, April 27, 2018, at the All Saints’ Church in Boston. The conference gathers leading advocates in affordable housing and historic preservation to look at the past, present, and future of our region’s historic multi-family housing.

Historic multi-family buildings, such as New England’s iconic three-deckers, once served as “gateway” housing, providing affordable options for renters and a path to home ownership. Can these historically affordable buildings be adapted to meet current needs? Can we preserve affordability while also preserving historic buildings, neighborhood character, and urban density?

Presentations include scholars and practitioners in urban planning, historic preservation, architecture, and politics. The conference explores how cities can approach preserving historic character while balancing sustainability, affordability, and diversity.

Join us for this conversation that brings together voices from historic preservation and affordable housing to consider historic multi-family housing and its place in our communities. See a complete list of speakers and an agenda.

Register online or by calling 617-994-6678. The registration fee is $85 for adults and $35 for students with ID. Fees include a continental breakfast, lunch, and reception.