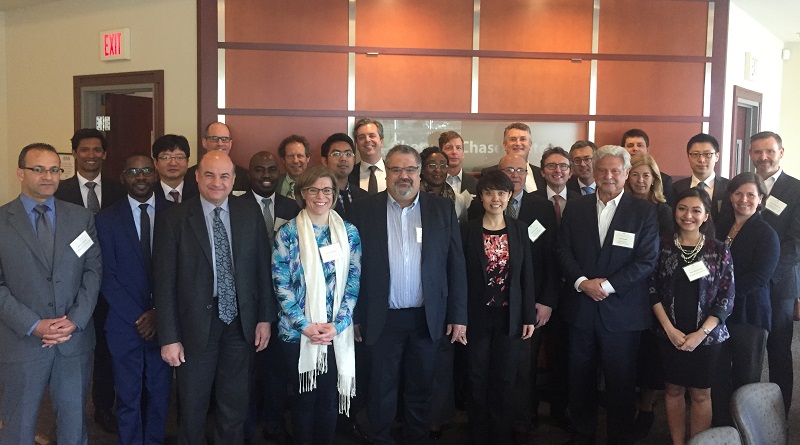 On 24 and 25 May 2017, SovereigNET at the Fletcher School of Law and Diplomacy hosted a member workshop of the International Forum of Sovereign Wealth Funds (IFSWF). The workshop – Beyond the Market: Reframing Risk in a Dynamic New World – focused on risks and opportunities to long-term investors that extend beyond the immediacy of markets and prices. Twenty investors attended the workshop, including 16 IFSWF members, along with Fletcher faculty and invited guests. Participants engaged in spirited dialogue on a variety of themes, including cybersecurity, climate change, operational risk, political risk and the role of populism, legal and regulatory risks to foreign investment, and the unique challenges of managing risks of direct investments and private equity.

The program was organized as a series of roundtable “conversations” facilitated by IFSWF members, Fletcher faculty, and expert practitioners. The first day closed with a member panel session moderated by Sarah Williamson, CEO of Focusing Capital on the Long Term (FCLT), that was open to invited guests.

The workshop was launched by Admiral James Stavridis, Dean of the Fletcher School, who extended his personal welcome and kicked-off the dialogue, offering for discussion three major risks to global security: cyber-security, the re-emergence of “big power” politics, and the persistent geopolitical fissures that remain in the Middle East. Referring to these as “Black Elephants”, Admiral Stavridis also offered a genuine “Black Swan”: a global pandemic that could undermine global security through threats to large vulnerable populations.

The workshop was held just prior to the announcement by the US government of its intention to withdraw from the Paris Climate Agreement. In closing the Dean cautioned that climate would vault to the top of any list of global risks should the US decide to withdraw from the accord.

Cyber Risk: From the Computer Room to the Board Room

Participants acknowledged a range of constraints to their ability to effectively manage cyber risks including scale, costs and tools prescribed by and for government agencies more generally. Governance issues focused on the critical need for executive sponsorship for advanced cyber security measures at board level, including effective monitoring and prompt and clear communications focused on the institutional risks posed by cyber threats.

Participants widely agreed that cyber threats – including those to portfolio companies – pose a significant reputational risk to funds which require both ex-ante and ex-post mitigation, such as extensive training, effectively building cyber threats into risk assessment models, and establishing robust business continuity procedures to ensure interrupted systems are restored promptly.

The Paris Climate Agreement – ratified in 2016 – is based on pledges by 175 countries to limit greenhouse gas emissions. Participants acknowledged that its agenda is aspirational and its success depends on both the participation of its signatories and the effectiveness of their approaches to implementation. These included measures – such as carbon pricing and taxes – and their effects on the level of atmospheric greenhouse gases, but also measure to adapt economies to become more resilient to climate change.

Policy risk results from overlapping or shifting regulations and potentially complicates investor decisions that are sensitive climate issues. Climate risks to existing investments – particularly illiquid holdings – can be challenging to mitigate due to difficulties estimating cost impacts and investments in climate resilience across geographies. The assets of SWFs from resource-dependent economies with funded by natural resource revenues will be discretely affected over the long-term subject to the pace of change systematically from fossil fuels to renewables. Finally, potential political risks loomed due to the US withdrawing from the Paris Agreement, as well as not honoring its bilateral climate agreement with China.

Among participants, operational risk was widely acknowledged to be uncompensated, difficult to quantify, challenging to mitigate or hedge, and ultimately resulting in financial losses, as well as reputational damage.

Operational risks are embedded in the processes of individual units, and due to their nature are often overlooked by audit processes. In the case of direct investments, they also extend to the processes and business practices of portfolio companies. Participants discussed the role of centralized oversight and leadership in operational risk management, as well as the need for decentralized controls, oversight, and responsibility by those with the technical capacity to identify and assess risks to processes and delivery functions.

Participants engaged in an interesting dialogue over the role of building an effective operational culture to enhance risk awareness throughout their organizations. They discussed several barriers to effective risk awareness including complacency, assignment of routine and mundane tasks, as well as inadequate training about the upstream and downstream implications of processes or functions.

The effects of new technology on operational risk was also considered. For example, in institutional cultures characterized by bureaucracy, policies and procedures may adapt more slowly to changes in technology and business practices.

Focusing Capital on the Long Term: An Open Session Hosted by K&L Gates and the CFA Society of Boston

This evening session, moderated by Sarah Williamson of FCLT, was sponsored and hosted by K&L Gates and co-hosted by the CFA Society of Boston. It included representatives of the Alaska Permanent Fund, Singapore’s GIC, and the New Zealand Superannuation Fund. Each of the three funds discussed their investment strategy in the context of their long-term investment horizons.

GIC highlighted that its long-term focus is rooted in its benchmarking to an annually reported 20-year rolling return. GIC’s management dialogues frequently with its clients – the Singaporean government and the Monetary Authority of Singapore – concerning execution of its long-term strategy. As its investment mandate is unconstrained by liabilities linked to the national budget, GIC has the flexibility to pursue private-market and alternative investments that can enhance its ability to earn illiquidity premia. The fund’s investment interests include disruptive technologies that impact economic behavior in the long term.

The Alaska Permanent Fund (APFC) discussed its commitment to long-term performance through its mandated targets: long term (CPI +5%), medium term (relative to peers), and one year (value at risk). For APFC, illiquidity premia also offer a potential source of enhanced performance. APFC monitors investments for market-price mismatches and for innovative opportunities with long horizons, such as in new infrastructure for smart cities. Looking forward APFC anticipates increasing its allocation to high-growth markets, including those in Africa, whose demographics and development prospects offer long-term growth potential.

For the New Zealand Superannuation Fund (NZSF) a key element of its investment program is the flexibility to design and execute strategies it can effectively pursue as a long-term investor. Accordingly, it evaluates opportunities based on an investment horizon with the objective to deliver consistently strong returns. The fund uses a reference portfolio against which it manages its actual portfolio, not by asset class, but rather holistically, encouraging its investment team to focus on the overall performance of the portfolio, to which their remuneration is linked. NZSF anticipates it will grow its active portfolio with a greater focus on key themes, such as climate change.

The “End of Politics”: How Populism May Change the World

Day 2 opened with a discussion of the impacts of political risk to SWFs, focused through the lens of populism and its opposition to both elites – including countervailing sources of power – and pluralism. Participants discussed common perceptions of populists as believing that a nation can have a single driving will, rather than viewing a country as consisting of divergent sets of interests and preferences.

The discussion focused on sources of economic risks arising from populist politics as potentially more consequential than geopolitical factors. Specifically, barriers to cross-border investment – a persistent challenge for SWFs – are expected to be accentuated as populist influences increase protectionist pressures, including those related to capital movements.

Considerable discussion focused on the effects of populism in the US and its possible implications for foreign investment, specifically those resulting from public opposition to foreign control of US companies. SWFs are vulnerable to reputational risk: not attributable to what they actually do, but rather what they are perceived to be doing. Participants discussed investors responses to such sentiments, including slowing acquisitions and avoiding controlling interests in US corporations.

Globally, financial crises, widening income inequality, and migration have fueled the populist backlash to globalization, resulting in both economic and security disruptions, which have thus far been limited to high- and middle-income countries.

Managing Risk in Private Equity: What Is Different?

Is risk management for direct investments and private assets different than portfolio risk management generally? Facilitators for this session presented a strong case that managing the risks of private assets is complex and must be integrated into the broader governance framework of institutions. In private equity specifically, risks arise at the deal level, the portfolio level, but also – when “outsourced” – at the manager level. Consequently, discrete risks include illiquidity, lack of transparency, economic risk, financial risk, as well as idiosyncratic or company-specific risk. Importantly, at the portfolio company level, this also extends to operational risk.

In cases of direct investment, several models were discussed including a “top-down” framework in which the risk management function is integrated into the investment review process ex-ante, then later is tasked with on-going risk monitoring across a variety of key risk factors: liquidity and exit risk, concentration risk, credit risk, interest rate risk, regulatory risk, technology risk, etc.

Participants noted accelerating trends to “insource” direct investments to drive higher net of fee returns and encourage a greater alignment of interests between asset owner and third-party managers. Yet they also acknowledged that sovereign investors often lack the capacity to manage all strategies in-house. Integrated solutions include specializing to build expertise in niche sectors, while selectively outsourcing. Such hybrid structures can pose discrete organizational and governance risks which should be carefully assessed in advance of implementing in-sourcing strategies.

New Barriers to Cross-Border Investment: What Does It Mean for Regulatory Risk Management?

In this session, participants revisited issues and concerns raised in earlier discussions on populism, namely risks that SWFs face as foreign investors primarily in developed markets. The analytical focus began with the US and specifically, the institutional role of The Committee on Foreign Investment in the United States (CFIUS).

Several participants discussed their experiences investing in the US and the discrete risks posed by the review process: time-consuming – subject to country of domicile – and costly financially and reputationally if they impede an investor’s ability to close deals within defined timeframes. Costs to mitigate such regulatory risks include “reverse breakup fees” (increasingly required by counter-parties) and possibly even partial divestiture of acquired assets that might substantially change the nature and return structure of the original investment.

As recourse is generally beyond the reach of investors, experienced participants prescribed working proactively with CFIUS, including increasing the Committee’s awareness of SWFs as commercial investors. Nonetheless, an earlier point was reiterated: When SWFs invest in the US they are fully conscious of issues of ownership vs control and circumspect about the size of the position they take, often eschewing majority control.

While similar issues arise in the EU, for European investors within the EU, regulatory barriers are far less problematic. However, despite being a single market for financial services more work is required toward common regulation and supervision.

To close the workshop and pull together the two-days of rich dialogue, participants engaged in a collective “thought experiment”: to anticipate the cover of the Economist in 2030. Designed as a long-term trend analysis, the session was facilitated by Dean Bhaskar Chakravorti who guided participants to project risk factors that could inform portfolio risks and investment decisions over a 15-year horizon. “Risk-themes” were presented and analyzed systematically across several dimensions: economic, political, social, technological, ethical. Three key themes emerged as possible candidates for a 2030 Economist cover. These were the evolution and the expanded role of artificial intelligence, bio threats from “super bugs”, that defy the reach of current technologies, and the scope and pace of global digital evolution and the expanding role of disruptive technologies.