A few weeks ago, as I was complaining to a friend of mine about the tremendous amount of work I had at the time, he told me, half-jokingly, to “man up”. We are all familiar with this expression and the stereotype upon which it’s based. According to this stereotype, a “real man” isn’t supposed to be psychologically weak or emotionally sensitive. This got me thinking: Is there any empirical evidence that supports the idea that women are perhaps
more in touch with their emotions, and if so, are these differences reflected in memory differences for emotionally salient stimuli? Not only does the literature suggest differences in emotional memory between men and women, but neural activation during retrieval processes seems to be different as well, suggesting that perhaps men and women don’t necessarily rely on the same neural pathways when it comes to emotional memory. 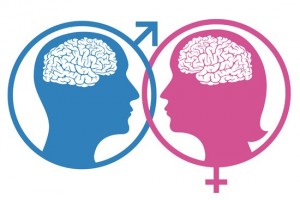 Canli et al. (2002) examined memory for a series of neutral and highly negative pictures after a three-week delay in a sample of men and women. Participants also rated the pictures prior to the memory task to provide their subjective evaluation of how emotionally arousing they were (on a scale of 1, calm/dull, to 9, most arousing or intense). Interestingly, women on average rated more pictures as highly arousing than men did and had better recall for emotionally arousing pictures than men did after the delay. Because this sex difference in memory was not observed for neutral pictures, it seems the superior performance by women was due specifically to the emotionally arousing nature of the pictures. Other studies have demonstrated that in a free recall task where participants were asked to recall their strongest and most emotional positive and negative memories from the last year within an allotted timeframe, women tend to report both more positive and negative memories. (Fujita et al, 1991), (Seidlitz & Diener, 1998). This finding is in line with the stereotype of women being more “in touch” with their feelings and emotions.

Sex differences in neural activity during emotionally salient memory processes may shed some light on why women seem to show have better emotional memory. Numerous studies have found differences in hemispheric lateralization of amygdala function in emotional memory. As discussed in my last blog post, the amygdala plays a selective role in hippocampal-dependent consolidation and retrieval of emotional memory. In the study described earlier (Canli et al., 2002), researchers found that recognition accuracy for maximally arousing pictures—but not for less arousing or neutral pictures—was correlated with greater left amygdala activation in women but not men. In men, greater recognition accuracy for arousing information was correlated with greater activation of the right amygdala activation. Cahill et al. (2004) also found relatively greater activation of the right amygdala in men and left amygdala activation in women and memory for emotionally arousing information. 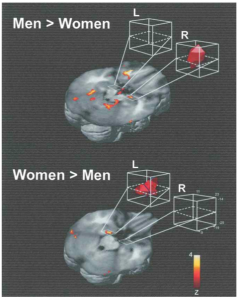 Mackiewicz et al. (2006) built off these findings and found that lateral activation differences between men and women were only observed in the ventral amygdala, while no lateralized difference was observed in the dorsal amygdala. Furthermore, Cahill et al. (2004) demonstrated that this lateralization was observed not just in the amygdala, but other brain regions as well. Among women, all significant activations associated with emotional memory were located in the left hemisphere, including the left posterior cingulate, left middle temporal gyrus, and left inferior parietal cortex. Conversely, neural activation in men was generally found in the right hemisphere in similar structures.

It may be that sex differences in lateralized amygdala activity and the other regions suggested by Cahill et al. (2004) indicate corresponding sex differences in the processing of emotionally salient information. Significant evidence points to a bias of the right hemisphere (favored in male brains in emotional memory) in processing global information, such as general stimulus characteristics, and how the stimulus fits into the greater environment around it. Conversely, research points to a bias of the left hemisphere (favored in female brains in emotional memory) in the processing of local, fine-detailed aspects of the stimulus (Cahill et al, 2004).

While neither one of these strategies is inherently better than the other and the effectiveness of each is likely dependent on context and what is trying to be remembered, it suggests that women may hone in on the more detail-heavy aspects of emotional stimuli, which in turn somehow gives them an advantage in emotional memory. Other possible explanations have been proposed as well. Canli et al. (2004) suggested that women showed better memory than men for emotional events not necessarily because of different neural pathways employed, but because they had more total brain regions activated by subjective emotional experiences and by the encoding of these experiences into memory. Simply put—more activation in more places may simply indicate more encoding.

The clear sex differences in lateralization of amygdala activity are likely related to the findings discussed here that suggest women have better memory for emotional events than men, although the nature of this relationship is not completely understood. More research should explore and attempt to identify possible differences in encoding and retrieval strategies of emotionally salient information between men and women. Doing so may shed more light on the reasons for these sex differences in hemispheric lateralization in the amygdala and other brain regions and why women tend to have better memory for emotionally salient events.

Mackiewicz, K., Sarinopoulos, I., Cleven, K., Nitschke, J. (2006). The effect of anticipation and the specificity of sex differences for amygdala and hippocampus function in emotional memory. Proceedings of the National Academy of the Sciences, 103, 14200-14205.