I’ve always believed that my memory is better when I’m relaxed versus when I’m stressed, and it seems like most people agree. There are, of course, people who absolutely thrive under stress. They probably just have superior emotion regulation strategies or something, but I like to think that they are sociopaths. Anyhow, I’ve digressed. We have this intuitive sense that stress impairs memory performance, and it’s not groundless. When we retrieve memories post-stress, research would suggest that we do demonstrate substandard memory performance (see Wolf, 2009). However, the story is not that simple. Brand spanking new stress research has shown that the different phases of the stress response that I talked about in post #1 can have TOTALLY DIFFERENT effects on memory… 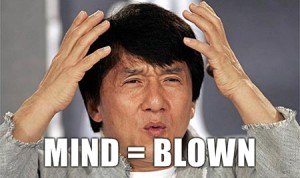 …and it’s all about timing. So let’s discuss the brain’s temporally dependent response to stress. Then I’ll tell you how acute stress affects the three main stages of memory storage and retrieval, and why the past twenty years of stress research may be misguided.

First, let’s talk about the brain. Regions that are typically implicated in stress and memory research are the hippocampus, the amygdala, and the pre-frontal cortex (PFC). To over-simplify, all three of these brain areas are involved in the formation and retrieval of memories, with the amygdala playing a special role in memory for emotional material. It has been generally understood that the release of norepinephrine and cortisol during a stress response facilitates amygdala functioning, but disrupts functioning in the hippocampus and parts of the PFC (Schwabe, Joëls, Roozendaal, Wolf, & Oitzl, 2012). The hippocampus and PFC are particularly receptive to cortisol, so large amounts of cortisol released into the blood stream seem to “gum up” these areas and impede functioning. Only recently researchers have shown that the immediate autonomic stress response may actually benefit memory, whereas the delayed cortisol response disrupts memory. In particular, Schönfeld, Ackermann, and Schwabe (2014) found that stressed participants demonstrated better immediate and poorer delayed memory for negative words and pictures than a non-stressed control group.

Evolutionarily speaking, would it really make sense for our memories to shut down when we are under stress? This could have serious negative consequences. Instead, the autonomic stress response may facilitate neural processing to allow for quick and efficient thinking in a “fight, flee, or freeze” situation (Schonfeld et al., 2014). The delayed cortisol response provides us with energy to deal with the stressor, but unfortunately has some negative side effects.

Okay, enough about the brain for now #saidnoneuroscientistever. Let’s talk about memory. In the stress and memory literature, we often see mixed findings: sometimes memory is better under stress, and sometimes it’s worse. To elaborate on this, let’s look at how stress affects each of the three distinct phases of memory: encoding, consolidation, and retrieval.

In order to remember, we have to first learn, or encode, information. Stress during encoding can result in better or worse memory, often depending on whether the material we are trying to remember is valenced or neutral (see Schwabe et al., 2012 for a review). For example, Payne et al. (2007) had half of their participants complete the TSST (see post #1 for an explanation) before studying neutral or unpleasant pictures and stories. A week later, stressed participants demonstrated better memory for emotional material and worse memory for neutral material than a non-stressed group. As I mentioned, amygdallic activity is enhanced during stress. This may account for why emotional, but not neutral, information was well-learned during stress.

Consolidation is the memory phase immediately following encoding and prior to retrieval. During this phase, the growth of a distinct neural pathway helps solidify the encoded information in the brain. When stress occurs during consolidation, memory is often enhanced. For example, Yonelinas et al. (2011) had participants learn negative and neutral pictures, either go skydiving (yes, SKYDIVING) or stay on the ground, and then gave all participants a memory test. They found that men who went skydiving had better memory for the neutral pictures than all other participants. But why is consolidation better under stress? This is tough to answer. The methodology used in these studies typically involves participants learning information, performing some stress-inducing task, and then taking a memory test hours or even days later. Thus, it’s impossible to tell whether the immediate stress response, delayed stress response, or some other unknown post-stress mechanism is responsible for these findings.

Finally, if all goes well during encoding and consolidation, you can attempt to retrieve a memory by accessing the neural trace that your brain strengthened for you during consolidation. In general, stress during retrieval results in poor memory performance (see Schwabe et al., 2012). But as I mentioned earlier, Schönfeld et al. (2014) showed that the negative effects of stress on retrieval are only observed once cortisol levels have risen in response to the stressor. This is probably because higher cortisol levels are associated with reduced hippocampal functioning. My guess is that the consensus that stress impairs retrieval has been fueled by studies that measured memory performance 15+ minutes after the onset of stress, once cortisol levels were elevated. The findings regarding how stress affects encoding and consolidation may be subject to the same criticism. That is, all studies over the past 20 or so years that investigated the effects of stress on memory may have only been seeing half of the picture: the effects of the delayed stress response on memory.

In conclusion, the way that stress affects memory is clearly dependent on timing: it depends on when stress is present during the three stages of memory, and whether a given stage is being affected by the immediate or delayed stress response. The finding that the stages of the stress response differentially affect memory is new, and calls into question the methodology used in acute stress research over the last 20 years.