In this blog we’ve explored neural function during different stages of the sexual cycle: arousal and orgasm. Now we’ve reached the more mysterious and less-studied part of the cycle: post-coital resolution.

When we think about sex, we think about the approaching, the act, the fireworks of climax… and then we usually stop there. Makes sense,  the sexual act in itself is over, right? However, many changes keep happening within us after we’ve rolled over and gone to sleep.

As we saw last time, when we orgasm our brain becomes flooded with dopamine in our reward pathways of in the limbic system. This feels so intensely pleasurable that it looks just like a heroin rush to the brain, producing intense feelings of well-being (Holstege et al., 2003). But the story doesn’t end there. Because orgasm activates reward pathways much in the same way as drugs, it can also produce similar experience of addiction and withdrawal. In fact, people that are treated for sex addictions tend to have other comorbid addictions, suggesting that they have addictive personalities, an inclination for overactivation in this part of the brain (Hartman et al., 2012). This is because after the rush of orgasm, dopamine levels drop below baseline, similar to what happens during withdrawal from drugs of abuse. Low dopamine levels are associated with depression, low energy, lack of ambition, social anxiety, among others (Dailly et al., 2004). 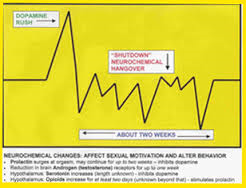 Why does dopamine drop? Well, to make sure we attend to other aspects of our life, our brains come hardwired with a neurochemical mechanism of satiety. Prolactin, another hormone, surges right after orgasm, and is considered a reliable marker of such (Kruger et al., 2003).Prolactin works as a dopamine inhibitor, curtailing our sex drives once we consummate orgasm and providing us with feelings of satiation and sexual gratification. So the happy feelings impulsed by orgasm are carried along by prolactin. These secretions are relatively long-lasting after orgasm (Kruger et al., 2012). 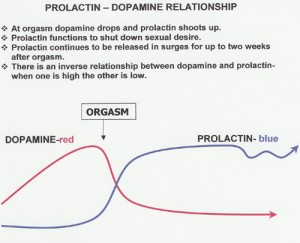 Orgasm also reduces androgen receptor density in the Medial Preoptic Area part of the reward circuit. Androgens regulate sexual desire by activating dopamine levels in this area, so their decreased activity could be another source of the dopamine drop (Putnam et al., 2001). While postcoital neuroendocrine changes are better documented, there is also data on postorgasm brain activation. For example, one neuroimaging study conducted immediately after orgasm in men showed activation in the amygdala, temporal lobe, and septal areas (Mallick et al., 2007).  Case studies have documented hypersexuality in patients with lesions in all three of these areas, reinforcing the inhibitory evidence of what is known as the post-orgasm refractory period (Mallick et al., 2007).

This shows that the sexual cycle isn’t over when the fireworks die out. Neuroendocrine changes in our bodies orchestrate a coordinated dance to make sure that we feel content, wind down, and rest or go on with a lives for a bit. Dopamine dips from its orgasmic high and prolactin and androgen step in to produce feelings of satiety, pleasantness, and to make us want to take a break. At least for a while.

Olds, J., & Milner, P. (1954).Positive reinforcement produced by electrical stimulation of the septal area and other regions of rat brain. Journal of Comparative and Physiological Psychology, 47, 419—427.