As I demonstrated in my previous post, by now, there is a wealth of research that demonstrates that attentional biases toward threat exist in SAD; however the mechanisms comprising the biases remain unclear. So we know that it happens, and we know that on a neural basis, people with SAD differ from healthy controls in this respect, but we don’t yet know exactly why.

In an attempt to uncover one of the many underlying mechanisms of increased brain activity in response to threatening faces, Burklund, Eisenberger, and Lieberman (2007) showed brief video clips of facial expressions depicting disapproval, anger, and disgust to people who were either high or low on rejection sensitivity (note that these were healthy participants). The specific facial expression they were interested in was that of disapproval, which they explained is an indication of negative evaluation – “a signal that the target has done or said something socially undesirable and, consequently, has potentially damaged a social connection” (p. 239) – a concept highly relevant to SAD. They collected fMRI data from participants as they viewed these expressions. Their results indicated that individuals high in rejection sensitivity exhibited greater dorsal anterior cingulate cortex (dACC) activity in response to watching the disapproving video clip than those with low rejection sensitivity. Importantly, this relationship did not emerge in response to anger or disgust faces. 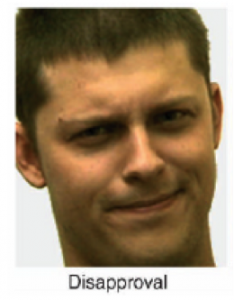 This is an example of a disapproving expression from Burklund et al.’s study.

Another closely related construct to SAD is fear of negative evaluation. In fact, many researchers and clinicians would argue that this lies in the core of SAD. To examine how this psychological process contributes to threat-relevant attentional biases in SAD, Rossignol, Campanella, Bissot, and Philippot (2013) showed neutral or emotional faces (anger, fear, disgust, or happiness) to participants low and high in fear of negative evaluation while examining their brain’s event-related potentials (ERPs). Their results showed that higher fear of negative evaluation led to modulations of different stages of cognitive processing of information, indicating that this construct underlies attention biases to threatening faces.

Other underlying cognitive mechanisms that explain attentional biases to threatening faces in SAD are bound to exist. Here, I focused on only two studies that examined two such mechanisms: rejection sensitivity and fear of negative evaluation. It is intuitive why these two would be closely related to attentional biases to threatening faces: when we reject or negatively evaluate someone, this is often clearly visible in our facial expressions. It thus makes sense that those who are especially worried about rejection or negative evaluation by others, namely those with SAD, would seek out such cues in their environment (facilitated attention), linger on them (difficulty of disengagement) and subsequently avoid such situations (attentional avoidance). Now that we have explored threat-relevant attentional biases in SAD in a little bit more depth, in my next and final blog post, I will outline some exciting research on treatments that were developed to specifically target this process.