Multitasking doesn’t always work so well for me – there is a finite amount of resources my brain can dedicate to working on a problem (and your brain has its limits too!). This is a phenomenon known as cognitive capacity (Van Gerven, Paas, van Merriënboer, Hendriks, & Schmidt, 2003). The total amount of your mental effort is called cognitive load; for example, my statistics homework imposes a high cognitive load on my working memory, while watching reruns of Gilmore Girls for the tenth time will likely result in low (maybe moderate during particularly fast dialogues) cognitive load. Could I be too busy to actually experience emotions?

Kron, Schul, Cohen, and Hassin (2010) argue that experiencing emotion, just like mathematical skills I employ to solve my statistics homework, is a mental phenomenon that requires mental resources. And since my brain’s resources are limited, my experience of emotion will have to compete for them with my current cognitive load. The conclusion should be simple: the harder I work on my homework, the fewer emotions I will feel. Kron and colleagues call that the mere resource hypothesis: any additional demand for my brain’s resources will reduce my conscious feelings and emotions.

While the mere resource hypothesis makes intuitive sense, there is a possibility that my emotional experiences are reduced not because I am too busy to process an affective stimulus, but because I am too busy to actually notice it. Van Dillen, Heslenfed, and Koole (2009) addressed this concern in their fMRI study on how cognitive load impacts the processing of affective images. They wanted to be sure that their participants saw the affective stimulus and processed it (so that the emotion was elicited correctly), and then see if cognitive load affected further experiencing of the emotion. Their participants looked at a picture (either negative or neutral), then judged whether a mathematical equation was solved correctly, and then provided a subjective rating of how they were feeling. Van Dillen and colleagues found that exposure to negative stimuli led to an increased activation of emotional regions of the brain (the amygdalae and the right insula) – the participants got upset. But then the mathematical equation led to an increased activation of the cognitive regions (right dorsolateral frontal cortex and right superior parietal cortex) – the participants were solving the problem. Now the cool part is that higher activation of the cognitive regions resulted in a decrease in activation of the emotional regions. Increased cognitive load led to reduced experiencing of emotions. To make things even cooler, high cognitive load correlated with lower subjective ratings of negative emotions. So it worked!

Ochsner and Gross (2005) suggest that one way of dealing with negative emotions is by controlling the amount of attentional resources devoted to processing negative information (the more I focus on other things, the less brainpower I have to deal with negative stimuli). They review previous research in to see how paying less attention to negative stimuli could modulate the activity of amygdala (which is crucial for emotion processing). But the studies focusing on amygdala and attention control differ in conclusions: some state that amygdala activation decreases during tasks requiring active responses to negative stimuli (such as judging facial expressions as angry or happy), while others state that studies that required participants to judge the non-emotional aspects of emotional stimuli (such as the gender of an angry person) produced contrary results. Ochsner and Gross hypothesize that the necessity to judge a stimulus imposes cognitive load, therefore modulating amygdala’s responses – and it’s generally harder to judge someone’s emotion versus gender.

Berggen, Richards, Taylor, and Derakshan (2013) used eye tracking to investigate how cognitive load modulated attention itself. First, the participants (a group of rather anxious individuals) focused on a cross in the middle of the computer screen, and then a face with one of the three facial expressions (happy, sad, neutral) popped up in the periphery. The participants had to either look at the face as fast as possible, or look in the opposite direction to where the face has appeared without even looking at the face – all of that while listening to auditory tones (which imposed either low or high load). They compared speed of saccades to speed of antisaccades and concluded that… now hold on a second, what in the world are saccades and antisaccades?

Human eye moves in little bursts – saccades – and then stays fixated on the target we want to look at. Saccadic movements are largely automatic – I choose what I look at, but not how my eye gets there. An antisaccade happens when my eye starts moving towards one object, and then halfway through realizes that that’s not the thing I want to look at. It looks more or less like this: 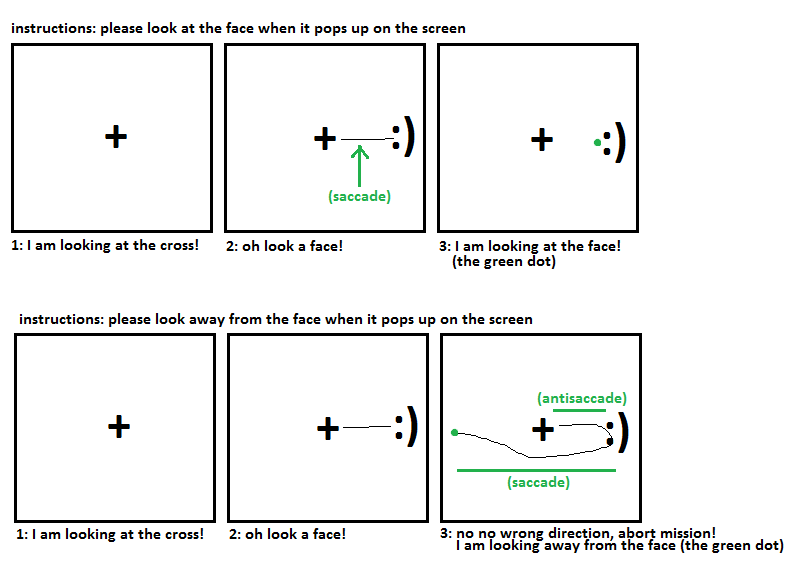 can you tell why I did not decide to become a visual artist?

So: Berggen and colleagues found that participants in the “look at the face” condition looked at the faces with the same speed regardless of cognitive load or emotional expression. But the antisaccades in the “don’t look at the face” condition were much slower under high load than under low load: it took longer to look away from a face when a person was busy. It took even longer to look away from a negative face than a positive face. As Berggen and colleagues were working with highly anxious participants, they concluded that anxious people are particularly vulnerable to losing control of their attention under high cognitive load, which could be one of the causes (or symptoms) of their anxiety.

It seems that cognitive load is “overriding” our experiencing of emotion; however the studies presented here focus on general “negative” and “positive” affect. But what about fear – if fear serves an adaptive purpose, can we assume that a frightening stimulus would “override” whatever important task we were working on at the moment? And what does that (hypothetical in the context of this post) ability of certain emotions to override cognitive load, versus be overridden by cognitive load, tell us about defining and categorizing emotion within affective neuroscience research?

1 thought on “Can you think so hard you forget to feel?”