To welcome the new academic year: let’s vote! To start the year: are food choices predictable?

Jobs in agriculture and the food system

It’s the first weekend of January — which means the start of job-search season for many 2019 graduates.  I recently looked at U.S. employment trends in agriculture and the food system, and here’s what I found:

1. There are many farms, but few farm jobs
The USDA counts about 2 million farms in the U.S., almost all of which are still owner-operated family enterprises.  Farming is the backbone of any food system.  It requires a huge amount of management skill, but not a lot of time:  the last big survey of labor use on U.S. farms found that they took an average of 3,250 hours per year to run, with family members still doing most of the work as shown for example in Table 4 of this report.

The few jobs in farming that do exist are often seasonal, and they are highly spatially concentrated with limited growth potential.  The chart below summarizes the overall employment data from successive waves of farm labor surveys in the 1990s and 2000s. The only category with continuous measurement are “directly hired” workers, which declined in the 2000s and has not increased since the 2008 recession. 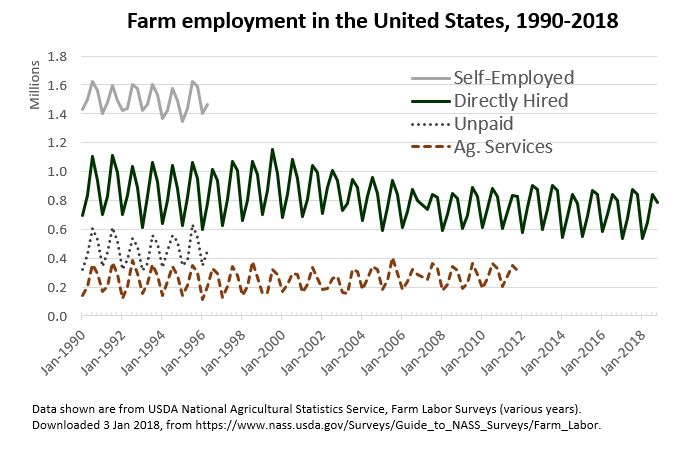 2. Farms provide food, but post-harvest handling provides employment
New employment opportunities in the food sector arise primarily off the farm.  Food manufacturing alone provides about twice as many jobs as farming, and grew significantly from its post-recession bottom of 1.4 million jobs in January 2010 to an all-time high of almost 1.7 million jobs in July 2018.

Data on non-farm jobs are collected by the Bureau of Labor Statistics, Current Employment Surveys.  The chart below compares total employment on farms with the number of jobs classified as food manufacturing, from January 2008 through October 2018 to show post-recession growth in food manufacturing. 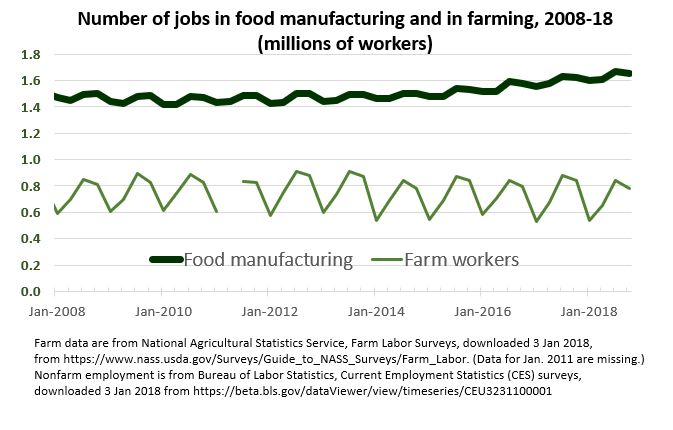 3. The biggest source of new jobs is food away from home
By far the fastest growth in new jobs is in food and beverage service provision, for food away from home. Using longer-term Current Employment Survey data allows us to compare the three main kinds of off-farm jobs in the food system:  food manufacturing, food and beverage stores, and food services and drinking places.  The chart below compares these three employment categories to on-farm employment, over the entire time period for which this kind of jobs data is available. 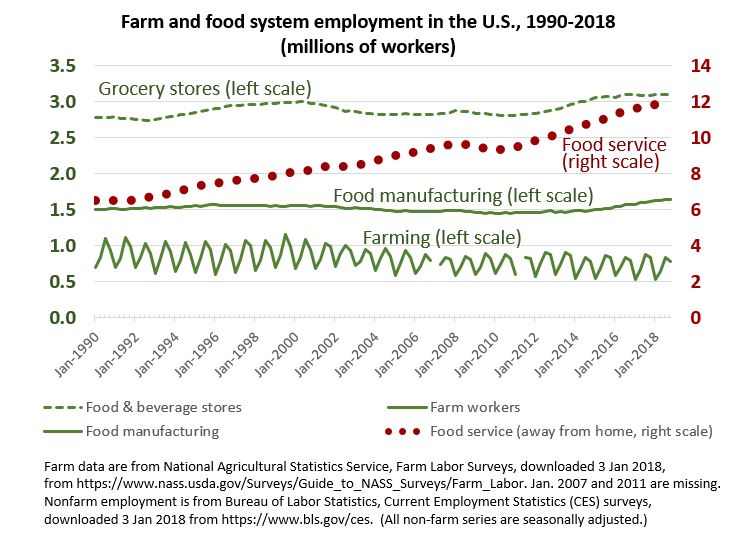 In summary…
Farm jobs are great.  I’ve had one, but it was seasonal (summer of 1984) and when I worked through the winter it was part-time.  Many more employment opportunities start after harvest, like my own high-school job making ice cream.  Since 1990, food manufacturing has consistently offered about twice as many jobs as farming, grocery retailing in food & beverage stores now provides about 4x the number of jobs in farming.  Employment in food retail rose from about 2.7 million to around 3.0 million jobs before the recession, and is now up to an all-time high of 3.1 million jobs.  But almost 3 million jobs have been added over the past decade in food services, including restaurants and workplace dining or other food consumed away from home, which rose from a recessionary low of 9.3 million jobs in January 2010 to an all-time high of over 12 million in October 2018.

Farms, food manufacturing, grocery stores and restaurant services are all interconnected.  Each plays a different role in the food system.  No farms, no food — but most of the labor is engaged after harvest, in processing and retail, especially in your local restaurants and other away-from-home food services.