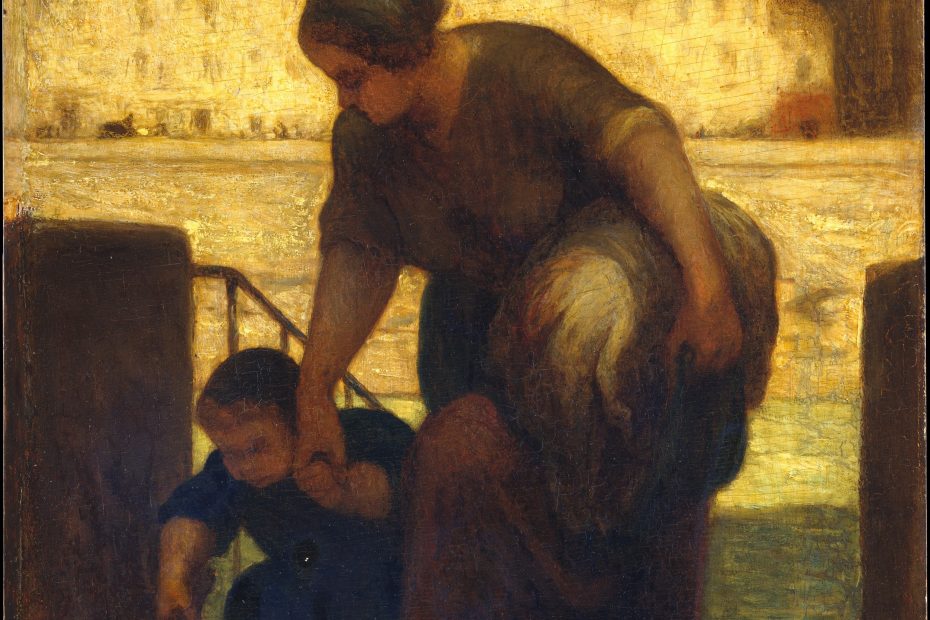 Image: The Laundress (1863) by Honoré Daumier Via metmuseum.org

What, then, do young people’s coping strategies look like? My research shows the following: A small group cope by de-emphasizing the seriousness of climate change — arguing that media and researchers exaggerate the seriousness of the problem or that the negative consequences will only be visible in the far future, so why should they care. A larger group worry but cope by avoiding information or by distracting themselves. These two groups cope, then, by using strategies not designed to support their becoming earth stewards.

Another common way to cope with the climate threat is to search for information, and think about what one can do to alleviate the problem, that is, using a problem-focused way of coping. Often this is about planning for and engaging in small actions such as stopping to eat meat and telling parents to take climate change seriously. Although this way of coping goes together with a feeling of empowerment, which is something positive, in two studies this coping strategy also was related to general negative affect among the young. Perhaps this was the case because these studies were conducted before the Fridays for future movement and the big climate change demonstrations, so the participants did not focus on collective engagement at all, only on small things that one can do in everyday life which perhaps put a too heavy burden on their shoulders.

Aside from the coping strategies just mentioned, there is another way that young people cope. This is by using meaning-focused coping, which is a strategy associated with both active engagement and well-being. To understand meaning-focused coping, one needs to shift from asking how young people regulate worries to asking how they promote hope. This hope can serve as a buffer and prevent worries from leading to low wellbeing or to undermining desire and ability to act. Meaning-focused coping consists of acknowledging the seriousness of the problem, but it also is about acknowledging there are reasons to be hopeful as well as opportunities to act to make a positive difference, no matter how small. This could be acknowledging that we have accumulated a great deal of knowledge about climate change – knowledge that will allow us to solve complex problems that we could not solve before. Acknowledging the positives in this way can also take the form of trusting scientists, environmental organizations, politicians, that is, more powerful actors who can take on most of the burden for solving problems so that the young need not feel overburdened.

How, then, can the knowledge of these coping strategies be included in climate change education and communication, as well as in environmental studies? Firstly, research shows that young people who de-emphasize the climate change problem think that teachers and parents do not take their negative emotions about societal and environmental problems seriously, while the opposite is true for those young people who use meaning-focused and problem-focused coping strategies. Therefore, a first step is to acknowledge and take seriously the emotions that young people express when learning about climate change – and to not worry about young peoples’ worries, but rather to acknowledge and validate their emotions. Doing so helps young people gain a sense of having some control.

In addition to validating the worries of young people, educators (and parents) can turn the discussion of global environmental problems into a discussion of values — such as the values of caring for animals and caring for those suffering from flooding, wildfires and other symptoms of climate change and environmental breakdown. To paraphrase scholars such as the philosopher Ernest Bloch and the educator Paulo Freire, to confront the dark is, paradoxically, a first step towards acquiring hope. This hope comes, then, from having a critical understanding of the current situation and a realization that something is missing and that we need to act.

Moreover, we need to focus on ways that cultural, discursive, and structural factors influence how young people cope with their negative emotions around climate change. The sociologist Zygmunt Bauman argued that people today have a hard time confronting negative emotions associated with societal problems and to do something constructive with them because our neoliberal culture promotes mostly positive and pleasurable emotions. Negative emotions are seen as dangerous because they can disrupt the neoliberal system. A culture that only focuses on positive emotions and that is discounting or discouraging negative emotions can lead to young people distancing themselves from climate change or limiting themselves to only individualized problem-focused strategies and a privatization of hope. Doing so keeps them from making demands for much needed structural changes in the ways societies address problems associated with climate change.

In acknowledging that coping is influenced by larger societal factors I have argued elsewhere that there is a need to go beyond promoting “emotional competence” so as to promote “critical emotional awareness”. This implies critically discussing and asking which emotions are allowed in climate change discussions and education. Whose emotions are taken seriously and whose are not? Do we treat boys and girls alike? Why do certain groups of students feel guilt or shame while others grow angry? Why do we use distancing and individualized strategies and not so much collective strategies? Are there other ways of coping with emotions related to climate change? What are the sources to build constructive hope? What implications do our feelings and coping strategies have for engagement and education? In other words, a critical emotional awareness approach calls for generating a whole host of questions and a commitment to discussion about possible answers.

In response to this argument for a critical emotional approach, some might claim that young people being engaged by adults to think critically about their emotions are actually steered to feel whatever adults would like them to feel. I argue the opposite is the case, or can and should be the case, because truly promoting critical emotional awareness means providing young people with knowledge and tools to expose any attempts to steer and govern them through emotions. As the educational sociologist Sarah Amsler puts it: “It is not about evoking the “right” emotions. Rather, it is about encouraging a critical understanding of why one experiences certain emotions and desires and not others”. And I would add that a critical emotional awareness approach fosters understanding of why one uses certain ways to cope and not others.

As is the case with many educational approaches, adopting a critical emotional awareness approach is demanding and requires thought, planning, and support. In order to help young people gain the strength to confront their worries and to take on a critical emotional awareness approach one can invite into the classroom actors who work in different ways to fight climate change and other sustainability problems regardless of difficulties and who therefore can be role models for the young. In addition and as scholars such as Michael Fielding have emphasized, it is important to promote friendships and “democratic fellowship” in the classroom. This approach hopefully leads to a trustful atmosphere that can aid learning about emotionally laden topics.

Another way to aid a critical emotional awareness approach is to take into account the developmental psychologist William Damon’s research about youth purpose. He found that the best way to experience meaning in life and to promote psychological well-being is to find a purpose that goes beyond a focus on oneself, that is, to commit to a bigger cause that includes other humans, society, or nature. Youth purpose also includes active collective engagement around this purpose. The big climate change demonstrations that have taken place in many different countries before the corona crisis, and that engaged a lot of young people, can be seen as a way to find purpose in life. The task for educators, therefore, is to think about and discuss how to include this youth engagement in climate change and environmental education. This is in line with educational theories such as “the action competence model” where giving students the opportunity to act, preferable together, is a vital aspect.

All this is to say that a critical emotional awareness approach can lead to a number of valuable outcomes related to young people becoming earth stewards. Whether it be finding values worth fighting for, reasons to be hopeful, a higher purpose to define oneself, or some other positive outcome, critical emotional awareness most probably can serve young people well in their development as earth stewards.

Maria Ojala is an associate professor in psychology at Örebro University, Sweden. She has also worked as an assistant professor at the Department of Education, Uppsala University. Her research interest concerns how young people think, feel, cope, act, learn, and communicate about global problems, specifically climate change. Maria has also written extensively on hope and climate change. She has published articles in for example Journal of Environmental Psychology, Futures, Journal of Youth Studies, Environment & Behavior, and Environmental Education Research.

previousOvercoming Racism to Recolor the Outdoors
nextThe Elephant-Human Relations Aid Program: Projects and Empathy for a Neighborhood of Friends