In February 2012, 17 year-old Thomas “T.J.” Lane entered his high school with a .22 caliber handgun, killed three of his classmates, and injured several others. Sadly, as school shootings have devastatingly become more commonplace each year in the United States, this is not the most shocking part of the story. At his sentencing in 2013, T.J. Lane not only demonstrated absolutely zero remorse, but actually seemed to experience pleasure at listening to the victim statements read by the families. Before their statements, he took off his dress shirt, revealing a t-shirt with letters written in marker, spelling “KILLER.” He continuously smiled and smirked as they described their anguish. He even went so far to tell the families about how he fantasized about their sons’ deaths (though in much cruder language than I just communicated—the video is available on YouTube, but if you choose to watch, be forewarned about the crudeness of his statements). 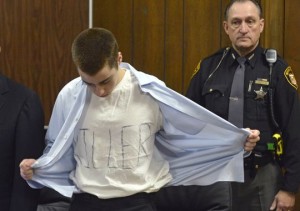 T.J. Lane at his sentencing 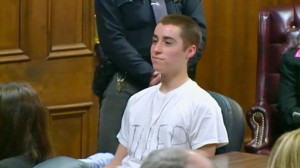 Smirking while listening to the family’s victim impact statements

There is an innumerable amount of books, television shows, movies, documentaries, etc about criminals, especially on those who inflict exorbitant pain on others. We clearly are fascinated with the topic. Why? It seems truly unbelievable that a human being could contemplate, let alone carry out, these types of actions. How could another person possess such a different moral compass than our own? How could a human being possibly be motivated to kill, sometimes without motive, and experience absolutely zero remorse? Admittedly– as truly horrible as it is– it is also fascinating, and a subject to which psychologists and neuroscientists have dedicated a good deal of research.

In my first post on the theme of “Failures in Empathy,” I described various contexts in which regular people can be motivated to demonstrate a lack of empathy towards others. This week, however, I am shifting gears to explore one of the most striking examples within the realm of empathic failure: Psychopathy. This week’s theme represents the opposite thesis of that presented in the previous post, in that it will explore the ways in which empathic failures manifest themselves in entirely atypical individuals.

Psychopathy is defined by callous, impulsive, and antisocial thoughts and behavior. Psychopaths tend to experience no fear of punishment and a lack of emotional sensitivity and reactivity (Decety et al., 2013).  In other words, psychopaths are, in part, definitionally characterized by their empathic failures. But what are the mechanisms that underlie an almost constant lack of empathy? What is the difference between most of us, who require sufficient motivation to experience a small taste of empathic failure, and psychopaths, whose mere baseline seems to be represented by empathic deficiency?  What made T.J. Lane so inexplicably heartless about the deaths of his victims, whereas most of us may become distressed by merely watching his reaction, let alone by imagining his cruel acts?

In order to examine the underlying mechanisms of empathic deficiencies in psychopathy, it may be helpful to parse the concept of empathy further. Empathy consists of three components: a.) an affective component, which often entails sharing the emotion of the target individual (e.g. feeling distress at another person’s distress) b.) a cognitive component, which involves the capacity to take the perspective of another person. and c.) a regulatory component, in which one is able to monitor the origins of the feelings (self vs. other) (Lamm et al., 2007). As such, empathy generally has two overarching facets: the affective (emotional) and the cognitive.  While the cognitive facet allows us to recognize what the other person is feeling (and to keep in mind that the origin of the feelings stems from observing the other person), the affective facet prompts us to ‘feel’ as the other person feels.

Research has shown that psychopaths are not deficient in all components of empathy. In fact, a number of studies have demonstrated that only the affective component is implicated in psychopathy, while the level of cognitive functioning remains relatively normal (see Blair, 2005 for a review). Simply put, psychopaths realize, recognize, and fully comprehend the distress their victims are feeling. They simply, though, do not feel it themselves.

The results of the Decety et al. (2013) study were also provocative in another important way— finding increased activation of the amydala in the psychopathic individuals. The vast majority of neuroscientific research on psychopathy has shown that psychopaths show greatly reduced amygdala functioning. This makes sense, as the amygdala is most notably known for its role in fear conditioning, a paradigm in which a previously neutral stimulus is paired with a fear-inducing stimulus to generate a fear response (see LeDoux, 1996). Psychopaths have been shown to exhibit very poor fear conditioning (are very difficult to induce with fear), and thus, decreased amygdala functioning (Blair, 2007). In fact, poor fear conditioning and the corresponding decreased amygdala response in 3 year olds have been shown to predict degree of psychopathy in the same individuals as adults (Gao et al., 2010—a study I just learned about this morning in an awesome talk by Adrian Raine here at Tufts!).

If psychopaths themselves are much less sensitive to fear than normal individuals, it would not be an outlandish conjecture that they would be extremely insensitive to others’ fear. Accordingly, Marsh and Cardinale (2012) found that psychopaths were significantly impaired in identifying statements/behaviors that could cause fear (e.g. “I could easily hurt you”; “You better watch your back.”), as well as in judging the moral acceptability of these statements/behaviors. Compared to controls, psychopaths were less able to recognize fear-inducing statements (compared other emotions of ‘anger’, ‘disgust’, ‘happiness’, and ‘sadness’), and also judged the fear statements to more acceptable. Thus, while a good deal of research has shown that psychopaths are still typically able to recognize others’ emotions, ‘fear’ (a highly empathy-eliciting emotion) may be the exception.

In this post I have presented the ways in which very atypical individuals exhibit empathic failures. In the next post, I will return to a context in which empathic failures manifest in us all: when our group memberships take over.

Batson, C., Early, S., & Salvarini, G. (1997). Perspective taking: imagining how another feels versus imagining how you would feel. Personality and Social Psychological Bulletin, 23, 751–758.

Blair, R. (2005). Responding to the emotions of others: dissociating forms of empathy through the study of typical and psychiatric populations. Conscious Cognition, 14, 698–718.

Decety, J., Chen, C., Harenski, C. L., & Kiehl, K. A. (2013). An fMRI study of affective perspective taking in individuals with psychopathy: imagining another in pain does not evoke empathy. Frontiers in Human Neuroscience, 7, 489.