When I set out to research and write this blog post on the role of SSRi’s in treating OCD, I learned that OCD is no longer classified as an anxiety disorder in the DSM-V, but is in a new category of Obsessive-Compulsive and related disorders. I can attest to the anxiety that comes with OCD, and I have always been comforted explaining to people that OCD is “just another anxiety disorder.” It makes the condition seem normal, somehow common. So why did the expert DSM-V updaters make the change? In this blog post I will present two reasons why OCD is no longer lumped together with GAD, SAD, and all the other AD’s. 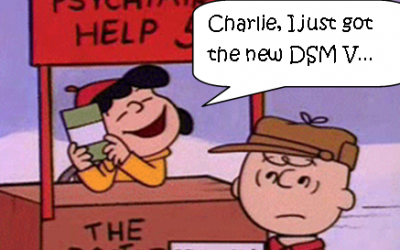 The Neurochemistry
The neurochemistry found in OCD patients, and other obsessive compulsive disorders, is distinct from the features that characterize other anxiety disorders (Stein et al., 2010). Recent imaging research has shown that frontal striatal pathways are the malfunctioning neurocircuit that causes OCD symptoms (Goodman, 2014). Further proof for this finding comes from a study that used neuroimaging results to show that abnormalities of activation in the head of the caudate nucleus, the thymus, and the orbital gyri decreased significantly in patients that underwent successful non psychopharmacological treatment for OCD (Shwartz et al., 1996).
The Executive functioning (EF) Hypothesis
Research suggests that OCD is related to problems with executive functioning, where as other anxiety disorders are a result of emotion processing issues (Stein et al., 2010). A recent Meta-analysis of studies assessing executive functioning in people with OCD showed “that individuals with OCD are impaired on tasks measuring most aspects of EF, consistent with broad impairment in EF” (Snyder, 2014). Measures of executive functioning include an individual’s ability to shift between tasks, cognitive flexibility, and inhibition. Anyone familiar with OCD, can attest to inflexibility and repetitive behavior that may be a result of this EF impairment. Neuroimaging research that implicates the prefrontal striatal cortex as an important location for executive functioning in the brain, supports the theory that malfunctioning in this brain area causes OCD.

The moral of the story is that OCD is no longer categorized as an anxiety disorder in the DSM. Does OCD almost always involve anxiety? Absolutely. Is OCD often comorbid with an anxiety disorder? Yes. However, experts in the field believe that the underlying differences between Obsessive-compulsive disorders and anxiety disorder are significant enough to merit a separate category. What’s done is done (at least until the next DSM). What remains to be seen, is how the conceptualization of OCD will change in our society and what effect this change will have on treatment.

• For more information on the neurocircuitry, executive functioning, and other distinctions between OCD and anxiety disorders not covered here, I highly recommend taking a look at the following review!
http://www.dsm5.org/Research/Documents/Stein_OCD.pdf