The focus of my blog posts so far has been on the relationship between threat-relevant attentional biases and social anxiety disorder (SAD). One way to test whether a certain process plays a part in the etiology of a disorder is to manipulate this process and examine the effect of this manipulation on the symptomatology. In this blog post, I will review several therapy-outcome studies that used attentional bias modification (ABM) training in patients with SAD.

“What exactly is ABM training?” you may ask. In most cases, studies use a modified version of the dot-probe paradigm to reduce attentional bias for threat. As a reminder, during the original dot-probe paradigm, participants are first asked to stare at a fixation cross at the center of a computer screen. Then, two stimuli, one threatening and one neutral, appear on either side of the screen. After these stimuli are presented for a certain amount of time, a dot is presented at the location of one of the previous stimuli. Participants are then asked to report the location of this dot as quickly as possible through a button press. If a participant responds more quickly to dots after they have replaced threatening stimuli (compared to neutral stimuli), researchers conclude that the participant has vigilance to threat. During ABM training, the original task is modified in such a way that the dot probe nearly always replaces the neutral stimuli, therefore training the participant to attend to the non-threatening stimuli.

Although most studies to date have focused on the effect of ABM training on self-reported symptomatology of social anxiety (e.g. Amir, Beard, Taylor, Klumpp, Elias, & Chen, 2009) here I want to highlight a unique study by Heeren, Reese, McNally, and Philippot (2012) that investigated the subjective, behavioral, and physiological outcomes of ABM training toward and away from social threat. In this study, researchers randomly assigned participants with SAD to attend positive stimuli, threat stimuli, and to attend to both in alternating blocks (control) in an attempt to understand whether attention training is  effective because of increased attention toward positive stimuli (and away from threat stimuli) or because of increased general attentional control (regardless of valence). After ABM training, participants were asked to give a speech during which researchers recorded behavioral (speech performance) and physiological (skin conductance) responses to stress. 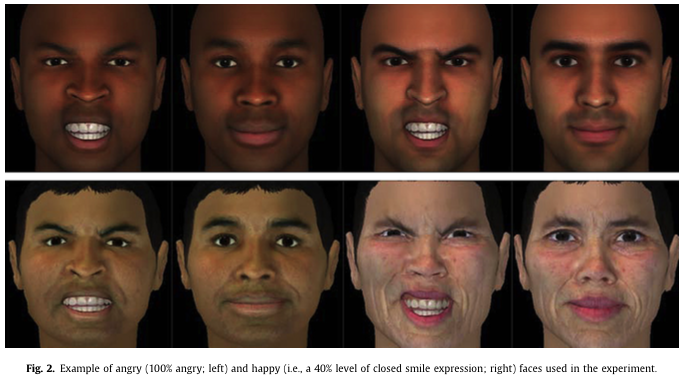 Consistent with previous studies, participants who were trained to attend to positive stimuli reported greater reductions in self-reported social anxiety, both post-training and during a 2-week follow-up, compared to those who were trained to attend to threat stimuli and controls. They also reported greater reductions in behavioral manifestations of anxiety and physiological responses to the speech task. Control training only reduced self-reported distress at post-training.

Encouraged by this and many other studies that show positive outcomes in the lab, you might think: “Wow! Such a simple training and such positive results! Let’s make this more widely and easily accessible!” Well, if you have, you’re not the first one. Researchers have been exploring ways to make this type of training readily available and easily accessible to the public. Recent studies have developed versions of the training that can be administered via the Internet, however, disappointingly have not found encouraging results. Most studies I reviewed, be it ABM administered on a PC (Boettcher, Berger, & Renneberg, 2011; Carlbring, Apelstrand, Sehlin, Amir, Rousseau, Hoffman, Andersson, 2012; Neubauer, von Auer, Murray, Petermann, Helbig-Lang, & Gerlach, 2013) or a smartphone (Enock, Hofmann, & McNally, 2014) reported a decrease in SAD symptoms over time, but in both treatment and control groups; therefore were unable to attribute the changes to the training.

What might be some of the differences between administering this training in the laboratory setting compared to a real-world setting? Although this has not been empirically tested, researchers speculate that this may be due to several factors, such as: higher demand characteristics at a lab setting (although this doesn’t explain the physio findings), or inability to properly control the experiment, higher probability of distractions, or participants taking the task less seriously in the home setting. It is also possible that participants were in a state of higher anxiety and arousal in the lab, which somehow enabled their learning (Neuabauer et al., 2013).

Taking all of this in and going back to my initial question about whether threat-relevant attentional biases have a role in explaining the etiology of SAD, all we can say right now is that the evidence is inconclusive. Based on my earlier posts, there seems to be evidence that these biases exist in social anxiety, however the treatment studies outlined here where these biases are modified have given us disappointing results so far. To further these concerns, there are very few studies that use behavioral or physiological measures as indicators of change, and no neuroimaging studies to date that examine whether any changes occur in the brains of patients with SAD following ABM training.

And in terms of applications… for now, easily accessible and cheap internet-based ABM training seems like an exciting but somewhat disappointing treatment option for SAD. Perhaps we need therapists after all.