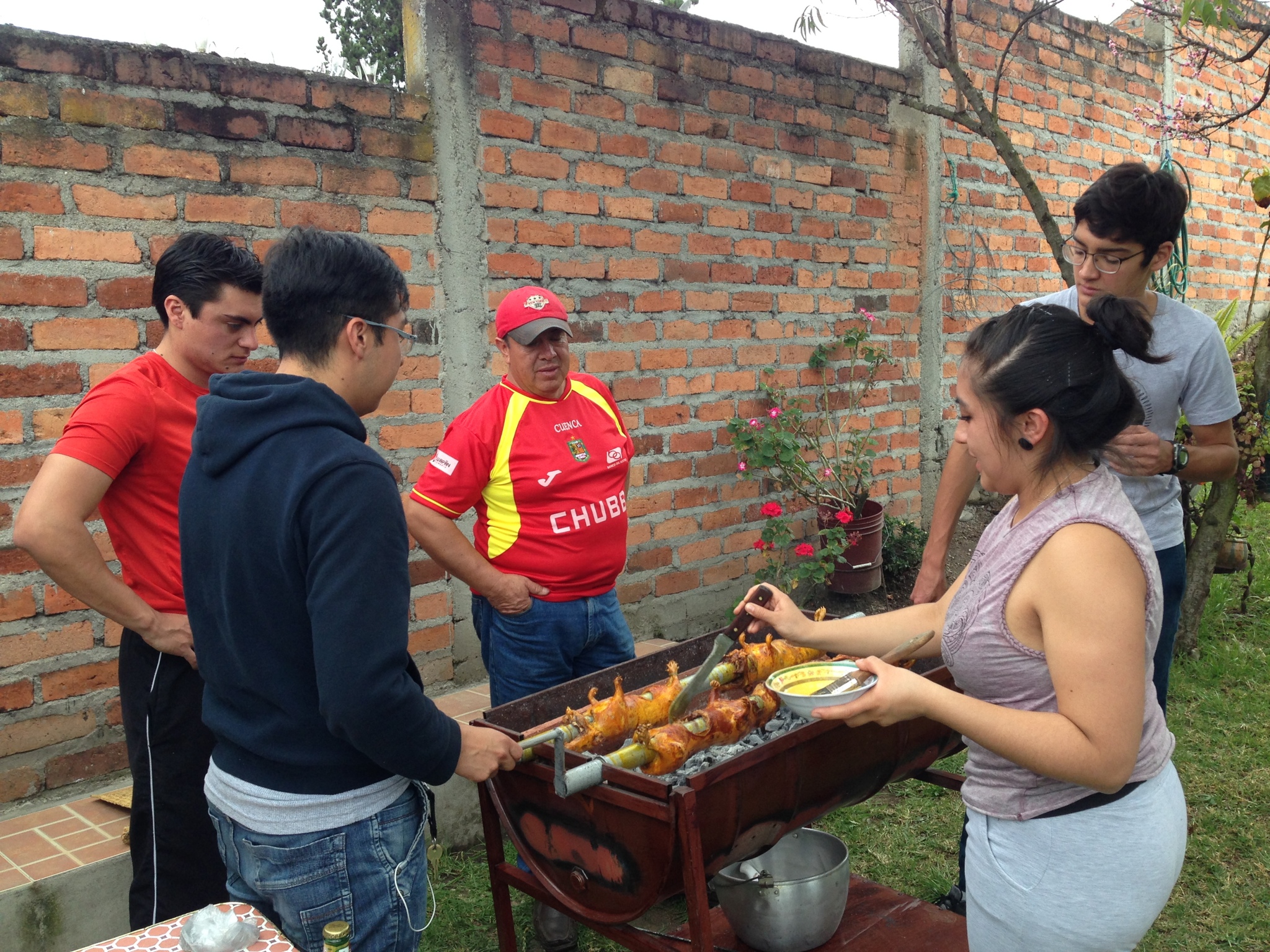 On Sunday, I ate a guinea pig

And I liked it.

Last week, my host father told me we were going to have cuy (aka those hefty, big-eyed rat pets) on Sunday for my sister’s birthday and that I could invite a couple friends over to join in the feast. Here in Ecuador, cuy is a local delicacy and beloved among many Ecuadorians (in a slightly different way than guinea pigs are beloved in the United States). I was skeptical though; I had seen people preparing (impaling them on poles 3 inches in diameter and spinning them over hot coals) cuy on the street, and I cannot say that it made my mouth water. However, I was willing to try it. When the day came, my family pulled out the portly rat–rotators and un–gently lowered the animals onto the pointy ends. My friends and I had the honorable duty of spinning the poles, while my host sister painted the cuy with a mystery sauce, literally using a paintbrush. We spun and spun, until someone told us they were done being spun. My host father slid the four small crisped corpses from the pole, chopped them into pieces, and served them to us. When I first got my portion, my only utensil was a spoon, just like at every meal in my house (my only explanation for this is that they eat a lot of soup), so I poked and prodded at the flesh for about 5 minutes until I realized it was hopeless. Cuy does not have that much meat on it to begin with, and the meat that is to be had has to be earned. The only way to eat it is to rip the meat apart with your hands and sometimes teeth, when your hands aren’t sharp enough to do the job.

There is something different about eating something entirely with your hands, especially when that something is a small animal. It feels more primal, more vicious, but also more real. In a weird way, I felt more connected to the animal I was eating than if it had been filleted into neat identical, breaded pieces and I had sliced it up with a fork and knife. In the United States, we are experts at disconnecting ourselves as much as possible from our food. Our meat comes in the form of hot dogs, hamburgers, chicken nuggets; very rarely does it resemble anything close to a once living breathing animal. It was refreshing to experience food in this new for me, yet very old way.
I had never eaten an animal smaller than a small chicken before, so I don’t have much to compare it to, but imagine a very juicy and salty big rat, and you are basically there. The small slivers of meat I was able to tear off from the body seemed to melt on my tongue like a snowflake does when you bring it inside to show people. I also had chicken and salad and potatoes and obviously rice to go with it, and it was one of the best meals I’ve had in Ecuador.
Another strange aspect of Sunday was how I approached the meal. On the one hand, I was having my friends over to my house for the first time to meet my family. That’s the mindset I went into it with. I introduced them to my host parents and siblings, I showed them my room, and we played basketball in my backyard. Later however, as I was sitting there with my friends eating those small creatures, I realized that, yes, I have known my host family for about 3 weeks longer than my friends, but that’s barely anything. We are just three gringos eating guinea pigs with these nice Ecuadorian people, who, without the 1+4 program, I probably never would have come within 100 miles of. It was a pretty surreal moment. I realized how much I already feel like a part of the family even though I’ve only been here a few weeks. And also how strange and special this experience is, to be taken in by and live with some random family for nine months in a completely unfamiliar place. And to think that they signed up for this without even knowing my name? What if I was annoying and insufferable? What if I am? What a risky undertaking. It is a pretty crazy situation, and I am so grateful to be a part of it.

One Reply to “Guinea Pigs are Food, not Friends”