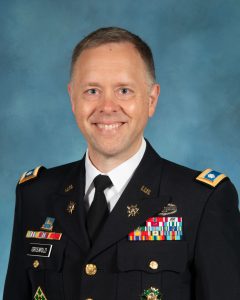 Lieutenant Colonel John Griswold of South Windsor, Connecticut, was commissioned as a military intelligence officer through the Army ROTC program at Georgetown University in 1999. He is an Army Strategist currently serving as a U.S. Army War College Fellow in the International Security Studies Program at the Fletcher School of Law and Diplomacy, Tufts University in Medford, Massachusetts.

Prior to his fellowship, LTC Griswold served as the Strategy Branch Chief at U.S. Africa Command, Stuttgart, Germany. While there, LTC Griswold was the lead planner for the U.S.Africa Command Campaign Plan, which charts the command’s strategic objectives and priorities over a 2-5 year timespan.

LTC Griswold previously served as the Chief of Plans for U.S. Forces, Japan at Yokota Air Base, where he led the development of contingency plans supporting U.S. Indo-Pacific Command in Northeast Asia, and bilateral contingency planning with the Japan Joint Staff and the Government of Japan. He previously served as a strategic planner at the U.S. European Command in Stuttgart, Germany, from 2014-2016, focused on the Russia problem set. He also served as an Assistant Professor of American Politics, Policy and Strategy program in the Department of Social Sciences at the United States Military Academy at West Point from 2010-2013, where he taught courses in American politics, international relations, homeland security, civil-military relations, intelligence and policy, and American political development.

Before becoming an Army Strategist, LTC Griswold’s assignments as an intelligence officer included various leadership and staff positions as an intelligence officer in light infantry, combat engineer, and Stryker infantry units based at Fort Lewis, Washington. He has deployed twice in support of Operation Iraqi Freedom: to Tikrit, Iraq from 2003-2004, as the Battalion Intelligence Officer for the 14th Combat Engineer Battalion, and to Taji and Baqubah, Iraq from 2007-2008 as the Brigade Intelligence Planner for 4th Brigade, 2d Infantry Division.