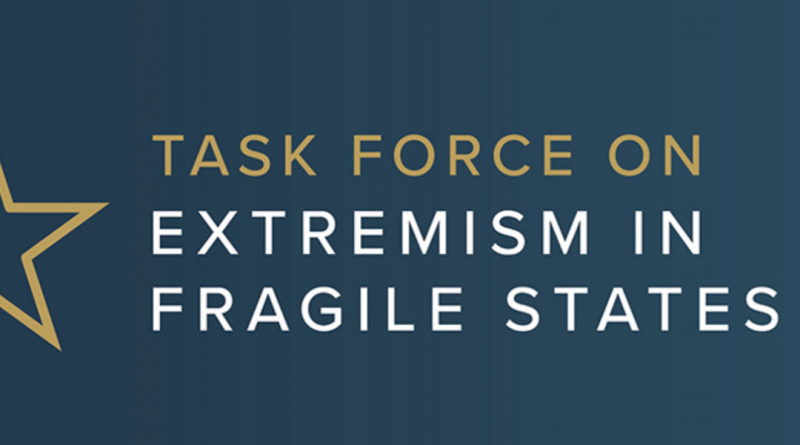 At Long Last, a Better Response to Confronting Violent Conflict

by Ruth Rhoads Allen and Neil A. Levine

On February 26, the U.S. Institute of Peace released the final report of its Task Force on Extremism in Fragile States. Commissioned by Congress, the report offers a significant policy contribution to how the United States engages on one of the most difficult and complex national security challenges facing the country.

As a broad call for action spanning all aspects of U.S. national power and international influence – diplomatic, economic, informational, and security-focused – the report also acknowledges that progress will take time and will not always be linear.

Most significantly: without the commitment of local leaders interested in building trust in their states and societies, the approach is unlikely to take hold. It therefore asks stakeholders to demonstrate humility, patience, discipline, and a posture to seek understanding as we act in a more “strategic, coordinated and timely” way to advance the U.S. national security interest.

In commissioning USIP’s Task Force, Congress allowed the latitude for uncharacteristic candor from the report authors.  It notes that the 9/11 Commission report call for a preventive strategy went unanswered. The report also observes how well-intentioned external actors have sometimes done more harm than good. And most of all, the report pulls no punches in acknowledging political will as the primary impediment to acting on its prescriptions: “More often than not, the United States and its partners lose focus on prevention, fail to work with and through communities, fail to integrate development, diplomacy and defense interventions, or fail to follow-up on hard won gains.”

For “bridging organizations” like CDA Collaborative, as well as other governmental and nongovernmental actors that are asked to work with and implement the new approach, these ideas are welcome. The importance of listening to and supporting local actors to accept greater risk – and even fail – to learn what approaches are truly impactful would mark a major advance in the way our field operates today. Building on a decade of experience and research from military, humanitarian, development, and peacebuilding arenas, the report highlights best practices of prevention initiatives. It prioritizes the centrality of inclusion, particularly of youth and women, the need for efforts with explicit rather than implied democracy and governance goals, and the importance of learning and knowledge management, including sharing of experience throughout the system. Each of these areas are woefully under-resourced in the U.S., and too frequently are not coordinated with global allies.

Ultimately, the success of the approach detailed by USIP hinges on leadership.

The report explains the need for “leadership at the highest levels of the U.S. government to ensure that agencies strike a better balance between preventive action and crisis response.”  This is so much easier said than done and is the primary reason so few elements of the U.S. response to violent extremism has changed since 9/11. Between the built-in reflex to respond to each crisis at hand and the preference for spending U.S. economic assistance on more tangible problems such as health and education, peacebuilding and conflict response programs receive more rhetoric than resources. Close collaboration by the executive and legislative branch on this point will be the central task of leadership in changing our current approach to that outlined by USIP.

USIP’s Task Force report shines a bring light on the path forward. Now U.S. leaders must find the will – and the wallet – to follow it.

Neil A. Levine chairs the Board of Directors of CDA Collaborative Learning. He is the former director of USAID’s Office of Conflict Management and Mitigation and the Center of Excellence for Democracy, Human and Governance. Ruth Rhoads Allen is the Chief Collaboration Officer of CDA Collaborative Learning. She is the former director of Governance and Partnerships at Mercy Corps and served on the board of the Alliance for Peacebuilding. The views and opinions expressed in this blog are those of the authors and do not necessarily reflect any official positions of CDA.

CDA Collaborative Learning (CDA) is an action research and advisory organization that bridges the gap between theory and practice to improve the effectiveness of peacebuilding, development, and humanitarian organizations, and responsible businesses working in fragile and conflict-affected contexts. By strengthening the work of our partners, CDA contributes to positive, systematic, and lasting change for people and communities. CDA applies a unique collaborative approach to learning that prioritizes local perspectives, rigorous analysis, and evidence-based methodologies to produce practical guidance for policymakers and practitioners alike. In 2019 CDA is celebrating the 20th anniversary of the Do No Harm Framework, which changed the conversation about how aid contributes to peace and conflict. See how we continue to apply these principles and learning to collective impact, localization, responsible business at www.cdacollaborative.org