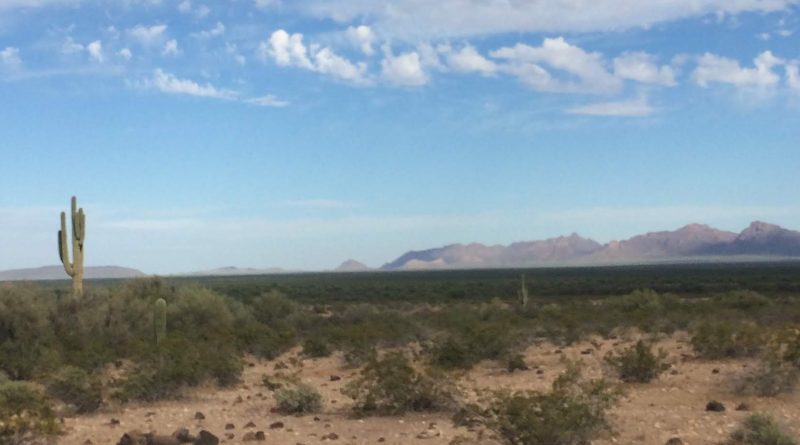 Indigenous Tongues in the Sonoran Desert: A reflection on Indigenous politics on the U.S.-Mexico border

Every day in a stretch of the Sonoran Desert a massive and mostly unseen movement of people negotiate the messy web of international migration policy. Combining the Yuma and Tucson sectors of U.S. Border Patrol operations for 2000-2018, 5,549,086 individuals have been apprehended for illegal entry in this swath of harsh desert and mountains.[1] There is currently no data recording how many of these individuals come from indigenous communities or speak indigenous dialects, as little has been collected around migrants from these groups. However, recent research has found that due to existing conditions of hardship, “people in communities with relatively high indigenous populations are more likely to migrate as undocumented rather than documented migrants.”[2] From my firsthand experience working in the U.S. borderlands, I can reflect on the implications of so many indigenous people intent on making this country their home, at least temporarily.

Between December 2018 and July 2019, I spent time along the U.S.-Mexico border in Baja, California, Arizona, and Sonora. I observed, participated in, and heard about only a slice of the challenges, tragedies, and triumphs shared by the millions who have left Central America and Mexico to head north. I worked with NGOs, including Al Otro Lado in Tijuana, who were responding to the massive increase in asylum cases and claims, as well as longtime humanitarian organizations affiliated with No More Deaths, who work to relive suffering and prevent deaths in undocumented crossings in the Sonoran Desert. Before this, I also traveled in southern Mexico, documenting indigenous and campesino collectives and political organizations, trying to understand their diverse struggles for territory and self-determination in Oaxaca and Chiapas. A reality of the crisis at the border rarely discussed by policymakers and commentators but constantly negotiated and dealt with on the ground, is the extent to which this crisis is defined by the complex politics of indigenous communities that straddle the Americas and are rooted in  conflicts over land and resources.

Through translating testimonies of why many from Mexico, Guatemala, Honduras, and El Salvador fled their homes, and having conversations with patients in the Sonoran Desert when  I volunteered in a remote respite-camp, I picked up countless stories of tremendous courage and tragedy. I do not have permission to divulge them nor do I have any interest in doing so, but I can describe what I heard: patterns of dispossession, the familiar accent of indigenous language speakers, the same story articulated with distinct details of family deaths, threats, and loss. From Tijuana to Nogales, across the Arizona-Sonora border, in Tucson’s Operation Streamline judicial proceedings, and on a Greyhound headed back to New York City, indigenous people from Guerrero, Chihuahua, Oaxaca, Chiapas, Petén, Alta Verapaz, Santa Rosa, and Intibucá were always present.

The crisis on the U.S-Mexico border is equally a political question of indigenous communities across the region, because the politics that traverse indigenous communities are not  isolated to a marginal population, but rather an underlying force in the region’s international politics. As much as mitigating the border crisis requires immediate action in terms of U.S. and Mexican immigration policy and border patrol, the root of the exodus lies in the complex web of resource extraction, indigenous rights abuses, and agrarian and international economic policies, none of which feature in U.S. approaches to the issue.

A conversation I had with one man who had left his countryside home for the first time has stuck with me. Explaining why he had left in Spanish (first asking his adolescent son to translate) he said, pointing upwards as if whoever ‘ran’ things were high above him: “porque ellos quieren desarrollo.” Because ‘they’ want development, he and his son had to leave their home.

Several scholars have argued that the driving force of migrants north cannot be chalked up to the simplistic narratives of “gang-violence” or “economic duress,” but rather are due to a more complex intermingling of violence and displacement embedded into territories rich with resources,  whose occupants are campesino and indigenous communities. Professors Dawn Paley and Ariadna Estévez have made this case. They argue that infrastructural projects, mines, expanding agricultural industrialization, and hydrocarbon extraction are driving thousands of people out of their homes through a mix of state and paramilitary violence.[3]

Adherence to principles outlined in international declarations, treaties, and customary international law are central to strategically approaching the root cause of the migrant crisis. In particular, articles and legislative instruments designed to defend indigenous land and the consensual use of their resources, such as the United Nations Declaration of the Rights of Indigenous Peoples, and the International Labor Organization’s Convention 169. Strengthening existing domestic and international institutions that support these efforts is critical in curbing the root causes driving the present migrant crisis.

Dillon was born and raised in the Midwest of the U.S. to Mexican and Korean parents, and graduated from the University of Michigan with a degree in Sociology. His work has focused on the nexus of migration, trade liberalization, and infrastructural development in Latin America, primarily Mexico. His interests lie in international business, economic law, and conflict negotiation and resolution in the greater East and South Asian region.

[2] Asad L Asad and Jackelyn Hwang, “Migration to the United States from Indigenous Communities in Mexico.” The ANNALS of the American Academy of Political and Social Science 684, no. 1 (2019): 120–145.